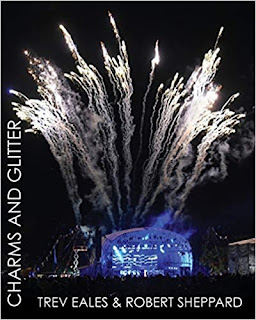 The ‘Festival Season’ is upon us – but there are no music festivals this year. Why not experience the on-page festival our book presents, with its images of, and poems about, stars and newbies at their performative best. Available from Knives, Forks and Spoons now, both as a hardback and paperback.

Illustrated with 62 sumptuous full colour images, Charms and Glitter by Trev Eales and Robert Sheppard, published by Knives Forks and Spoons, brings you onto the stage at  major music festivals to get up close with seminal and emerging bands and artists, including The Rolling Stones, Blondie, IAMDDB, Bon Jovi, Blur, Lianne La Havas, and Paul Weller.

Trev Eales’ striking photographs are accompanied by poems by me, which attempt to capture something of what is visible of the interiority of the musicians. Together, we hope we evoke the colours, energy, passion and mayhem that comprise the fabric of music festivals.

Brilliantly designed and published by Alec Newman: thanks Alec!


These links will take you closer to the book, both hardback and paperback: 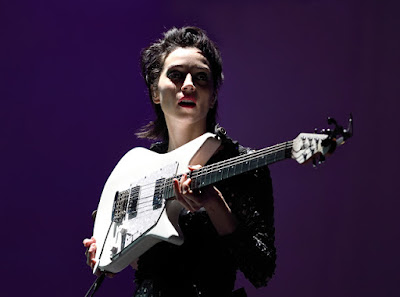 
at everything she causes, finding
in her findings


the New Result. Lift
into ritual her white


guitar, and wait. Her
offering is this note,


and she presses it,
watches the process.


She holds it with her
half-painted fingernail,


a little negligence in this
vital operation


at the centre of
the New Charm. She counts

herself into her
playing. Her throat threatens,


her chin catches, the guitar’s
curve, glows, a cyber-glitch


on the glitzy Long March –
unbruised by shadow.


Here are links to the other two poems which form ‘Gallery 7’ to which this poem belongs: Debbie Harry and Patti Smith. HERE.

Trev Eales is a photographer specialising in live music who lives in Cumbria. For over 20 years, beginning in the early 1990s, he photographed for WOMAD. Over the past 10 years he has contributed as a photographer and reviewer to a variety of online publications covering major UK music festivals: Glastonbury, Reading, Isle of Wight, TRNSMT etc. Photographs and reviews: efestivals.co.uk  Web: trev-eales.co.uk.

Robert Sheppard is a poet who lives in Liverpool. His last KFS publication was Hap: Understudies of Thomas Wyatt’s Petrarch. His selected poems, History or Sleep, is available from Shearsman, which also publish The Robert Sheppard Companion, edited by James Byrne and Christopher Madden; it features essays on his work. Co-editor of Atlantic Drift, he is also a critic of contemporary poetry. Emeritus Professor at Edge Hill University. Web: robertsheppard.weebly.com.

Some other images and poems appear online but without the colour and design of the splendid book.

Or you could just check out the sample pages on the Knives Forks and Spoons site!

Posted by Robert Sheppard at 7:00 pm