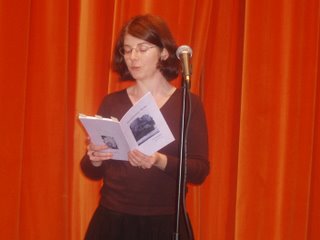 Posted by Robert Sheppard at 1:50 pm

Wind a Dead Tired No More


Rushed in flesh stretched tubes before the word was known, before the actual canal was mine in my mother’s reality. The fluidity of pulsing plasma, bloody composition in it’s growing groaning vessels, whistling ore the rim to sound an eeriness that sings of hairy animal strangeness, ever changing

Wind in double u’s and dees but alone as if there existed only one ebbing and flowing in a turmoil of molecules lowing over Venice, France, the Veldt, Innisowen, Benbulbin, Paraggi, but never Birmingham

It is light. I am in a space in-between. Standing up. The woman I know floats by baby pink doll material movement, then back again. That is all

Outside is different. I listen to the suck and furl dragging from somewhere to toss a wholeness of all air holding sway in the whorlground. A million tinsel ties on branches taped out to the thinnest tinness in flurries of perfect pitch. A metallurgist injecting leaves with liquid elements to solidify in the airy presence of others

Heard and recognised, modulation in constant stream of sentence, the sense of intention imagined in their pitch pull depth scale rising hang, then hung

The swirl around some vortex of shuddering skylight, roof and room a distant rush mellowing to whooshing circular motion. Three sides open, two glassed the loudness the pitch increased decreased in inches of frame pushed pulled. What change a circle square or cube? Break down these walls my castle

To the Power of Signs

Childhood’s lost language in natural ascendancy rehearses arise regroups in head the flash of gathering tribes see sawing the fierce and loyal actors and doers, pull pushed in the finest fiery words which pacify pump plump pacify pump plump consensus of a warless or warring force that will be still or will be fast fearless in active bloodlines of the Queen

The bard winds his tail through master warrior runner server in halls of fire praise to the God of Trees, boar dripping spit fuel swelling the flames to spiral conspire twist and curl in mellow burnt orange on the famish feast, feeling the words snuff nose picture this rich in the history of ash carbon dust hurling down green roads of connection

Exotic, it is not. Nor absent from the impact. In that Ambre Solaire moment, the blue chlorine pooled tinkle laughter shrieked on a summer’s day, resonant and rightfully owning all the airwaves. Tobacco juiced brown on my finger sister skin, rolled to break down what it offers, tracing the experience of tweedy aromas, clinging peat smokiness rack tacked to nerve ends in diminishing sense until one day a passer by retrieved

Turkish delighted or body shopped tea citrussy fresh with a colour that lies of lemon connections, and black velvelteen deep. Assulted outside my door purpled and bushy scenting the way. Scrambled on Ligurian hills boar family thicket in autumnal pursuit of fear. Perugia materialising in you, your young on a hillside in seasoned wilderness and sage. A sudden drop to be fodder forgotten

The panic attack stench of a Cologne train station high summer heat flies. Lies between friends ride on expectations directionless alien cities sense loss in the break down rip up tear of redundant maps. You oblivious wanting to be found. Finding you at that pissed up place exhausted out of all. Waiting to be told. What to grow to

A barrier for some

Dee MacMahon is an Irish poet living and working in Ormskir. A former student of the MA in Writing Studies at Edge Hill University, she is currenly a member of the universitiy's Poetry and Poetics Research Group.
Posted by Robert Sheppard at 1:19 pm 1 comment: 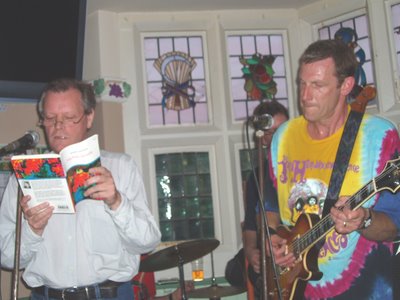 This is what happened to me. Tony thrust a copy of Tin Pan Arcadia into my hands and made me get up on stage and not sing, which I might have predicted, but read a passage from 'Smokestack Lightning' (printed below), which is something he always does when they play 'Motherless Child Blues'. Written about 1930 by Barbecue Bob, this song was one that Tony and I used to do, but which he now plays as an electric up-tempo number. However when I read it, the band softened to a Bob Diddley shuffle and I read these words:

Kid Bailey's the name I travel with, kidding
around: the name on the only phonograph;
walked up to the shop window, the glitter
of the diamond-fretted Dobro a death squad
tuning up. My handkerchief shields
the chord shapes from
your thieving eyes. Just pull the razor
and shave him. The gun in the guitar case was
no use - jealous man stepped up to Charley
as if to ask for Pony, retuned. Bill-
boards tell women what
to be: a circle of music-stands
dreaming thrills, dancing the Shimmy-She-Wobble -
some guy called it a dry fuck -
the guitar dances too, spins
above Charley's head. I could see
my own rapt reflection in the shine,
an invisible piano whose pedals are moody
bendings. Love my suitcase and the road.

(You can see a very different performance of the poem from 2008, here.) 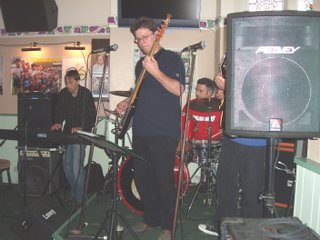 This is the rest of The Blind Lemons (Tony is behind the amp.)
Posted by Robert Sheppard at 2:15 pm 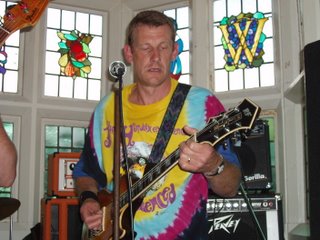 This is my friend Tony Parsons, to whom I dedicated my poem 'Smokestack Lightning', and with whom I used to sing in Little Albert Fly, playing in his new T-shirt at his own 50th birthday party with his band The Blind Lemons. A glutton for punishment, he also played with another band he plays in, The Ant Hill Mob. The event took place in the Duke of Wellington, Shoreham-by-Sea, Sussex, on 7th July 2006. The guitar's called Nellie.
Posted by Robert Sheppard at 2:01 pm