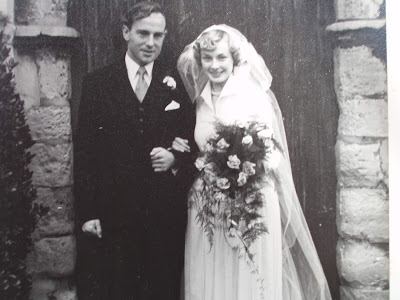 I read the following at my father's funeral at Worthing Crematorium, 1st August 2013

Most people don’t experience a singular event that defines their life. Claude did. It can be dated quite precisely: the night of 20th-21st January 1944. Half a century later to the day he, my mother, and I stood on a wind-swept Southwick beach looking out to sea and to my surprise – I’d remembered the date but his memory was notoriously bad – he remarked on the anniversary. This was the day when, at 19, he was transformed from an RAF rear-gunner in 102 Squadron – a dangerous position in a dangerous occupation in unglamorous Bomber Command – into a prisoner of war of the Nazis, itself a perilous situation. Perilous both at first, when the German Home Guard had to protect him from the anger of blitz-crazed Berliners on a U-Bahn platform, and at its chaotic end a year and a half later, when the Nazis melted away like feral ghosts, to leave an anarchic zone. Confused RAF fighters straffed columns of forced-marched POWs. A German farmer sheltered two escaped POWs – Claude and his friend Johnny – to hand-signal his way through the night, somehow telling the two hungry Englishmen that they never wanted Hitler. Claude escaped to Brussels, in time for parties and dancing in the street, and returned to Britain, via a debriefing to establish his identity, to a dull civilian life in Atlee’s far-from utopian Welfare Britain, whose founding Claude nevertheless supported. Claude remembered falling asleep on the upper deck of a bus, due to extended malnutrition, passengers unable to comprehend his condition.

No wonder he signed up again! For a shadowy few years, at one point romantically supping expensive wines that hoteliers had buried from the Nazis in Marseilles; at another, fighting communist insurgents in tropical Malaya in a forgotten campaign, during which his plane crashed and he broke his wrist. Until he finally left the Air Force, vowing never to fly again (one of the reasons I never flew in a plane until I was forty!). He’d already met Joan, my mother, apparently at a New Year’s dance in Brighton, rescued her from a drunken sailor, if we are to believe the stories, and married her in 1950. They look like film stars in the wedding photographs – some of you were there.

This was the beginning of his domestic life, his daily journeys – by bike and train and later by car – from Southwick to Newhaven Harbour. As a child I accompanied him when he worked Sunday overtime, driving along the seafront in the Triumph Mayflower (KOR 677), ‘Telstar’ playing on the car radio. The job was humdrum but with the occasional mystique that accrues to trains and ships, even cross-channel ferries. The small loving miracles of everyday life enveloped him. Southwick with its magnificent cricket club – three Saturday teams and a Sunday team! – suited him very well. He became a life member after services to it and of the adjacent social club he helped administer in his spare time. These and the Golf Club have sent fond messages in the last few days.

But the moment of that night in January 1944 played like an old 78, caught in a groove. He baled out at 20,000 feet, falling onto a burning city, ‘came down in complete darkness, knocked unconscious – woke up completely confused, imprisoned by Germans in cell overnight’, as Claude himself wrote around 2005 in some notes (never sent) for an aviation historian. You see, he’d baled out into World History, and he knew it. His account doesn’t mention trapping his foot in the cramped cockpit as he reversed it, the plane beginning to plunge, or the fact that he would repeat this trauma nightly in his single recurring dream, for at least 62 years, until dementia finally erased it. In the nursing home in recent years I expected him to revert to these war memories (as he started to do in health only in the 1970s when he located other survivors of that night, including the skipper, Reg.) But he didn’t: he sailed somewhere through the eternal calms of his domestic life of the early 1960s: more The Shadows than Glenn Miller, to put it in terms of his favourite musics.

Also in that account of his flying (10 ops) he related a ‘hair-raising incident’. Claude’s words again: ‘Coming home from an attack we were badly shot up and the skipper advised us to put our chutes on. We were standing by to bale out with the North Sea in front. One of our crew members had accidentally got hooked up with the chute lines and pulled the rip-chord…. He was holding the parachute in his arms. I often see his face (he corrected the word to ‘expression’). It must have been frighten….’ Here the fragment cuts off. Another take on the story ends: ‘He was a brave man.’ Claude told me he never saw the man again after this display of LMF (Lack of Moral Fibre).

Another part of the trauma was imprisonment in Stalag Luft III, a mobile life of forced marches into the chill of Poland and back into Germany. He taught himself and others accountancy (useful in Newhaven), including Johnny, later his best man. I don’t know a lot about this time. They lived on rotten potato peelings. One result of this was that Claude would never eat meat with gristle in, even fish with bones in! He always dressed well, perhaps in reaction to these months. Another result was more incongruous, even inexplicable: the rousing chorus of ‘Raus Raus!’ with which he would wake me in the morning as a child, in imitation of his German guards!

My childhood memories of my father are often images of the Mayflower-Telstar kind: his assembly of Airfix models of World War 2 aircraft with minute precision which I would clumsily hand-glide to land on the airstrip circled by train-track he’d screwed to a large sheet of hardboard; Claude reconstituting parts of ancient valve radios (another skill learnt in the RAF) to make new sets for me to listen to short wave stations from around the globe; the patio at Oakapple Road covered with cricket pads, whitewashed by him and drying, a mark of his captaincy; cricket coach trips to bluebell woods and pavilions with wooden boards, me rattling out bus tickets to the cricketer-passengers on the return journey. All of these tableaux of desirable innocence were played out under the shadow of that one event – though perhaps the rest of us couldn’t see it most of the time.

Although an essentially irascible man to the end, to me he was nothing less than gentle, tender even – though he was always disappointed at my reluctance, my refusal, to participate in any form of sport, my complete failure to follow his exemplary and sometimes excellent record as a lifelong sportsman: as boxer or footballer (before my time); as cricketer, golfer, snooker-player (in my memory). No tennis (he called it ‘an officer’s game’); no rugby (he never mentioned it). But it’s only now that I perceive his protectiveness towards me, though I’d always perceived (and resisted) his largesse, his generosity, again derived from wartime deprivation, I’m sure. Despite being an only child, I don’t think I was spoilt!

He was proud of my academic career, but my development as a writer might have been thought surprising to Claude. Strangely I never wrote that book on football he desperately suggested to me (though I am now telling his life story here, which he also slyly proposed). He was an avid but un-systematic reader – he’d tackle one of my childhood Biggles books as well as a block of Henry James – and only a few years ago he discussed with me DH Lawrence’s Sons and Lovers with an intensity worthy of a good undergraduate. He had a small library of books on wartime aviation and POW matters. He instinctively understood my 1986 poem Schräge Musik about World War 2 bombing and the world of dance band music (which was in the family), round about the first time he delightedly met his grand son Stephen. He spotted all the allusions despite the cut-up method of the text; and he gave me a couple of details which I smuggled into later printings of the poem. He also shyly confessed to having written a poem himself, on a troop ship during a particularly nasty storm in the Bay of Biscay in 1947. He could remember a verse and I wrote it down. I possess it somewhere.

Recent years saw his resilient endurance of what is perhaps misleadingly called a ‘fight’ against skin cancer. After his working life at Newhaven Harbour, capped by a rather clever move to an elevated post in his final three years, this clouded his retirement. Nevertheless, he enjoyed his vigorous golf and-snooker-playing and thorough home-improving years with my mother. And we shouldn’t forget the garden, which was maintained like that of a stately home. Given the extent of the surgery he underwent it is remarkable to think that he survived beyond his 89th birthday. He was a strong man. Antagonistic to doctors, he was nevertheless a grateful man. Like his comrade of years before, he was a brave man. Throughout this time, his self-sacrificial care for my mother stemmed from the same generosity I mentioned earlier. In short, he was a good man.

From RAF Records of bombing raids (complete with mis-spelling of my father's name):

'Standing By', my poem in his memory is now published with another poem as The Drop. See here.

Posted by Robert Sheppard at 12:33 pm