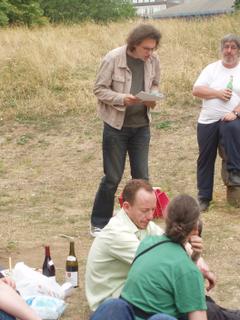 Jeff Hilson reading at The Poetry Buzz
From Bird Bird

Must work without the wren their shiny coats there their fat small hands. They once were kind. Once they all faced the same way and sang. Once. Doubtful bird you have seen. The word that the wren said: “shoes!” A wren doesn’t cost any money. There! There! Dipping in Northern Europe. The story of its longer wings from England. Must buy ham. This will not be liked much either. Under the tractor I shoved it in her hard but each take was spoiled by the king wren. Tit parties in winter, small loose parties erupting westwards sometimes high up. Golden England. Down and down Newington Butts caught moths with the smaller birds, again wren-like. Wren as host, magpie as host, above whose clashing hands, business-like, now a wren costs a few pence.

Why I am not a snipe. I went to Scotland, needles too, as it was so so cold. Say “falls.” Dear & I hope it was to Scotland I went to not & to Cornwall as they are quite a few apart. Bill hooked sorry about that & left. Bill turned down & left. Bill shorter. Bill somewhat shorter. A much shorter bill. Short straight bill turned up & left, jangling of a bunch of keys, bell-like, which was then all over, brief. And I can’t stop song, no, no, songs we can’t agree who even scored. No white no white (which she said she did, right through) which makes this the last story. Dear as well, when I go down sorry. And his little wife climbed, beautiful about these men.

Easily told around the houses and they went this way looking like quick and brown, the same as before only going. Going to a roding valley there to feel for the wrong bee. A fish carried forward in the hand, to soothe. There in time to motley. The head to lead to the circle. They fell down rhyming, lightly come, like a man at things in a wood. A poetry ring recent and wet. The point is outside and in, though scarcely so. Like scarcely weeping, or scarcely so. From town to form, from place to position. Or grazing on each other they work the suburb to a thin.

Cinch him up that crake. Dragging his sleeves in the river he dropped all his spit there. “This mire is tiny like the rose family. I am park’d out of mine ridges by too much spelling. I was ever made up. I will be lately round and round you with mine action, unfrozen.” B-r-a-i-r-d. Braird. What it walks on at night, false false thing which is why it must first be driven. The collected works of crakes begins on the greasy border. Page 1 (unseen), page 2, page 3 and so on unseen and unseen until the page where it says gobak gobak which it never says like it never says cark cark or is like any small dog. Then seen by all the container drivers who spread out for a few royal pence. How is all the dry birds stayed on your hands, their slim forms?

Used to stitch back her boat of no record and she got the French inches late. When we gave up reading for scraping. Her own precious boat now dansand mery but she never rode it in nowhere. No legs so threw her some after. Now she come before the mackerel. She-feathered she says to track the fall-laws so what you can pick up. A single word (it is present-day), not curves, knots, the end. My rare men, soldiers, sailors, the king one. The lean and poor. Her boring opposites, she needs a definitely operator and some new rounds, some new names, not ring not cortina.

They all come in backward of the oak. So. Here is leafless Ray, have a knife with him, good luck Ray, turn your coins. Out of the black to hear him first call it money. His tears that was named after him, sit and see, I spied it. And the birds left off the green they will have to. That one fair rides away as the cause of summer. Get over it. Now they are gathered as bees in the hedge. Birds it seems are then crossing. A third is in the field. We call him the third bird. You could put a quid on him too. So. Leafless Ray he passed over his note free and are your eyes are blue.

& could annexe tarn st but fuck go so careful – 1 owl choir near the house this way. Saw that owl again, not to walk with, not in the south. We lie down in the yellow-flowered purslane, tarsus and primary, wingbar and nape. We right click and display our grammar. We the last avant-garde or whatever. The one about November November and how it’s June and I lost my horseshoe or gained it or whatever. Gained it, light enough for what I have to do with all these filters and starters, so lyric-like in the ditch bank, in the oil pit, in the forest in, though less so less so often less so.

It’s May and I’m found out turned into a pie! Fallen from a pipe into a pie! It’s as easy as pieces when you are unimportant, annoying to be fallen off again into the pink. Unstressed me, I am something nonne! Woke too to a tipsy-dance, feathers on in the wall, of the wall. Is difficult to poem today, to force the figure of the berry in the late bee hole, so worn in the movement, so worn in the tipsy-dance. Your dancing why your askin? Why this is all a right error! Mine starte they say is mine ende (but that’s a sidelong, a half-a-face, on the ‘o’ – rare-ripe he is shaped and heavy into it like rolling over the brake path)

O little fan I wouldn’t start but start. “Hoo hoo” to the owl (thou, o owl). His reply: “You are half-a-fish, head and back, and mute. I am a dish here. Only my silver threads is coming on. They do so. I am afraid of the bones of fish.” His reply: “O Jones.” His reply: “That I run with a shell through the streets.” His reply: “weep weep.” His reply: “Look how I am the same as pussy.” His reply: “This went on for hours, and on the wing too.” Broken he is see a round talker, all feint, drawing you off. Give him the shakes, ask him about the leads, about there, the shakes. He never heard our conference.


Posted by Robert Sheppard at 7:25 pm