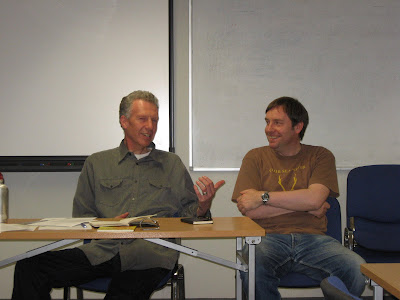 Andrew Taylor spoke of how a poetics is never finished just because a document of poetics is complete, but continues to evolve, in his case developing his sense of a topologiocally-inscribed 'Poetics of Absence' (a formal presentation of which is contained in Rupert Loydell's excellent Salt poetics anthology Troubles Swapped for Something Fresh, which we were also launching).
Cliff Yates outlined his development from a poet who writes about experiences to a poet who allowed the writing of the poem, in the act of writing, to become the experience. (Again, see his contribution to the Salt anthology.) More recent pieces explore a translatorese-ish estrangement of language, refracted through broken forms such as pseudo-pantoums.

Both are founder members of the group, which first met on 21st October 1999.

Details of the next two talks evenings may be found here.

Read Cliff's review of The Poetry of Saying by Robert Sheppard here.

Posted by Robert Sheppard at 11:18 am