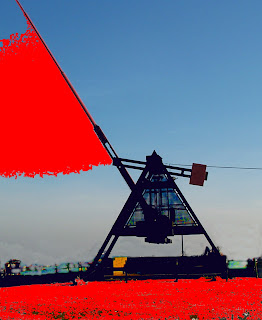 I’d like to show three of my sonnets from Warrant Error, from across the sequences, but having in common an intertext in Shelley’s marvellous meditation upon political terror and time, ‘Ozymandias’:

I met a traveller from an antique land
Who said: "Two vast and trunkless legs of stone
Stand in the desert. Near them on the sand,
Half sunk, a shattered visage lies, whose frown
And wrinkled lip and sneer of cold command
Tell that its sculptor well those passions read
Which yet survive, stamped on these lifeless things,
The hand that mocked them and the heart that fed.
And on the pedestal these words appear:
`My name is Ozymandias, King of Kings:
Look on my works, ye mighty, and despair!'
Nothing beside remains. Round the decay
Of that colossal wreck, boundless and bare,
The lone and level sands stretch far away".

Shelley’s sonnet might be thought innovative in that it strains against the restraining order of the form, while making a new form with its insistent improvisatory utterances (we know it was written quickly, against the clock in fact). My forms attempt to make new forms and meanings through allusions and borrowings (sometimes of resonant single words) from the poems, but also have their own foci. The intense logopoeia of the second derives from the puns I collected and from the quotations, not only from Shelley but from Arendt and Deleuze (at least) as well. The third poem refers to the metronome in the image above (a photograph taken and manipulated by Patricia Farrell).

in on targets..’ struggling with his war
poem the dark god of his sonnets
freeze framed death tools downed

The red metronome on Letná hill
sways like a lucky drunkard
on its pedestal above the spires
a restless reminder of rust and wreck.
Or an antique windscreen wiper

describing its arc
upon a plane of smear and rain-wash
heroic in a monochrome movie, tinted red

With each wipe across the screen
the determined visage of the driver clears.
It’s Josef Stalin the giant blocks with his pocks
long blown to shatters but he’s still there

waving yes and no
to anyone who can see him

Posted by Robert Sheppard at 9:18 am