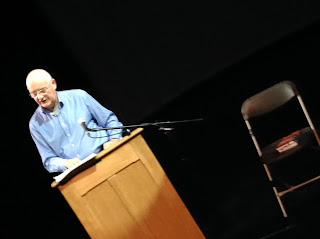 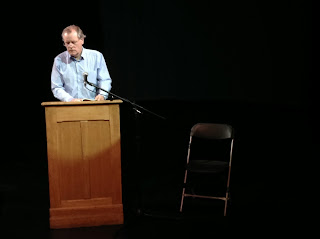 On Tuesday Allen Fisher and I read at Edge Hill University. Photos above by Paige Mitchell. I was launching A Translated Man and Allen was reading a range of work. The week before I delivered a double lecture on Allen’s work to a joint open meeting of the Poetry and Poetics Research Group at Edge Hill and the MA in Creative Writing. The next day I decided to write a brief paragraph on the organisational principles of  Allen’s two big projects, before turning to the main thrust of a chapter I’m writing on Bill Griffiths and Allen Fisher for my book on form. It grew so long I knew I would need to write it in full before I had any chance of abbreviating it. Obviously this introduction goes on too long for its intended context. Here it is in full. Now I can get back to writing about Fisher’s Proposals.

Although he has, as we shall see, worked at the level of the book as form, most characteristically Allen Fisher is concerned with the formal delineation of large-scale structural events, devising forms that are elastic enough to register local decisions regarding content (and its own forms) as they develop across expansive projects. This is noticeably true of his two long projects Place and Gravity as a Consequence of Shape and it is worth considering how these were conceived at the level of overall structure.
Both were time-based. A ‘map …of approaches’ to Place, dated 1971, indicates 1980 as the year of its abandonment or completion. (Fisher 1980: 92-4; 99-101) Gravity (1982-2005) seems to have overshot the Millennium (I think that was to be its attempted limit) somewhat. Both consisted of a set number of parts. Place chiefly consists of five books of 100 pages each. The collected version of the text, Place of 2005, is almost an aberration.  Only one ‘approach’ in the ‘map’ is ‘considered void’, that is a chronological reading of these published books in order, although this is unavoidably what the 414 page collected volume offers. (Fisher 1980: 99) Working in the same small press milieu as Griffiths it seems likely that publication in smaller pamphlets (the favoured small press mode of the 1970s and 1980s) was a pragmatic constraint and Fisher may have been resigned to never expecting to see a collected edition (and made a formal virtue of this circumstance, as we shall see). The 750 pages of Gravity similarly appeared in fasicles, pamphlets and books before being collected, not in one volume, but in three: Gravity, 281 pages (2004), Entanglement, 287 pages (2004) and Leans, with 183 pages (2007). The formal parameters were less to do with books than was Place: the titles of the separate poems – there are 163 in the trilogy – derive from an alphabetical list of dances, ‘Accretion’ through to ‘Zip’, although the 163 poems taking some of these 188 titles do not appear in alphabetical order (and obviously not all titles are used). Partly this is to do with the fact that there is a second ordering system, more difficult to outline. A note to Gravity announces that some (again) of the poems of the project ‘were made directly or indirectly relative to the first fifteen pages’ of the notebook of William Blake; (Fisher 2004a: 271) the phrase ‘directly or indirectly’ works to destabilise assessment of its effects. Together the two systems as structural homologies are deliberately complex and unpredictable.[1]
When it comes to considering the role of the reader in forming the texts of the two projects, again differences emerge. One result of the appearance of Place in contributory volumes may have been the half-pragmatic half-poetics model of reading. Fisher’s maintained that in the act of reading any passage the reader is positioned as ‘the loci of a point on a moving sphere’ with relation to the entire project, in the map of approaches. (Fisher 1980: 101). This means that any reader can join (and leave) the project at any point. (This is presumably why a sequential progress through the text is disapproved of.) One of the most cogent descriptions of Place is contained in Peter Barry’s term ‘content-specific’, which helps us to see that the different parts of the project, whether they be the open field notations of the first book of Place, or the oracular dramatic narratives of Unpolished Mirrors, are reactions to, readings of, sources listed in the ‘resources’ to each book. Place is therefore less a text about locality than and more a conceptual and intertextual project. However notational it appears, the text of a given passage is referring off-stage, as it were, to facts and theories contained in the notes. The texts point outwards and back again, because we read the texts in the light of the external information, re-read the information in the light of the experience of the poem, and possibly return to read the poem again. Fisher at one point describes this process quite explicitly:

I read Pound who calls me to read Dante
who gives me better sight to read Duncan
who suggests I read Pound  (Fisher 2005: 46)

This is not simply the confession of an autodidact but the description of ‘content-specific’ reading, here figured with a circularity that is analogous to the operations of the lost rivers of London (the literature pertaining to which fills the ‘resources’): ‘the Thames it fed flood it/ and the more it flooded the more it cycled’. (Fisher 2005: 46) While I do not think every part of the project operates in this way (for the opening lines of this page, ‘I retraced my steps/ took the Ditch at Nine Elms’, sounds genuinely notational ) (Fisher 2005: 46) it is generally true that, as Barry says, ‘the text is … readerly in two senses: firstly, it is about reading, and secondly, it demands the reader’s sustained participatory engagement with its materials as well as with “the words on the page”.’ (Barry 1993: 199-200)
While the poems of Gravity as a Consequence of Shape contain ‘resources’, creative linkage, the operations of an accelerated collage, makes the ‘participatory engagement’ of the reader even more important, one made explicit in the poetics text written towards the beginning of the second project, Necessary Business. He generalises his own reading experience:
As a reader, I am involved in anticipation and retrospection, the virtual dimension brings into play my own activities and expectations, and the text’s openings and evocations into the complex of my memory and that memory presented as text. The patterns of connectedness bringing into this actualising my inventive memory with my own historical limitations of reading. (Fisher 1985: 213)

He wants to ‘encourage readers to find words mean as much as they can’ (236-7), by presenting a formally rich collage of particles, rather than presenting factual information. The reader’s powers of forming, their propensity towards conjoining the disjointed text: ‘The new pertinent poetry incites, it provides patterns of connectedness through its aesthetic function which create the process of production in me,’ (Fisher 1985: 165).[2] It is brilliantly present at certain points as here, a stanza from ‘Black Bottom’:

Her condition is diagnosed as leans
Record of her energy playback
is censored
marked ‘Unprofitable’
derived from a loss of orientation.
Her periodic pain moves out of cycle
A light-carried issue in a reposed,
proportional space
pierces snow. The Painter calls this Song.
She crosses the High Road
singing, so sure of her lover’s beauty
she is incapable of resentment.
These rational delights
bring her to carefully tidy the disorder
before the government search her apartment. (Fisher 2004a: 70)

This was Fisher’s default mode throughout the writing of Gravity as a Consequence of Shape. Teasing with transformations (periodic for period, for example), juxtaposing the lexes of medicine, capitalism, government coercion, and scientific language (which is used suggestively rather than accurately). Fragmentation, as in the line-breaks and irregular capitalised words and punctuation marks, works formally with narrativity and voice to construct a textual world replete with energetic utopian potential (those lines about love and resentment, for example) while threatened with censorship, and tinged with absurdity. ‘Loss of orientation’ is a good way to describe the way the creative linkage disjoins but conjoins at the same time. The reader feels these lines belong together but suspects the juxtapositions result from the yoking together of passages lifted from sources, or even ‘resources’, but they are not present enough for us to follow them outside the text, as Barry supposes of Place, but we have precisely to make these words mean as much as they can, but no more. The disorder cannot be as carefully tidied as a bedroom.

Read all the links to my work The Meaning of Form here.

[1] My episode ‘Allen Fisher’s Apocalypse Then: Between Place and Gravity: Technique and Technology’ in When Bad Times Made for Good Poetry (Exeter: Shearsman 2011) outlines these homologies in further detail.

[2] Fisher makes reference here to Mukarovsky’s aesthetic function in this piece, about which I write in detail in Chapter 8, ‘Creative Linkage’ in my The Poetry of Saying (Liverpool: Liverpool University Press, 2005): 198-9. The aesthetic function is an openly formal entity: ‘Because it lacks unequivocal “content”, its aesthetic function becomes transparent and acts with the other functions.’ (Fisher 1985: 236)