Here is the last of the current batch of de-selected poems from History or Sleep, my Selected Poems. 'Byron James is Okay' comes from the end of Warrant Error. I talk about it in my interview in The Wolf (read here; the interview is also de-selected from the book, similarly because of space). 'It's grim stuff, the blackest impaction of societal depression, with flashes on utopian parkways desperately trying to compensate,' I say. Then I recall the day I wrote this poem: 'I remember first reading Nate Dorward’s review of Tin Pan Arcadia and he quotes that line from 1984 about a foot stamping on a face forever, and says that’s the effect of reading my book. I put The Gig down and switched on the radio. It was July 7th 2005 [i.e., ten years ago today.] Bombs had gone off all over London, it seemed, at the time. I made notes. I wrote "Byron James Is Okay" ... with that criticism ringing in my ears and thinking, yes, this is the world, but also grasping for more positive human values (not that they are not there in Twentieth Century Blues, I hope. At least the blues ring out true.)' What I don't say in the interview is the more interesting human story of being later contacted by Byron James, who had sent the message that appeared on Sky News and that I had quoted in my notes and subsequent poem's title, who asked to see the rest of the poem (Paul A. Green had published a portion of it, from his account of the 60th birthday bash for Allen Fisher, which passed by the site of 7/7, at which the poem was first read, hence its dedication. See that celebration here too, and here).

Text phone no-name news-clips
Shatter the showered details. If
Was whened in the burnished air, a tin-
Can chrysalis formerly a double-decker bus.


Only the city has a name. It’s calm.
Fluttery police tapes. Shivering faces
Covered with soot. Lacerations of sand-
Grain particles. Who walked over bodies; others,


Dismembered, still in their seats. Anon-
Ymous heroes beside pockmarked walls patch up
No bodies ‘burning in fear’ – above shaky sounds


Of movement under ground. Police fumble with a
Geodesic tent funnelled to the mouth of the Tube.
They call the unnamed names back to the world.


Warrant Error may be purchased here, from Shearsman Books. A few more of its poems appear here to 'welcome' the readacted report on the 'War on Terror'. 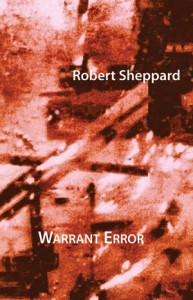 Posted by Robert Sheppard at 4:00 am