Yet Another New Book: Unfinish published by Veer: only £5.

Buy it here and see more of the text.
It contains 8 prose pieces:

‘Theses’, eight quotations to orient the book and introduce the theme of ‘human unfinish’ which appers also in Warrant Error and Berlin Bursts. 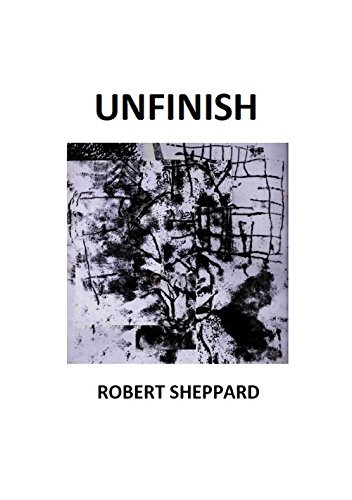 ‘Bad Poems for Bad People!’, is a response to parts of Sean Bonney’s keynote at the Conversify Conference, Edinburgh, 9-11th September 2011 (though not to the exemplary readings of Rimbaud therein, but in anticipation of the publication of Happiness, and certainly before the completion of his PhD on Amiri Baraka, which I had the pleasure to read in 2012). It was first performed as the finale to my Berlin Bursts reading at the Bluecoat’s Chapter & Verse literature festival, Liverpool, on 16th October 2011. It was first published in Intercapillary Space at intercapillaryspace. blogspot.co.uk/2012/07/robert-sheppard-bad-poems-for-bad-people.html in 2012. It’s also twinned with the paper I wrote and delivered at the conference, ‘Notes on Form, Forms and Forming and the Antagonisms of Reality in Criticism, Poetics and Poetry’, which may be read on Pages blogzine, at robertsheppard.blogspot.co.uk /2014/04/robert-sheppard-form-forms-and-forming.html.

‘Venus and Adonis’ is a compressed prose piece.

‘In Unadopted Space’ is a poem-essay on the nature of space (a theme I need to return to at some time).

‘Comrade Ivan Ivanovich’s Book of Solid Kremlins and Melting Cromlechs’ is a history of Russia since the Revolution, somewhat compressed.

‘Interlude’ is an interlude.

‘Portrait and Portals’ was published, with images by Patricia Farrell, on the online part of the anthology The Dark Would, edited by Phil Davenport, Manchester: Apple Pie Editions, 2013. Part of this has been adopted as the cover image, see above. For The Dark Would see here.

‘Excitation for Jo Blowers’ was first performed, in a performance text version, as a work-in-progress, at the Friends of cris cheek evening at the Bluecoat, Liverpool, 25th June 2013, by Jo Blowers and Mary Prestidge (dance), and Robert Sheppard and Patricia Farrell (voice). More on work with Jo here and here.

Posted by Robert Sheppard at 11:11 am