Robert Sheppard: Response to Veronica Forrest-Thomson's Poetic Artifice back in print at last 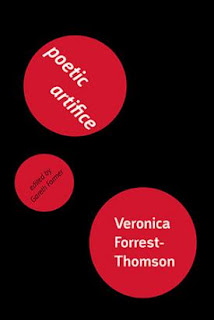 A major influence on my early turn to form and my recent return to form, expressed in my volume The Meaning of Form, (see here) and which is revisited in detail in its current Chapter Two, is an old one: Veronica Forrest-Thomson’s Poetic Artifice (1978). It is a sheer delight to see that Gareth Farmer’s new edition of the book is out from Shearsman. (See here.)I first encountered the book in 1979 at a crucial time in my PhD studies. I regret most deeply that at an administrative stage it was decided that her methodology was ‘not strong enough’ to be used in it, by some committee or other. (They meant ‘unknown’ and wanted me to read Bloom instead.) The book had been reviewed by my tutor Helen McNeil in The New Statesman. However the lesson remained and it is indeed a book that changed my (poetry) life. (And it changed others: like Alison Mark, to whom I introduced the work).

Forrest-Thomson valorises what she calls the non-meaningful devices of poetry; meaning can be read only as torqued by artifice in defiance of a method of reading called ‘naturalisation,’ which she defines as the ‘attempt to reduce the strangeness of poetic language and poetic organisation by making it intelligible, by translating it into a statement about the non-verbal external world, by making the Artifice appear natural’. Our best reading occurs when this process is resisted almost successfully and artifice shines most artificially.

This axiomatic sense that an unexamined form is not worth reading naturally opposes instrumental readings that temper textuality with social naturalisations. Writing about what is sometimes called ‘linguistically innovative’ poetry that works by defamiliarisation, undecidability or through structural and linguistic complexity, means that I take form to be unavoidable as an issue, though it seems not to be in other areas of literary (or cultural) studies, though even to say so should seem odd. My critical and poetic commitment to the discourse of writerly poetics also necessarily focuses upon form.

Even the most casual reader of her book will glean the central notion that Bad Naturalisation (to ‘set aside’ ‘the non-meaningful devices’ of poetry ‘in an unseemly rush from word to world’) is a betrayal of poetry’s specificity, since it involves the ‘attempt to reduce the strangeness of poetic language and poetic organisation by making it intelligible, by translating it into a statement about the non-verbal world, by making the Artifice appear natural’.  This is the process many exegetes of a poem seem content with, to talk away the poetry in prose paraphrase (and many of us are ‘guilty’ of this) while we pay lip service to the autonomy of the literary work. What Forrest-Thomson demands is a system of delaying this (inevitable) process in order that a poem’s formal features may be fully registered as an integral part of the poem’s total effect, not as a mere vehicle of, or supplement to, meaning.

A process of ‘external expansion’ of the words of the text into the world and then an ‘external limitation’ back into it characterises bad naturalisation. Meaning is sought beyond the poem (perhaps in social and literary contexts) and dragged back into it. ‘The attempt to relate the poem to the external world limits our attention to those formal features which can be made to contribute to this extended meaning.’  A bad reading, for example, will relate a free verse poem to the fractured state of society it is assumed to ‘reflect’, while other aspects, say its harmonious alliteration, which contradict the poem’s supposed message, are conveniently ignored. On the other hand, ‘Good naturalisation dwells on the non-meaningful levels of poetic language, such as phonetic and prosodic patterning and spatial organisation, and tries to state their relationship to other levels of organisation rather than set them aside in an attempt to produce a statement about the world.’  More precisely good naturalisation ‘dwells at length’ (delaying the forces of naturalisation for as long as possible) ‘on the play of formal features and structure of relations internal to a poem’: for example, on ‘all the rhythmic, phonetic, verbal and logical devices which make poetry different from prose’.

Naturalisation – both good and bad – constructs intelligibility by reaching out to the non-verbal, and is inevitable, we must remember, in any reading.

Her work is fundamental to my The Poetry of Saying. (See here.) In The Meaning of Form and in ‘Linguistically Wounded: The Poetical Scholarship of Veronica Forrest-Thomson’ in ed. Turley, Richard Margraf, The Writer in the Academy: Creative Interfrictions, Essays and Studies 2011. Cambridge: D.S. Brewer, for the English Association, I take issue with some of her methodology (I don’t believe poetic artifice is non-meaningful, and it’s possible neither did VFT (as the secret society that has read this work hitherto often calls her) by the end of her short – far too short – life. But this is not the place to extend those critiques.

For a creative response to her work as a theorist and poet, read here.

Posted by Robert Sheppard at 9:13 am