I have been working on the pages for a poetry and poetics anthology I am editing with James Byrne, called Atlantic Drift, that deal with 'poetics', that obsession of mine, about which I have written here in my piece The Necessity of Poetics and, once more, here, in my Inaugural Lecture (and there are other non-online places too; see links at the foot of this post). I thought I'd share the bare bones of this piece in the hope that it clarifies the issue rather than muddies the water.


Poetics at its simplest is the self-communing of creative artists, in this case poets, about what they do, what they make, and why they do it, and carry on doing it. Poetics (like the word poetry) derives from the Greek, poesis, ‘to make’. It is often misread and I would like to suggest approaches to it.

Poetics is essentially a speculative, writerly discourse, one which might have a variety of foci for its author: on the creative process in general or on specific works as they are written (or are about to be written). It may take on aspects of a manifesto or it may be a more mercurial affair, teasing rather than programmatic, possibly teasing for the writers themselves. Where it approaches the manifesto – the ‘Projective Verse’ essay of Charles Olson, for example – it may be proposing formal innovations for a creative community, either existing or hoped-for, but we are just as likely to find personal thumbnail sketches and thought experiments of an individual poet (who may even, ultimately, abandon the course of action the poetics seems to be suggesting).
Jerome Rothenberg, defines the urgency and scope of poetics well, in introducing a book-length collection of his own meditations on practice, and he relates it directly to the way he sees the world:

But the world we share, & our interplay with it, calls again & again for discourse: in the case of Poets, the setting forth of a poetics. I have found myself involved with that also, at first tentatively & then, once into it, discovering ways suited to my own temperament & to the sense I have … that the discourse, like the poetry, must in all events resist rigidity & closure. (Rothenberg, 1981: 3)

He also states his more general ambitions for poetics: ‘At the same time – make no mistake about it – I’ve attempted, like other poets so engaged, to create a new & coherent poetics for our time.’ (Rothenberg, 1981: 3) This rather neatly expresses the range of the discourse, the tentative nature of its utterances and yet the often communal, even global, ambition it has; Rothenberg is ‘like other poets’ but the writing is ‘for our time’, and, therefore, for other poets (and readers of poetry). Rothenberg’s sense that poetics might encompass the same flexibility and openness encountered in his poetry itself leads us to imagine the formal possibilities of poetics as analogues of the poetry itself. Its own forms are often exploratory and worthy of contemplation; it is not a transparent discourse, a secondary ‘commentary’. In some cases it is in the poems themselves. (See my precis of World Poetics in 4 posts, links below.)
As these examples alone suggest, the discourse appears in many forms, and in many places: in letters and treatises, in private journals and on public platforms, in interviews and introductions, in casual asides and even in well-wrought literary criticism, though the simple ‘statement’, often aphoristically concise, may be its most consistent form. (To my mind, actual manifestoes overstep the mark and damage the speculative nature of the discourse and replace it with the ‘must do’ of literary orthodoxies. The craft-oriented ‘how to’ of creative writing manuals is another danger to its speculative freedom.)  Some examples are even anti-poetics in their reserve in the face of possible self-commentary, but every piece I know demonstrates the axiom expressed forthrightly by Charles Bernstein, ‘Poetics don’t explain; they redress and address.’ (Bernstein 1992: 160)
Given this range, I believe poetics, which is too often read as a short-cut way into the poetry it has provoked into being, as a readerly tool, should be studied as a unique and curious writerly discourse in its own right. However, restricting ourselves to our present collection and its arrangement, I should like to suggest the best way in which its poetics might be encountered, what mode of ‘dialogue’ I am proposing between poetry and poetics. Like Bernstein, I do not believe these pieces ‘explain’ the poems that they accompany. (In any case, while poets’ own descriptions of their work are interesting, they may not be accurate; poetics, oddly, may function as a masking process, in the service of further innovation, stimulating creativity by not explaining what has been, or what might be, written.) They ‘address’ questions of poesis, matters of content sometimes (as in feminist poetics or eco-poetics), questions of form nearly always (and there is less ‘redress’ here, fewer suggestions that the poets are putting the record straight on the histories of poetic antagonisms, the so-called Poetry Wars). If for a writer, as Bernstein says, ‘One of the pleasures of poetics is to try on a paradigm … and see where it leads you,’ then a reciprocal pleasure for the reader might be to entertain creative paradigms and speculate how they operate as ideas about poetry in general, rather than searching for clues to interpretation of the adjacent particular poems. (Bernstein 1992: 161)
If for the poets, their poetics denotes a ‘permission to continue’, then permitted continuation for a reader might suggest fruitful avenues of aesthetic encounter and repeated creative reading. (DuPlessis 1990: 156) If that reader of poetics is also a poet then it exists as a provocation to explorative creativity, one guided by the poet’s own developing poetics. Indeed, such examples (again see the formal range in World Poetics here) suggest manners and forms which might be adopted or adapted to articulate it. Again, check out the formal range of the World Poetics summarised in the four posts below.


Links to Works on Poetics

Below are four very condensed accounts of poetics through the ages:


And my Inaugural Lecture here: 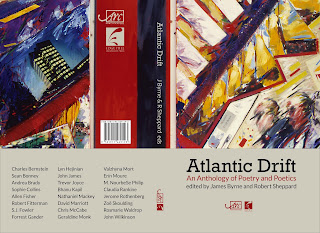