Robert Sheppard: A Quick Shag for Alan Halsey' in ... 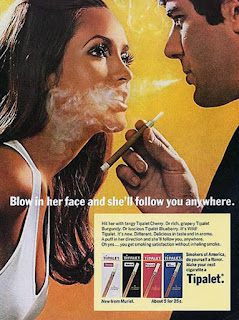 I am pleased to say I've a poem in Fugue & Subterfuge : A Festschrift for Alan Halsey. Edited by Nigel Wood, it contains poems and essays and images for Alan - and looks a good read (I've only dipped in so far).

Email Nigel for details at: goatsheadpress@gmail.com


My contribution is a poem, 'A Quick Shag for Alan Halsey', which uses Google translate (very unsystematically) to work on Aretino's first sonnet. I had planned to do some versions of some of them in my on-going sonnet series, BUT Alan got there first. See his 'An Internet Sieve for Aretino's Positions' in his Rampant Inertia, available from Shearsman. But that at least left Aretino open for my homage to Alan. Readers may be alarmed to find Aretino saying, in my poem, with no textual authority whatsoever, 'Blow in her face and she'll follow you anywhere', a highly charged and sexist remark. The source is a 1960s cigarette advertisement. Above.
Posted by Robert Sheppard at 8:00 am