Robert Sheppard: Poem in Face Down in the Book of Revelations: for Peter Hughes at 60 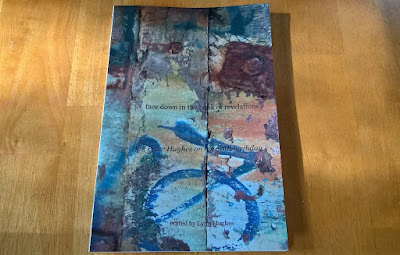 Peter Hughes at 60 is celebrated in this anthology edited by Lynn Hughes. I don't know when he found out about the book, but I hope it was as much a surprise as An Educated Desire was for me last year. (See here.). And here is an account of the last time I saw Peter and Lynn at Leicester (contributors Nancy Gaffield, Simon Perril, Andrew Taylor and Alan Baker were all there too).

I have read the poems in it (not the prose by Lou Rowan yet!) and I particularly enjoyed poems especially written to or for Peter, such as those by Alan Baker, Nancy Gaffield, Anthony Mellors, Kelvin Corcoran, Emily Critchley, Johns Hall and James, and the Simons Perril and Smith.

I'm pleased to say I have a poem to (not for) Peter in the book, one that tries in its fourteen lines (it's another of the poems from It's Nothing (see here)) to get to the essence of Peter's writing, not just the Petrarch translations (which I write about here and here), but all of his work:

Fortuity I endorse, the strong noun Peter Riley uses
of your patient projects and restless forms.
But my dictionary gives it a wide berth. It offers

‘fortuitism’ instead, another ism we don’t need.

Of course, Peter Riley is represented here, as are many others I've not mentioned, ranging alphabetically from Tim Atkins at the beginning to Nigel Wheale at the end. It's great company to be in; the book features many of our best poets, dressed up for a birthday party. It's also the 100th book from Oystercatcher, Peter's enterprising press, though it is also credited as a 'Sea-pie Production' (which must be Lynn's moniker). See here. I suspect it'll be available soon.

Until then: Happy Birthday Peter! Well done Lynn!
Posted by Robert Sheppard at 8:00 am