Chris McCabe and Robert Sheppard poems in the Belvedere, Liverpool! 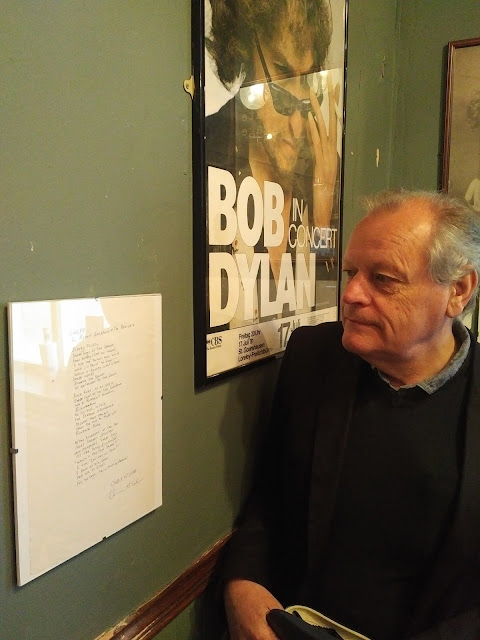 The Belvedere pub in Liverpool is a particularly delightful Liverpool haunt, with a vast range of regulars and locals. One night I was talking to the landlord John O'Dowd about the fact that I knew three poets (the third is Ranjit Hoskote) who had written about the pub (had written poems which feature and name the pub). As he had a holograph Brian Patten poem on the wall already, I suggested he added ours to his collection. On Friday Chris McCabe and I dropped in to the pub to admire our handiworks. (With Sarah Crewe and Patricia Farrell.)

Above you can see me reading Chris' poem (which is about a meeting he and I had in the Belve), and behind me lies my poem, 'Meaning Me', a sonnet from the sequence 'It's Nothing'. If you're in Liverpool, do drop by and read them. And stay for a glass or pint of beer, or even a gin. (John has added to the language the noun Ginnaseum to describe his boozer.

Here's a different poem by Chris that mentions the pub, 'The Poets of Liverpool'.  And my poem appears in Molly Bloom 13 (here, but this link doesn't get you to the right poems at the moment). My poem names some famous and infamous customers; Chris names a famous dog of the pub.

Ranjit Hoskote’s poem about the Belve is online. It’s here.

Posted by Robert Sheppard at 2:40 pm