i.m. John James (and my poem 'As Yet Untitled Poem' for John James)

Sad to hear of the death of John James. We last saw him on this blog at the launch of Atlantic Drift in London in January, see here. He wasn't in the best of health then. Here's me watching him read. 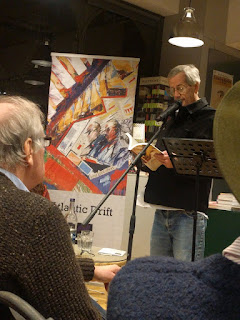 But I also want to remember him at his reading at Edge Hill in 2005, as he is in this photograph, holding his Collected Poems aloft, and as he is addressed in this poem I wrote after he'd left the house with Patricia to talk to the students the morning after the reading. (It appears in Berlin Bursts.) He is an astonishing poet. I'm glad I taught his work to students, and I'm glad he's in Atlantic Drift.


A certain kind of elegance has gone out of the world. 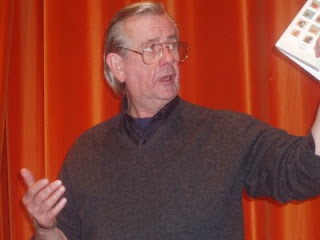 As Yet Untitled Poem

I beg you to hear this boy. And hear him out.
His morning poem you’re in, now,
is neatly creased as a crisp new shirt, stiff-
backed and clipped on its cardboard torso, posed.

It trips you over the cat from the film you’ve never
seen, as you search for your spectacles.
I use my enormous brain to seek the signals
they emit. We are both The Prisoner

on this island, Crusoes of overlapping surveillance.
Sleep is where we’ve come from, captive, a misty place
of drizzled desire and mordant fear. The fog has
lifted, real enough, for the expedition that must

set off for the explanation. Your house-
guest, a sort of vapour that
an opening door dispels, coughs his soft pardons.
Serious poetry is back in town:

the Unfinished Alba of the Unknown
Troubadour, whose vida is word for word. The
beloved of this lyric is the hero of that epic, where
sometimes I did seek, I beg you now to flee this boy. 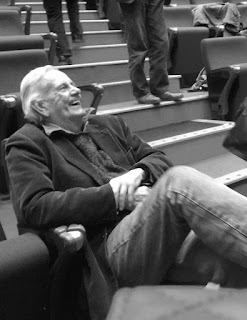 Watch him reading 'Baudelaire at Cebazan' at the LRB here.
Posted by Robert Sheppard at 11:28 am