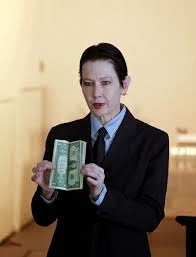 Vanessa Place telling us that money is poetry

Read an earlier piece here on Conceptual Writing. It examined Vanessa Place's contention that 'Form doesn't matter'. Like this posting it it an early draft of a critical work in progress on form.

Vanessa Place's Statement of Facts consists of appropriated statements of the ‘facts’ of sexual assaults, collected unedited from her work as an appellate criminal defence attorney. Kenneth Goldsmith describes a public reading by Place, as he formed the text in his response (clearly responding to her undeniable authoredness, despite the compromised provenance of the words spoken): ‘When you hear Place read these words,’ and Goldsmith responds to three quarters of an hour of this live material, ‘you realize that the vile content of the work is just the tip of the iceberg. What happens to you, the listener, during the reading,’ is the work’s significance. (Goldsmith 2011: 104) ‘I am asking the reader to bear witness, or to choose not to,’ Place explains, emphasising the balanced ethical positioning of the listener.[1] ‘Either way, they become complicit.’ (quoted in Goldsmith 2011: 105) ‘The first reaction is of shock and horror… But you keep listening. It’s hard to stop,’ affirms Goldsmith. ‘The narrative draws you in.’ (Goldsmith 2011: 105) One paragraph reads:

The man fumbled, touching Barbara B.’s breasts with his hands and mouth, then put his penis in her vagina. She could not tell if he ejaculated or withdrew, but he put his penis in her vagina a second time; he also orally copulated her. Barbara B. did not feel a glove on the man’s hand. Throughout, the man continued to tell Barbara B. he only wanted to make love to her and not to hurt her. After, the man told Barbara B. he was going to leave and she should count to fifty. She started counting to herself, he told her to count out loud. As Barbara B. heard the man leave, she asked him to close the door so her cats wouldn’t get out; she heard him go through the kitchen and close the sliding door as he left. Barbara B. then called the police. (RT 917-920, 925) (Dworkin and Goldsmith 2011: 491)

Place’s role as a ‘mouthpiece’ here may be as much a defence for herself (and a hopeless one perhaps) as her ‘real’ defence of the accused in the courtrooms of her day job. Experiencing the staged situation of the reading (Place dresses as an attorney in performance), Goldsmith reports on the effects of this (upon him). ‘I had been transformed from passive listener to active juror,’ Goldsmith realised at some point. ‘She actually transformed my position as receiver of the work, spinning me around in ways that were very much against my will. I didn’t want to objectify my experience but I did. Place used passive coercion’ to engender his complicity, he claims. (Goldsmith 2011: 105) It may seem indelicate at best, or immoral at worst, to attempt a formalist analysis of ‘vile content’, but Goldsmith has already indicated that the content is not everything here. To be moved from a subject position of listener to one of witness requires more than passive coercion perhaps. The most significant formal marker of Statement of Facts is its sheer relentlessness; second is the non-everydayness of the language, the matter-of-fact tonality that records incidents of extreme human behaviour (Place reads it deadpan).[1] We are told ‘he put his penis in her vagina’ twice with the same form of words, a choral device at odds with a rule of expository prose that prefers variations of phraseology over repetition (though, and perhaps because, that is a ‘poetic’ device). ‘He also orally copulated her,’ is an odd distanciating phrase given that the previous statements had been gynaecologically detailed. The following sentence also topples our equilibrium, partly through lack of narrative cohesion: ‘Barbara B. did not feel a glove on the man’s hand.’ Amid the statements of fact, this negative seems all the more (horribly) significant. The oddness of the expression (and oddness is often, or elsewhere, a marker of ‘poetic’ language, both in ancient poetic diction and modernist defamiliarisation) conceals the forensic fact that the man may have left fingerprints elsewhere. Accidental poetic artifice appears in the victim’s name, as it reappears in its abbreviated form; when combined into the collocation ‘Barbara B.’s breasts’ its alliteration seems excessive, inept, tongue-twistingly so if read aloud. ‘She started counting to herself, he told her to count out loud’ is an ungrammatical broken-back sentence, but it feels right to balance the ‘she’ at the start of the sentence and the ‘he’ that answers it in this way. A semi-colon would have been more accurate; two are used correctly in the paragraph to join two statements into sentences, so this was a matter of artifice on the statement-taker’s part. This scribe, to use the ancient term descriptively, is not to be confused with the author Vanessa Place (though Place may have taken the statement). It is Place who has framed the writing, thereby authoring it, as a literary text (as this reading is interpreting it as a literary text).
The poignancy of the conversation between the rapist and victim (to use terms that the statement must avoid at all costs) about her errant cats in this narrative is grotesquely incongruous (partly because in other situations it might be comic). Inconsequential but precise, it is a statement of a fact that may or not be legally important. The unease it evokes may be akin to the unrelated guilt that an examination of diction, grammar, punctuation and alliteration, such as mine, in such a horrific case, engenders. The reference numbers that dot this and other passages of Statement of Facts operate to de-automatize our responses by interrupting the narrative that clearly does not just ‘draw you in’ as Goldsmith reports. The paragraph (the work generally) does do that, but it does more, through operations of form, to disable the reader or listener, and draw him or her into a disruptive formal world of substantiated statements in distanciated sentences. Form operates to make or re-make the text, to frame it and to partly unframe it again by foregrounding poetic devices and prose conventions (and heightening tension between them). More accurately form only appears in acts of forming, which are only operative when the reader or listener per-forms the text for his or her self (and that gender difference may well be quite important to the mode of performance undertaken). It is during these engaged acts of forming discrepant and incongruous elements that Goldsmith (for one) experiences the feeling of complicity he describes so eloquently.
How complicit can we feel, though, when North American TV programmes such as C.S.I : Crime Scene Investigation and its offshoots, and a specific series of Law and Order, Special Victims Unit (or in Britain, The Vice), routinely transform sexual crime (often violent and fatal) into mainstream entertainment? The answer must lie (despite the appropriative techniques used by Place) in the felt authoredness of the statements, in the feeling that ‘the experience of the inventive literary work … arises not from the content of the invention’ – and Goldsmith has directed our attention away from that in Place’s work – ‘but from the reader’s performance of it – and its performance of the reader.’ (Attridge 2004: 102) The ‘mouthpiece’ utters a text only minimally transformed (this is an example of one of Goldsmith’s younger writers ‘literally moving language from one place to another’ (Goldsmith 2011: 3)) but text transformed enough (and well enough) for the kinds of readerly per-formance re-enacted above. The form of the ‘statement’ rubs ever so uneasily against the form of the ‘facts’. Formal concerns are central to conceptual works, it seems, though form may be their repressed that has yet to return in their poetics. (More on form here.)

Works Cited across the last three posts. To see links to these and other posts relating to my The Meaning of Form project click here.

You can read about my own recent poetry here and here, and follow the links to points of online purchase. )

You may read my 'How to Produce Conceptual Writing' here.