Robert Sheppard: A Note on Self-Expression and Conceptual Wriitng 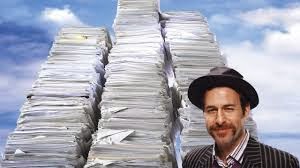 Kenneth Goldsmith secretly expressing himself with the Printed-Out Internet

The ‘secret’ of Uncreative Writing, so far as Goldsmith is concerned, is that ‘the suppression of self-expression is impossible’. (Goldsmith 2011: 9). This is offered as though absorption in acts of poesis are as self-expressive as he thinks his reader might expect other kinds of writing to be, though not in the same way. ‘The act of choosing and reframing tells us as much about ourselves as our story about our mother’s cancer operation.’ (Goldsmith 2011: 9). But this plea to self-expression (which he erroneously equates with acts of creativity) is self-defeating. ‘The expressionist theory of art is empty,’ writes Karl Popper, for the same reason that Goldsmith seems to valorise it: ‘For everything a man or animal can do is … an expression of an internal state.’ (Popper 1976: 62) If this is so then self-expression ‘is not a characteristic of art’. (Popper 1976: 62) For a formalist the quality of poesis must be the characteristic of art; in other words what Goldsmith calls ‘the act of choosing and reframing’. Such an act does not tell as story about ‘us’; it makes a form in the world of forms and that is where the true humanity of creativity and uncreativity is to be located: in the shaping acts of homo faber.

(See all the links to my The Meaning of Form project, including others relating to conceptual writing here.)

Posted by Robert Sheppard at 3:09 pm