Robert Sheppard: The Sacred Tanks of Dagenham (re: History or Sleep, Selected Poems

Here's another de-selection from the Selected Poems, not because it doesn't make the grade, but because the appearance of a number of poems in both Tin Pan Arcadia and Complete Twentieth Century has allowed me to be more severe with their de-selection in the process. This is one of those; it's also a part of the 'Materialisation of Soap 1947' strand (and the original is represented in the selection, as is Schrage Musik, (see here) a long poem included entire, in which George and Pearl (a psuedo-couple like some of Beckett's that appear again and again in Twentieth Century Blues. (As in the last, here. And read here about the whole project 1989-2000.) I forbade their reappearance in  my work, so enjoy their caperings while you can.

The dedication to Keith and Nate was result of their work on the original '1947' poem for its inclusion in the Oxford Anthology of British and Irish Twentieth Century Poetry. Looking again at that poem I decided (as I have done on a number of occasions) to go back to the source material (National Geographic pictures of Britain in 1947) and use them again. See what happens. This was my third and final squeezing of that material, and the most surreal. I like it. Enjoy it. It was also an experiment with lineated prose and was written on 17th August 1999 and is Twentieth Century Blues 66, Articulates 10 (the 10th lineated prose work), Impositions 2 (the second using some technique of using images, I forget what, exactly, and the fourth Materialisation of Soap poem). 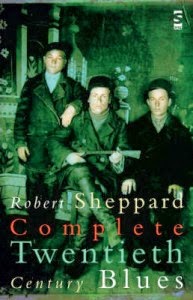 The Sacred Tanks of Dagenham

for Keith Tuma and Nate Dorward


looks could kill and still be made to look good


the frozen symbol of nationhood empire’s dissolution home made


too high for worship


(skilfully carrying water jugs for miles on their heads


will emigrate to to begin again


abed in the crystal crematoria of recent history


(‘and now will croak a few bars for barter


to conjoin George’s triumphal offal language falling from signposts (we work or want; no Other de-selected poems may be read about at the following links:


http://robertsheppard.blogspot.co.uk/2015/01/robert-sheppard-hymns-to-god-my.html
Posted by Robert Sheppard at 10:23 am