Bryan Eccleshall's 'Gone':, Bank Street Arts, The Mona Lisa and My Part in Her Downfall 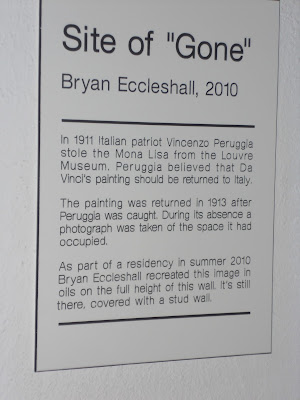 At Bank Street Arts the other day, I suddenly remembered that I'd had brief associations with the place, once to collaborate with a video artist called Jeffery Baker, for whom I produced the poem 'On the Buses', for the 'In Their Own Words' project in 2009, which is now in my book Berlin Bursts, and I also contributed to 'Gone' by Bryan Eccleshall, a project which only exists (now) as the plaque above, which was a response to the photograph of the space where the stolen Mona Lisa once stood, taken in 1911. The poem was probably re-drawn and projected against the wall (in the room where Patricia and Helen exhibited) and the sounds of the inscription broadcast via amplifiers. (I thank Angelina Ayres for describing his process to me.) It is published as part of 'The Motivist Suite' here, on Shadowtrain,but remains uncollected. ﻿


a charcoal moustache floats before the wall


the blond moustache twitches above a melting lip