Robert Sheppard: The Meaning of Form - Griffiths and Fisher

10. The Making of the Book: Bill Griffiths and Allen Fisher

The role of small presses is not simply to publish non-commercial work, but often to form it in terms of text-presentation and book-production. The differing versions of Bill Griffiths’ The Book of the Boat are examined, noting not just revisions in the usual sense, but serial transformations with each printing opportunity, including the whole work as a pamphlet in two different and illustrated editions. Printing and publishing is a form of writing. Allen Fisher’s Proposals is a self-published work, involving the formal interaction of poem, commentary and image, and the open ‘imperfect fit’ of Fisher’s postmodern poetics is contrasted to Quarles’ seventeenth century emblem books, to which Fisher alludes, to suggest that, once more, the forming activities of the reader are fundamental to its reception.

There is more than the work on Fisher and Griffiths to be accessed here, including a long post about small presses themselves. 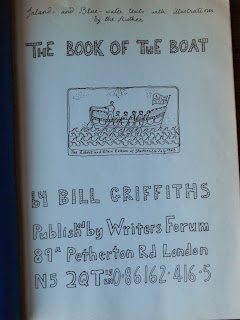 For those who can buy the book, or order it for libraries, here are the places