I read, with Eleanor Rees and Michael Mayhew, in the Dock Road Press reading series, Gramophone Raygun, at the Everyman Bistro, Liverpool, on Thursday 15th September 2016 (the series is monthly).

I have discussed writing sonnets (here) and I read a new short sonnet sequence about our current political complexities, that will probably be called 'Break Out', taking its cue form the fifth and possibly (but possibly not) final 100 word sonnet:

pointed out they all broke out of
wisdom into classic eurocratic distrexit data ... etc...

I delivered them with the celerity I think such poems deserve, and I went straight in, no introduction or announcements, with the words 'didn't think'. (Again here will spell out what these impacted poems are up to, or the form anyway.)

Then I presented the Liverpool launch of my Oystercatcher booklet published this year, The Drop. It is an elegy to my father (see about the book here and my father here) and consists of a short elegiac poem 'The Drop' and a long poem 'Of  Crystal Splinters', which exceeds elegy, it seems to me, as I tried to explain to the audience. It was written from notes taken during the long period of my father's illness, death, coroner's report and funeral, and lots of other things come in. I don't find it a depressing poem. But others do seem to read the headline emotion and extrapolate from it. There's a lot of sex in it (as my friend Geraldine was not slow to observe later in the Pen Factory), and any poem that has a verse about Rhianna and ends with the words 'Orpheus swinging in swingtime' is not completely serious. Though it is serious too. Details on buying the booklet here. It's reviewed here by Ian Brinton, and by Alan Baker, here.

I continued with excerpts from History or Sleep, my selected poems, published just under a year ago, see here. I read a sequence of sonnets originally from Warrant Error as a contrast to the opening new sonnets: I read from 'Rainshine shivers...' on page 120 to 'The young couples' on page 123.

I finished with another uplifting poem (I hope), 'Gravity Be My Friend', a poem written (again as I said to the audience) about going to, attending, and after the marvellous Pipilotti Rist exhibition at FACT in Liverpool some years ago.

Thanks to Mark Greenwood for inviting me.

Details of all my 2015-16 publications are gathered here. (Copies of my The Meaning of Form in Contemporary Innovative Poetry arrived the day before the reading, but I didn't mention it to anyone. I'm rather conscious of wanting to keep the critical activity separate from the creative. See here for considerations of this issue.)

Michael Mayhew is an artist-writer originally from Manchester. 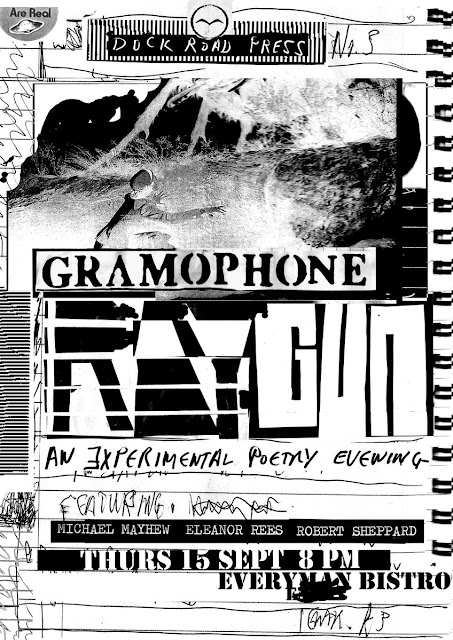