I have just (actually it appeared a while ago but the copy has only just reached me) been published in the special 50th edition of Erbacce, edited by Andrew Taylor (see here and here) and Alan Corkish. 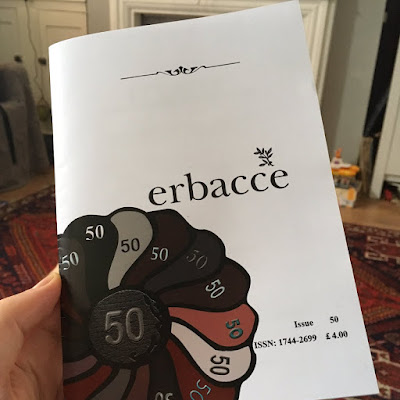 They were both students of mine, as were a number of the invited poets for this special celebratory edition: Natasha Borton (who has featured on Pages a couple of times here and here), Rick Lee, Ursula Hurley, and Jacqui Dunne, among many others!

They have published ‘Empty Diary 2016: Send in the Worms’.

Empty Diaries is a long sequence that ran through Twentieth Century Blues and into the current century's poems: 1901-  and ongoing (again after a break of a decade)! The first eight of Wiped Weblogs: ED 2001-14 appeared in The Literateur. Find them here or here.  The final six appeared in a wonderful edition of Blackbox Manifold. See here.

Cheques payable to Andrew Taylor should be sent to:

Another sequence of 100 word sonnets, 'Breakout' is in preparation. There is one in Robert Hampson's Purge.


It’s strange to feel him writing through me once more
after some years of, if not autonomy, random indication,
Google-sculpting skin-flicks and outtakes of Chicklit.
Posted by Robert Sheppard at 8:00 am