Doped in Stunned Mirages: poems in response to Captain Beefheart

Each responded to a Beefheart album, not in that order but in the chronological order of the albums they were assigned, Jenks to Tookey.

This event took place between 5-6.30pm, but the day began with the Beefheart symposium and a chance to see an archive display and films that will run at Bluecoat. There was music in the evening, but we didn't get to that.


Devised by independent curator Kyle Percy, working in collaboration with
Chris McCabe and Bluecoat’s Artistic Director Bryan Biggs. My thanks to all three!

My diary: A rush to Bluecoat for the Beefheart symposium. Highlights: Lucy Cullen's film about the 1972 Bluecoat exhibition, 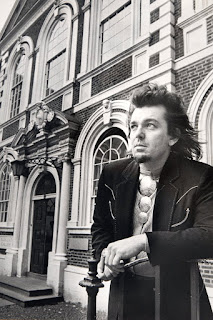 Graham Crowley nailing Beefheart's painting, Alan Dunn's film (with Edgar Jones, who we'd caught at the Handyman a couple of weeks ago), and Patricia Farrell, Sarah McCabe and Peter Finch examining the poetry, Gary Lucas' memories (we bought his new album that received a good review in The Wire)...

Then the poets read: Vanhi was the real surprise, amongst a good set. Not heard her before. Or met. It sold out. Sorry? A poetry reading sold out. Well done, everybody involved...

I read my poem 'Beefore and Never' (which, with the others is published in the zine Click Clack, so I'm not going to quote much of it, but before I read (or beefore I read) I said:

My assigned album was Strictly Personal, a record that was made under adverse conditions and subject to post-production treatments that threatened to impose the trappings of psychedelia - fazing and so on - onto an album that was steeped in the blues. I knew some of the tracks on the album, but not all - and not the first track, whose first meoments delivered a 'strictly personal' surprise to me that coloured my active listening. The Captain was singing and playing harp on a surreal version of a song by his - and my - favourite country blues singer, Son House. The song, in Son House's version, is called 'My Black Woman', and the shock of it was that it was a song I used to sing with Tony Parsons. It was inevitable therefore that my poem, while picking up cluses and echoes from the album, is also a skip through the blues tradition.

Then I read the poems: 'blow in the sunset threading/ bones legs entwined/ swell/ into a cough cut huff' etc...

I decided not to sing a bit of the song and play the harp, though I could have. I found no way to transition from the music to the poem, from my singing voice to my reading voice. I thought the song might obscure the poem. 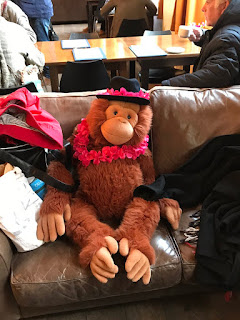 A tan is addressed in her poem. Again, you'll need to consult the zine!

See Chris McCabe's blog for photos of all the poetry events: here.

Posted by Robert Sheppard at 12:35 pm