Robert Sheppard with Others: Twitters for a Lark: the poetry of the EUOIA PUBLISHED

If the right poets for the times don’t exist, then they have to be invented.


Twitters for a Lark: The Poetry of the European Union of Imaginary Authors

is published by Shearsman Books at £9.99 and in available at 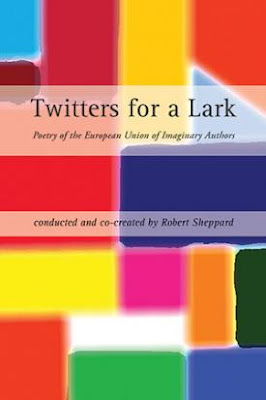 Working in collaboration with a team of real writers, Robert Sheppard has created a lively and entertaining anthology of fictional European poets. There is no resultant ‘Europoem’, but a variety of styles that reflects the collaborative nature of the poems’ production, the richness of a continent. The works range from the comedic to the political, from the imaginatively sincere to the faux-autobiographical, from traditional lyricism to the experimental. Accompanied by biographical notes, the poets grow in vividness until they seem to possess lives of their own.

This collection marks a continuation of the work Sheppard ventriloquised through his creation, the fictional bilingual Belgian poet René Van Valckenborch, in A Translated Man (also available from Shearsman here:

Although devised before the neologism ‘Brexit’ was spat across the bitter political divide, this sample of 28 poets of the EUOIA (European Union of Imaginary Authors) takes on new meanings in our contemporary world that is far from fictive, ‘fake news’ or not.

Twitters for a Lark heralds a new movement: the European Poetry Revival. It is a book that arrives like a new channel forged by collaborative poets, with all past ideals of state rolled up in an old five pound note. This illuminated sect of future Rimbauds lightens the island’s burden, the lights on their vessels burning like the tips of duty free cigarettes.
Chris McCabe

Read about the August 2017 Other Room Manchester reading of the EUOIA poets (pre-launch of Twitters) here.  The EUOIA Other Room reading from last August is now available here.

And read about the Leicester (States of Independence) launch:

There is a review by Billy Mills  Here
Posted by Robert Sheppard at 10:14 am