Peter Riley on my Petrarch 3 and other 'expanded translations'

Peter Riley takes on the following books, thinking that we have all taken on the term ‘expanded translation’ to describe what we are doing. I haven’t, though I recognise that it has been an ongoing title for conferences investigating versioning, and I doubt if others are using it about their practice:

He’s a bit grumpy about the category, which he worries away at, and takes issue with the thought that we (I think I can speak of this collective he assembles, and which I have treated of in my book The Meaning of Form (see here: )) are making versions ‘for our time’. I’m not: I’m positing Petrarch (and later Wyatt, Milton, Surrey, Charlotte Smith and (currently) EBB) against the modern world. He doesn’t need expanded translation, but he can be used as a vehicle to write contemporary poems (which is what Wyatt did, as Riley asserts).


But he does look at my Petrarch 3. I think there's only one translation here, from Petrarch - followed by 14 (not 17 as Peter says) versions; (Jakobson uses the term 'intralingual' translation for that sort of thing, but I've only just received that term). Read more about the book here. He is taken by my use of Themerson’s ‘Semantic Poetry Translation’ technique. And says:

The one that most interested me was a “semantic” translation in memory of, and in the manner of, Stefan Themerson, a name I haven’t seen for many years—a kind of anti-romantic and mock-scientific experimenter who died in 1988. Here the small details of the translation are expanded by paraphrase and explanation within the text until the sonnet occupies four pages.

He is severe on Hughes and Atkins. See here for my take on them, prefatory notes for a chapter of The Meaning of Form, in which I compare their 'difference' and 'distance', in terms of translations as transformation. I have also just finished writing an essay on the writing of Petrarch 3 too, ‘Era il giorno ch’al sol si scoloraro’: A derivative dérive into/out of Petrarch’s Sonnet 3’, in which I say,

Petrarch was pretty clear that translation implied more than faithful reproduction of linguistic features. He warned, utilising a conventional metaphor for translation drawn from apiculture, ‘Take care … that the nectar does not remain in you in the same state as when you gathered it; bees would have no credit unless they transformed it into something different and better.’ [i] This essay involves attempting to trace the transformations involved in the writing of fourteen variations on a ‘translation’ I made of the third sonnet of Petrarch, Petrarch 3 (2016), a partly conceptual, partly expressive, sonnet sequence, made under the sign of Oulipo, but informed by earlier poetic interests of my own, even early poems.[ii] It is at once impersonal and personal. It is, arguably, both hugely derivative and original, though that last judgement is beyond the scope of my poetics as I define it as a ‘speculative, writerly discourse’.[iii] What I can say is that the process was immensely productive, though I would not dare to rise to Petrarch’s aspiration concerning the betterment of the original. As a poet-critic, I believe that my literary criticism must inform my poetics – the mercurial writerly conversation that I have with myself in my journal, with others in explicit poetics pieces, and perhaps in this piece I am writing now – but I do not know how particularly, hence my use of the verb ‘attempting’ above.

Read Zoe Skoulding's response to Riley's piece, a defence of 'expanded translation' here. It's also an account of the Bangor Conference. 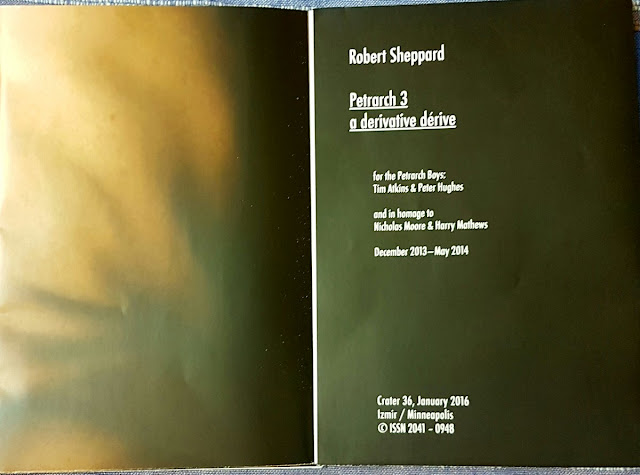 Read more about Petrarch 3 here. I have written in detail about the writing of Petrarch 3 (see https://robertsheppard.blogspot.com/2020/09/practice-led-piece-on-petrarch-3-from.html )
I write about my sonnets generally here, and here and here and here for more on my Petrarch obsession/project, including how to purchase Petrarch 3 from Crater press in its 'map' edition.

Read the 'original' translation (if you see what I mean) and the doggie version here. Then buy it, if you haven't already.

The first review of Petrarch 3 by Alan Baker may be read on Litterbug, here. The second response, by Martin Palmer here.

http://www.manifold.group.shef.ac.uk/issue20/RobertSheppardBM20.html
takes you to excerpts from Hap:Understudies of Thomas Wyatt’s Petrarch (though the first, introductory, poem ‘Perhaps a Mishap’ is not an expanded translation of one of Wyatt’s expanded translations of Petrarch). 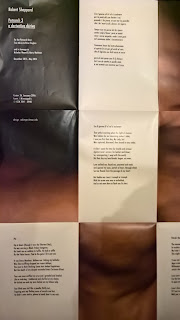 [i] Susan Brigden, Thomas Wyatt: The Heart’s Forest (London: Faber and Faber, 2012), p. 157.
[ii] Robert Sheppard, Petrarch 3: a derivative derive (Izmir/Minneapolis, 2017). This is published in an unpaginated double-sided format (folded like a map). I will include references to the number of the variation (V) and the lines (ll) in the text.
[iii] Robert Sheppard, ‘Poetics as Conjecture and Provocation: an inaugural lecture delivered on 13 March 2007 at Edge Hill University’, New Writing: The International For the Theory and Practice of Creative Writing,. Vol 5: 1, (2008) 3-26 (p.4).
Posted by Robert Sheppard at 3:53 pm