I have a ‘practice-led’ essay in this wondrous volume, Translating Petrarch's Poetry: L’Aura del Petrarca from the Quattrocento to the 21st Century, edited by Carole Birkan-Berz, Guillaume Coatalen and Thomas Vuong, and published now by Legenda ISBN: 978-1-781886-63-2 (hardback)  RRP £75, $99, €85. (Ouch! Try to get a library copy.) 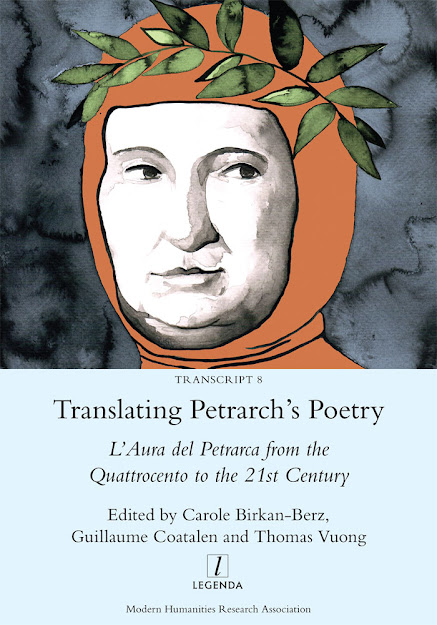 See here for the Legenda/MHRA page for full details (and contents) of the book:

Ranging through five centuries of translations, adaptations and imitations of Petrarch, the father of Humanism, this transcultural, transdisciplinary study considers the echoes of this major figure, whose reach goes beyond borders, eras and literary genres to resonate singularly into our times and in our own resonating ears.

I'm pleased to be share these pages with one of my literary heroes, Jacques Roubaud, and his ‘Elements of the History of the Sonnet from its Italian Sources: Formal Aspects’. His axoim 'All sonnets are sonnets by Petrarch' is provocative for my own 'sonnets'.

The rest of the book is grand too. There are chapters on the French and Spanish reception of Petrarch (the latter involving a Portuguese working in Peru!), as well as on illustrations to, and musical settings of, the text. I enjoyed the chapter on brother and sister team of the de Scuderys, he who abridged the sonnets like Reader's Digest and she who novelised (and satirised) Petrarch's and Laura's married life. The French tried to claim him as ... well ... French. There's a good chapter on Tim Atkins and Emmanuel Hocquard, and another on Geoffrey Hill. I am expecting the book to inform the rest of my Petrarchan project, ‘The English Strain’, which I’ll explain after I say a little more about this book and my part in it.

Tim Atkins’ piece on his Complete Petrarch is also here, which is appropriate, since I owe a debt to him (and Peter Hughes), though they must be exonerated from blame. Let me explain.

My ‘“Era il giorno ch’al sol si scoloraro”: A Derivative Dérive into/out of Petrarch’s Sonnet 3’, in Translating Petrarch's Poetry: L’Aura del Petrarca from the Quattrocento to the 21st Century, ed. by Carole Birkan-Berz, Guillaume Coatalen and Thomas Vuong, Transcript, 8 (Cambridge: Legenda, 2020), to give it its full citation, if that helps with locating it, is an account of my writing the transpositions (as I now think of them) of my Oulipo-inspired variations of a single Petrarch sonnet, after making a ‘translation’ of a Petrarch sonnet to help me write a chapter on Peter Hughes’ and Tim Atkins’ full jobs on the Man, in The Meaning of Form (see here http://robertsheppard.blogspot.com/2016/09/robert-sheppard-meaning-of-form-in_19.html

) and finding myself drawn into the wonderful world of versioning. (There are 7 of the 14 poems complete in the piece, too.) It was quite a new thing for me, and with it came a new tone. In the process, I discovered my inner Byron and Steve Bell!

As I say in the piece:

Petrarch was pretty clear that translation implied more than faithful reproduction of linguistic features. He warned, utilising a conventional metaphor for translation drawn from apiculture, ‘Take care … that the nectar does not remain in you in the same state as when you gathered it; bees would have no credit unless they transformed it into something different and better.’ This essay involves attempting to trace the transformations involved in the writing of fourteen variations on a ‘translation’ I made of the third sonnet of Petrarch, Petrarch 3, a partly conceptual, partly expressive, sonnet sequence, made under the sign of Oulipo, but informed by earlier poetic interests of my own, even early poems. It is at once impersonal and personal. It is, arguably, both hugely derivative and original, though that last judgement is beyond the scope of my poetics as I define it as a ‘speculative, writerly discourse’…As a poet-critic, I believe that my literary criticism must inform my poetics – the mercurial writerly conversation that I have with myself in my journal, with others in explicit poetics pieces, and perhaps in this piece I am writing now – but I do not know how particularly, hence my use of the verb ‘attempting’ above… The creative story I … tell is one that criss-crosses poetics, literary criticism, translation and creative writing itself, and may reveal something about modes of transformation and translational processes.

See here for my first encounters with Hughes and Atkins and with the single poem I produced. You can read here about the famous map-format publication of Petrarch 3 from Crater Press   here and here . It is still available.

The version in the style of Wayne Pratt (one of my ‘early poems’ referred to above, and which I write about in the article, and Atkins mentions in his) may be read here with a short video of me reading the sonnet, less than a minute:  http://robertsheppard.blogspot.com/2020/05/robert-sheppard-from-english-strain-ve.html

The final poem in the sequence (and a farewell to Laura’s aura, or so I thought) may be read here:  http://robertsheppard.blogspot.com/2017/09/robert-sheppard-from-petrarch-3.html

Here’s a rare outtake: the semiotic fringe removed from one of the poems:

Here I am seen reading 'The First English Sonnet 1401', the joke being 'I' got there before Wyatt and Surrey (and Chaucer; dig my Neville Coghill impersonation)!

Read the first review of Petrarch 3  here. The second review of the publication may be read here:

Petrarch 3 is, as I say above, separately available from Crater Press Press   here and here but it now forms the first part of a much longer set of transpositions of ‘English’ sonnets, ‘The English Strain’, the first book of which, The English Strain, will be published by Shearsman later this year.

The English Strain is described here and as is Book Two, Bad Idea here . Parts of Book Three, British Standards, upon which I am currently engaged, are covered here: https://robertsheppard.blogspot.com/2020/03/the-last-of-my-wordsworth-versions-in.html

That one workaday translation of Petrarch set off something huge. From the essay itself you will find how randomly it was ‘chosen’. But I also keep coming back to it. My first 'Keats' transposition takes me back to Peter Hughes' project to spur on my own: http://robertsheppard.blogspot.com/2020/09/an-overdub-understudy-version-of-keats.html 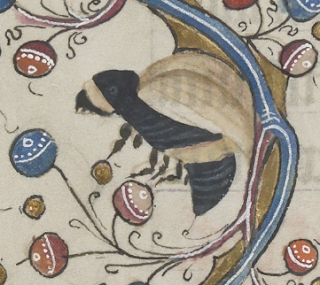 ‘Take care … that the nectar does not remain in you in the same state as when you gathered it; bees would have no credit unless they transformed it into something different and better.’ Pet.