The Firminists: The Malcolm Lowry Conference: 70 Years On (a few thoughts)

The annual Malcolm Lowry celebrations oraganised by the Firiminists this special year included Under the Volcano, 70 Years On: A Malcolm Lowry Conference based at Liverpool John Moores University and Bluecoat, Liverpool. Firminist Helen Tookey worked hard on this side of things.


It opened with a passionate and eloquent keynote address: ‘Lowry’s kindred spirits: 70 years and still counting’, Sherrill Grace (Professor Emerita, University of British Columbia) but I don't have the energy to precis every paper, but just to record how high the quality was. (Note: December 2017: Sherrill's paper did send me off to read Timothy Findley, a great Canadian novelist; I obtained Headhunter, which I found a great read, and one of the best evocations of madness in my experience of literature.)


This year’s Lowry celebrations commemorated not the Day of the Dead, as usual, but Lowry’s 100th birthday and 70 years since the publication of Under the Volcano. This year the Firminists decided an academic conference with a commissioned art work would replace the annual Lowry Lounge and it was a great success. Over the years I’ve recorded it variously on this blog here here and here.

Scholarship at its very best (and I am a poet-critic, never a scholar) involves a care and attention to the text, and an admirable collective responsibility to the community. Friendship over decades and – in the case of Malcolm Lowry – the strange comfort afforded by the professional acknowledgement that readers either ‘get’ Lowry or they don’t. These scholars and enthusiasts do. As they edit and evaluate, they make Lowry.

And the Firminists this year succeeded again in their aim to bring Lowry back to Liverpool.

Lots of good work from Bryan Biggs and Helen Tookey this year.


One always learns about something new at these events, whether (this year) the novels of Timothy Findley or the TV documentary maker, Tristram Powell (with whom I chatted a bit). See a clip from his Lowry documentary Rough Passage here

Here's a link to the performance pieces written for the weekend: 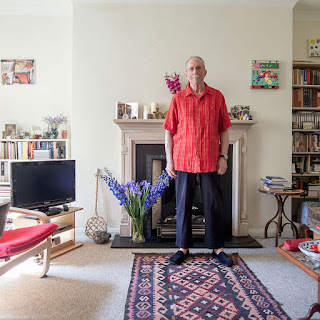 Blackbox Manifold has another fine issue out, number 18, this time with a special section of poems and prose to the memory of Tom Raworth; see the list of contributors below. I haven't read it all yet. But it's here.

My poem 'Tom Beau' is one of the contributions: here.

Earlier this year, I posted three pieces for Tom and linked to some even earlier pieces.

I have written critically of Tom's work a great deal but here's a relaxed take on his extraordinary 14 liners.


But read a decidedly unrelaxed 'On Tom Raworth: The Speed of Writing and the Poetics of What is to One Side' here.

And see my 1999 poem for him from Twentieth Century Blues, posted I.M. here.

But there's more (these posts and links were put of a tribute I put together here on Pages some months ago). How about a passage from my abandoned novel Thelma here which features Tom Raworth as a character? Thelma was my Scouse version of Breton's Nadja!

Tom Beau indeed. He'll be missed... He is missed!

Redoubtable editors Alex Houen & Adam Piette, thanks for this issue.

Email ThisBlogThis!Share to TwitterShare to FacebookShare to Pinterest
Labels: in memoriam, Tom Raworth

He asks some pertinent questions about the effect of what we write when it hits individual readers. He says:

I'm not entirely sure, but I don't think it was Sheppard's original intention to give me work about love that didn't upset me. I might be wrong, but I think he just wanted to write good poetry. Well, he's done both, just in case you wanted to know, and I think it's a welcome change.


Petrarch 3 is still available (see pinned post to the right of this one) and I write about my ongoing sonnets here.

See here and here and here and here for more on my Petrarch obsession/project, including how to purchase it from Crater press.Read the 'original' translation (if you see what I mean) and the doggie version here. One respondee to Martin's blog post said she'd like to read the 'dog' sonnet. There it is: woof! 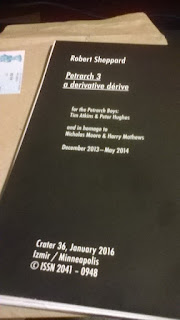 Thanks Martin.
Posted by Robert Sheppard at 12:19 pm

(This video was played at the Sheppard Symposium, earlier this year.)
Posted by Robert Sheppard at 8:00 am

I am pleased to say I have been published in Ranjit Hoskote’s special poetry editorialship of the Indian online journal Poetry at Sangam. See here for the July 2017 edition with links to all contributors plus Ranjit’s Curatorial note.

In his note, Ranjit Hoskote says: ‘These marvellous writers re-affirm that poetry, at its best, is a protest against fossilised habits of thought, against the instrumentalisation of language by slogan, formula, cliché; against the amnesia, the fragmentation of attention, and the constriction of sensibility that are encouraged by the demagogues and hypnagogues who dominate public life. Sheppard, Robert Sheppard, Byrne, James Byrne, Srilata, K. Srilata, Edwards, Rhian Edwards, Miller, Alice Miller, and Sagar, Arun Sagar, reclaim memory, time and intensity of focus for us, their readers – and these are immensely precious gifts.’ I hope that I live up to that.(The links above take you to their contributions and biographies.)


I decided, partly because I’d checked the format of presentation to provide a selection of six discrete poems, but they do form a nice set, one I could imagine reading together one day. They are:

The Fugger of Wonderful Black Words

One of my Milton’s ‘overdubs’, dedicated to Tim Atkins, a sonnet. Another one here: ‘Avenge’, another sonnet, a contrafact on Milton’s ‘Avenge O Lord…’, featuring elements concerning the (female) Yasidi resistance to IS. And another here:

This is fairly new, again sonnets, but from a sequence, recently been published in International Times here… They are what they say they are, but Wyatt appears in them as himself and as his modern analogue, a foreign office spy on a secret pre-Brexit mission…

Empty Diaries was a long sequence that ran through Twentieth Century Blues and into the current century: 2001-14. The first eight appeared in The Literateur. Unfortunately a magazine now offline (or do I mean, completely disappeared?) However, the final six happily appeared in a wonderful edition of Blackbox Manifold. See here. This 2015 one has a touch of the bonna nova about it.

This is from a series of birthday poems, in this case for the Liverpool poet Eleanor Rees.

A response to the art of William Kentridge, a brilliant exhibition at Bluecoat in Liverpool.

Quennet for the Artist Pete Clarke 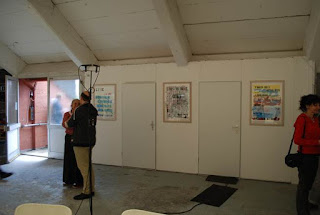 A piece that Pete used for the print that was a runner up for the Adrian Henri Prize a few years ago. See here and here and here for more images and links. 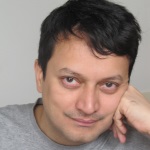 Ranjit Hoskote, whom I met, as he suggests, in a pub in Liverpool (this one, about which he has waxed lyrical here) after his wonderful biennial talk-poetry reading, is a poet, cultural theorist and curator. His collections of poetry include Vanishing Acts: New and Selected Poems 1985-2005 (Penguin, 2006) and Die Ankunft der Vögel (Carl Hanser Verlag, 2006). His translation of the 14th-century Kashmiri mystic Lal Ded has been published as I, Lalla: The Poems of Lal Ded (Penguin Classics, 2011). He is the editor of Dom Moraes: Selected Poems (Penguin Modern Classics, 2012), the first annotated critical edition of a major Anglophone Indian poet’s work. Hoskote’s poems have been published in many anthologies. Hoskote has curated or co-curated numerous exhibitions, including the 7th Gwangju Biennale (Korea, 2008); he curated India’s first-ever national pavilion at the Venice Biennale, under the title ‘Everyone Agrees: It’s About to Explode’ (2011).

New Poems by Ranjit Hoskote (from the July 2017 Issue itself)

Natural History
The Swimming Pool
Posted by Robert Sheppard at 8:00 am

Robert Sheppard: Working on 2 anthologies at the same time: Atlantic Drift and Twitters for a Lark

I mentioned in these posts that I was writing the blurb-matter for one of the two anthologies I am editing at the moment, that one being the fake anthology of fictional poets (the EUOIA poets who may be read about here), which is called Twitters for a Lark and which is scheduled for publication by Shearsman. I speak of it here, but of course, there is the other anthology, Atlantic Drift: an anthology of poetry and poetics which I am editing with James Byrne.

What is the connection between the two? Oddly, quite a lot. Obviously all the editorial tasks of proof reading and preparation are similar. But I have realised that there are a few poets in common. I don’t mean my fictional poets, of course, but the collaborators that I have been working with on one, appear as themselves in the other: Allen Fisher, Steven Fowler and Zoe Skoulding are in both volumes. My co-editor of one, James, is a collaborator for the other. Both publishers are called Tony.

Yes, I’d love to say that the fictional poets were more difficult to deal with than the real ones, but neither group has been difficult in any way. And we have been helped by a group of interns at Edge Hill University Press. Although, thinking about it, there is a fictional intern to the EUOIA, the poet Jason Argleton, also of Edge Hill, according to his biography in Twitters. There's a poem of his here. So he must be real (in some sense).

Another connection is that both books are scheduled to be celebrated in the same week, one at the Edinburgh Book Festival, the other at The Other Room in Manchester. I’m sure you can work out which one is which, but just to say that I’m hoping many EUOIA collaborators will appear in Manchester. (Note: 9th September: See here for an account of that evening.)

Of course, the poets in one anthology are more than welcome to turn up for the launch of the other, though (rising to the Bob McCorkle aspects of the project) the appearance of a posse of EUOIA poets in Edinburgh might prove a fissure in the substance of reality that we might not survive.

Frances, J., (2017). Robert Sheppard Symposium. It's in the online version of the Journal of British and Irish Innovative Poetry, now edited by Scott Thurston and Gareth Farmer

Thanks Joey for such a comprehensive account of the papers that, as you say, I deliberately absented myself from, in a fury of aspirin and headache metaphors!

More on the Symposium itself here:

In the evening following there was a reading by some of the most prominent poets in the UK: Allen Fisher, Robert Hampson, Zoe Skoulding, Antony Rowland, Patricia Farrell, Nikolai Duffy, Rhys Trimble, Natasha Borton, Scott Thurston, Andrew Taylor and others. See here for videos of their readings (and mine).

Visit the hub post to take you to all the posts concerning the Ship of Fools exhibition which documented the publishing of Robert Sheppard and Patricia Farrell, alongside the sympsosium here. Lots of images.

There are also some photos of conference sessions taken by Rob Edge here. You can see them all thinking.

Joey also mentions the KFS festscrift An Educated Desire that is available here, along with a sample and a list of contributors. 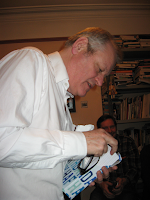 That really is enough about me! One thing I need to do is get back to the interview Joey is conducting with me about Pages in its original print form.
Posted by Robert Sheppard at 8:00 am