for Scott Thurston (on his 40th birthday)


Suddenly you are inside the house. Standing in the old entrance. The garden hall or vestibule

The little Corot landscape’s here. All pictures domestic scale. The Holman Hunt propped on an easel. A magnifying glass swinging on its string

One painting shifted a little to the left to fit another in. The nightmare of George Holt’s handyman

Trade with Brazil. Not one image of this life
Florentine swelter. Crackling through the horse chestnut leaves. Crisp. Liquid electricity

Doric columns rise either side of the fireplace. The faint tinkle a chime. A tintinnabulation of the silence out of which a painting may be conjured

Far from the Paris Commune. A tornado of options. Poplars. As though time has ceased. Moments stretched. A loose bowelled cow flaps its flanks

A chiaroscuro whisper. We pick up. Each other’s senseless sense and fly with it. Enacted in that series of rooms (in which this was largely written

Enter. Gainsborough over the fireplace. The last purchase. At 3000 guineas the most expensive

Moved in 1884 from Edge Hill. To overlook the Mersey. Holt extended the building. Died there 1896

Perspective distorts the carpet’s intention. Poems were written at this desk. Liberty spelt out. The tomb long open and the trees crouching for a peep inside

Tall windows: granite melody in a haze. The channel. Silt bank. Catches light from over the water. Wish for mist. On the distant Welsh hills. Or mountains. The single hammering at 1 o’clock you mistake for the butcher’s boy’s sharp bell

Posed but never poised. A dreamy girl with a creamy neck. Ready for a ball or bell

‘Each cascade of time blushes me up for grief.’ A Punch and Judy hammering of the meridian. A porcelain jug full of bits. Bobs. You know the stuff. Things

‘I should know these things I don’t. I’m designed to be merely cherished. After death

Bookmarks mark. Wisdom, a crumple of promises clutched in sweat. The cobbler bangs out his unspoken love for her on the soles of her broken shoes

‘Byron might have imagined me! Or worse! Shelley would have mirrored me! But I’m tucked away that unique thing a fake! Insert me into the language of which I am composed

Trees weave. Time is a turning page, every quarter of an hour. Chime. A slow three-decker telling of empty dandy chairs lusting the wrong way round

The garden vestibule (again) ahead of you into the library where you stretch. How do tall shelves of books become a Library

At the sarcophagus your writing will be prophetic. What will be. When it is done

Someone will slouch in your creaking armchair and frown at your words. Its marbled blanks

Desiccated copy of Byron’s Poems. Dropping brown powder from its spine. Into your lap as you turn the pages. Curtained secrets. Of quiet decay. Exposed to light, crumples. Breathless, wind-chimes

You were looking for a remarkable symbol. Trudging the green lane. To the front doors you have already forgotten. A silver glow behind the nets. Illumines the desk upon which the bills were once paid

She holds a letter from the Dean. From that archive of illegible documents held in paint

Ribs blush over a riverine council. Of peasants. The drought. So perfect that any blemish would turn the day septic

The title sprinkled from this book. Tinkling. Angel dust flaking from the walls of a fresco. During a riot

Something. To be something. Must be darker than the darkness. Viol burns its madrigal. (While Hopkins is spat at by Holt’s stevedores

Out into a room which is not a room. The unseen inhabits the scene. Dwarfs the people. Undiminished not quite vulnerable. In the oil sketch. Measured chimes of human anthems

Weirs crash upon Venetian thoughts. She’s suddenly seen you. From the new entrance. Entranced fascination. Opening your hatch you admit much pleasure. Delirium soaks the tedium

Etiolated and brittle. Bristles of genre. (Remember lavender alive with bees swaying after the storm?) Floor bathed with light. An amber glow as it rises from polished boards soaking into scarlet walls

Somebody watches you from the balcony. A flicker of interest in your lack of interest. Your room a tumbling red cube for his pitching vertigo

Coleridge held that Unitarianism is not Christianity although some Unitarians are Christians – which ones? The window at this diagonal. Nine more steps. The morning room

‘Saw the child stamping and stamping on the ants. I wanted to cuff him

Trees, the slate-grey Mersey. Any industry at its shore is ‘ruralised by distance’ in the conceit. That other blue distance. Welsh mountains. Or hills

Slit the morning post beneath the woodblock variegations, the Pre-Raphaelite dazzle. The tinfoil-crackle tones of Tennyson and Browning

This morning’s lesson is the dust that rises from a beaten carpet. A knocked up bit of greatness. A hand on a keyboard, too many naturals. A fantasia in black and white

The temple (again)! Without even a Fra Fillipo Lippo wink at you. A startling eye looms in the magnifying lens. A falcon dives. Rips into the neck of the dove, this premature Transfiguration

Bays picked to shreds. She threads beads. Roses, the tiles at her bare feet. As though a wish could fall true on this marble. Breasts ghosted through thin robes. Poised as a sponge of poison squeezed into your limpid pool

Into the dining room. Pass the Italianate marble fireplace with the Holt crest

Schloss Rosenau. It’s an isle, an aisle even, of light. Sufficient to allow divinity or human majesty its approach. The radiance of patronage. A smeared palette. Or the palpitating shade which you cannot penetrate. They are not human enough: boy tensing his fishing rod, girl floating on collapse. Their scattered picnic. Crouching mendicants at some filthy game. Fawning before an oblivious consort

They scratched away the cracked sky to find Margate sun. The ‘lighthouse’ is a white-hot brushstroke a blemish on the skin of night. With what confidence could you mount those steps to the promise of a quayside?

Imagine that you have bought a painting. The painter requests you loan it to him. Early picture on which Turner spent six laborious days at the end of his life. But it came out with a whitened misty sky and a double rainbow. Spectral retribution. Painted over. Not over. When it returns the painting has darkened. Less lightning burst than rainbow. Obliterate the eye’s asperities

Look closely Cousin George the magnifying glass. The startling eye looms. The beginning of his interest in Surrealism. Reading to yourself. Reading yourself. A monstrous porthole

This rectangle, no larger than a servant’s mirror. The family’s wealth derived from shipping – the company Lamport & Holt

Black is a shade of white. Clouds sails sea-crest. Black-tipped gull comes to rest. In the rest. Say you are rendered. Wordless the memory of a memory of men. Loading a ship dreamt about, starkly

Peer into Bonington’s moment for as long as you dare

Look away. Listen. Tear the image as though it were rotten canvas. An old painting a dead sail. Turn away

The staircase hall beckons. Between two pairs of columns. You sense how the stairs’ course was altered. To face you. At last. Mount

Upstairs. Part the nets. If anyone is watching. With both your hands, either side. A triangle. Watch yourself from behind

This is the view they built here. The sloped lawn, the billowing trees. Afar: the same hills or mountains without features. A study 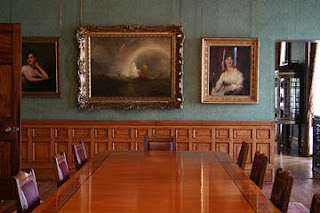 ‘Sudley House’ was realised as a guided tour/performance at Sudley House, Mossley Hill, Liverpool, in four shows on 6 and 12 November 2004, with Scott Thurston as second voice and presence. ('Someone will slouch in your creaking armchair and frown at your words.'/'Somebody watches you from the balcony.  A flicker of interest in your lack of interest. Your room a tumbling red cube for his pitching vertigo.') Props included recordings of Tennyson (1890) and my 1793 edition of Cowper’s Poems (Vol I). Read the history here. And an account of those 2004 performances here.

I would like to thank Scott; and Jane Duffy and Alex Kidson of the National Galleries of Merseyside for allowing me to act as Visiting Scholar to Sudley House, and to the latter for his whistle-stop private tour of the Emma Holt bequest. Thanks to all the staff at the House for making my writing visits so pleasant, and for the smooth running of the performances. I readily acknowledge monies from (the then) Edge Hill College of Higher Education School of Humanities and Arts Research Development Fund to enable this work to be developed in its original form. The performance text is available on Great Works at this link. Many thanks for Peter Philpott for publishing it. This new text was largely prompted by the re-hanging of the works and thus the rendering fictive of my movement instructions and narrative. ‘Cousin George’ is George Melly. There are several quotations melted and re-formed in the text, particularly Ruskin on Turner, but also Turner’s detractors.

This has been posted to celebrate Scott's 40th birthday. Happy Birthday. Watch him here:
http://www.youtube.com/watch?v=wK5BlSqzCoQ
Posted by Robert Sheppard at 12:00 am


The city builds into sky, annexing uncharted
Everests. You hold the aerial photograph,
simplifying by geometry, distance, like Empire itself,
its Exhibition. Scots pipers grumble their way to Tut’s Tomb.

A moment frozen in butter! The sculpted disaster
of Jack Hobbs bowled out! Hungry kids lick his creamy pads,
dreaming of tiptoeing across Margate sands for their annual.
The nose of the bike’s side-car (hold on to your bonnet

Doris!) is an aeroplane of the motoring roads,
its spinning white-walls the prayer-wheels of modernity.
Hot-breathed from Colman’s, Imperialists funnel

the rustling throng into atmosphere for a Saturday night
broadcast from His Master’s Voice exhibit,
a dining room dominated by its cenotaph of sound.