Read another work supposedly by Rene Van Valckenborch and supposedly translated from the Flemish (side of his double oeuvre) by Martin Krol on the excellent Ekleksographia webzine, as part of the post-Oulipo issue edited by Philip Terry. Read the introduction to the quennets and follow the link to the poems themselves (a pdf).

Happy New Year! (They ended up in this book.)
Posted by Robert Sheppard at 10:35 am 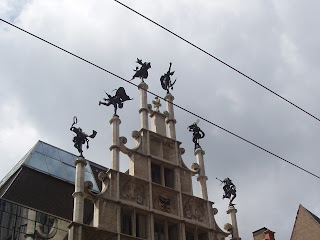 astle wall
/bag of ce
ment flat
ened and b

Posted by Robert Sheppard at 10:32 am 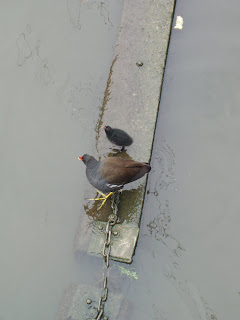 ■ 98 a moorhen and fluffed chick stand on the girder wet webs safe from tidal flow/all motion is relative/cannot be seen beyond their conception
Posted by Robert Sheppard at 9:57 am 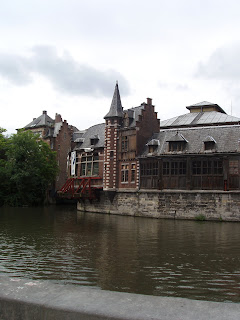 ■ 95 the buttressed bulge below defeated windows/cannot be seen beyond their conception hoisted from river/sagging over the waterline on the bend
Posted by Robert Sheppard at 10:29 am 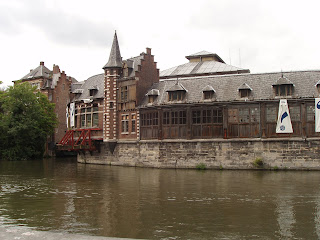 ■ 94 the buttressed bulge below defeated windows/analysis destroyed the solidity of this fisherman’s house/sagging over the waterline on the bend
Posted by Robert Sheppard at 11:48 am 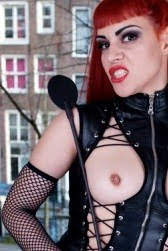 ■ 87 past her snarl windows across the canal she tightens her open cup leotard adjusts crotchless crotch lets the world pass brushing her breasts
Posted by Robert Sheppard at 11:03 am 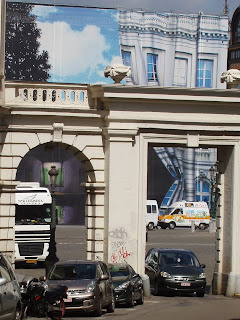 ■ 83 thru’ marble arch tarpaulin on which Magritte’s curtain-building is opening on flat summer skies (behind which dreams the renovating palace)
Posted by Robert Sheppard at 12:51 pm 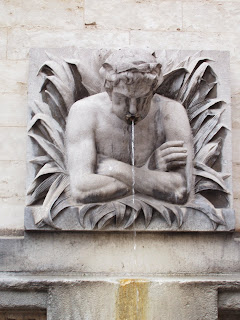 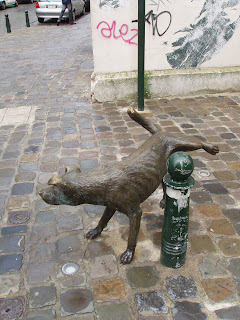 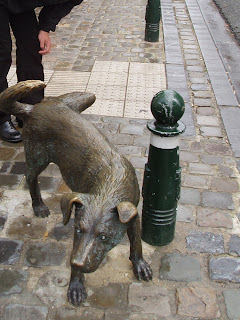 ■ 73 a set of real operations made the man in a kagoul bend over to examine the dog’s arse/another set made the dog-cobbles-bollards-street-city ■ 72 stone dog cocking a leg against the corner bollard rue de Chartreux monumentalising this quotidian moment fleeting active yet still on guard
Posted by Robert Sheppard at 10:50 am 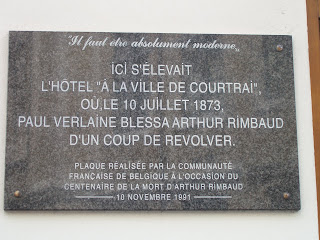 Twitterode 63 and a possible sighting 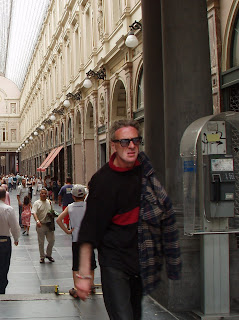 
Does this image actually show the author?

Dylan Harris, author of the excellent Antwerp (Wurm Press, 2010), reckons he's had an encounter with Mr Van Valckenborch on his travels. Read his account at

http://dylanharris.org/prose/poetry/rvv.shtml
Posted by Robert Sheppard at 9:53 am 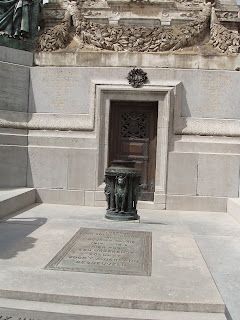 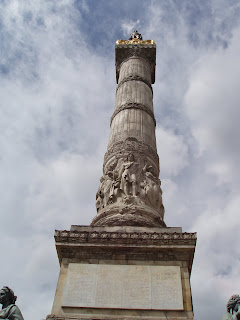 ■ 61 un soldat inconnu competing with discourses to travel to a ring of growling gryphons holding up the dish of flame for een onbekende soldaat ■ 60 aloft column beyond gilded fringe Léopold heading up clouds/below gold extracted from the c(o)re of the 1831 constitution
Posted by Robert Sheppard at 2:12 pm 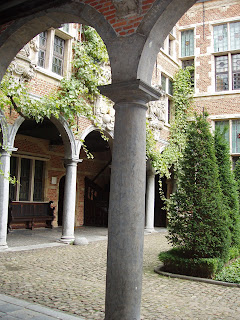 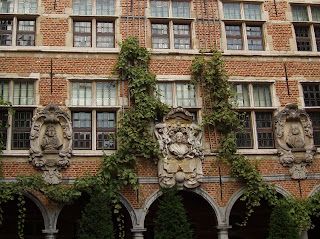 42 heraldic ensigns horizonless on the thick glass of the windows of the Huys der Liefde/pulled inside out a house of Lipsius/Montanus/Ortelius ■ 41 unseatable throne? ■ 40 rhinolalia muzzle nudges for a broken song ■ 39 aloft surveying all that isn’t his mistaken for shirtless carving beside stirring gauze that screens the equine statue/its doubtful gestures ■ 38 reclusive Balthasar’s golden compass grips the globe crippled inky fingers measure the surface of maps the ridges of print on finest paper ■ 37 the marvellous is awkward/scribbling among Plantin’s shelves dialoguing with categories the moment’s historian shot through with knowledge ■ 36 produce this house as you move through it reading the print and map rooms navigating your history thinking about what’s not present/leaning ■ 35 Plantin’s image rises from brickwork latticed windows like uncut sheets: proofread the bookish house looking inward to its garden
Posted by Robert Sheppard at 2:25 pm 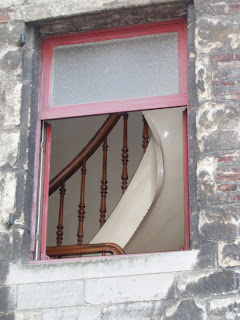 (Read the stream as it appears on Twitter here. There are less than 10 posts left, until it reaches 100.)
Posted by Robert Sheppard at 4:10 pm 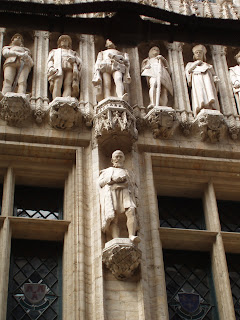 ■ 20 sculpted sleep as lids are moulded shut/a masturbator’s grip upon the mayoral scroll LEONARD VANDENHECKE ■
Posted by Robert Sheppard at 11:56 am 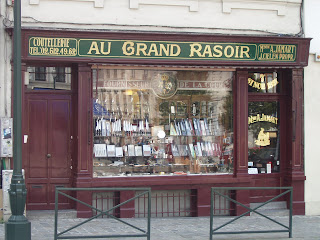 ■ 16 rows of knives scissors for variation a syntax of blades behind the window of the coutellerie a razor’s discrimination between flesh and air
Posted by Robert Sheppard at 7:42 am 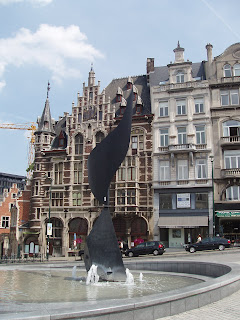 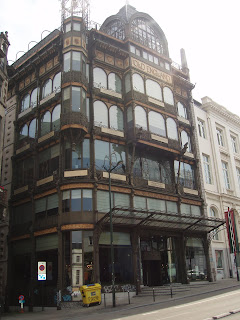 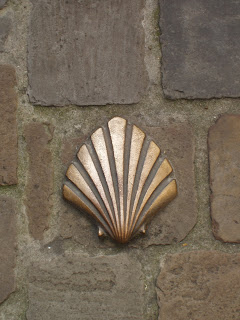 ■ 11 brickwork syntax with wide cement connectives hanging there and/or sculpted there heraldic and abstracted the shell of the shell
Posted by Robert Sheppard at 8:42 am 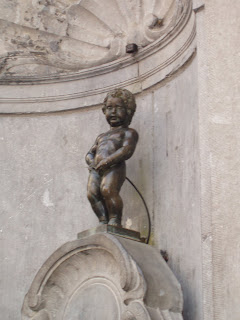 ■ 10 more an homunculus bent knees whorish pelvic stretch: the curved water pipe up his arse launches a parabola his eternal stream completes ■ 9 not botticellian scalloped arrival dispersal of piss-steam piddle-trickle the smallest statue of illiberality in the world
Posted by Robert Sheppard at 9:54 am 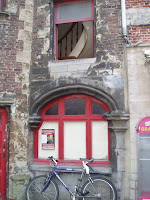 (his Flemish half, translated by Martin Krol) (They ended up in this book.)
Posted by Robert Sheppard at 11:36 am No comments:

The Given (prose unwritings of autobiographical texts)

Looking thru' a Hole in the Wall (poems about Berlin with images by Patricia Farrell).

(cheques made out to R Sheppard)

You can also read about writing The Given below in the last post.

The Given will be launched on 30th September at Anthony Burgess House in Manchester : 7.00
(with Scott Thurston and Antony Rowland)
Posted by Robert Sheppard at 6:26 pm

Email ThisBlogThis!Share to TwitterShare to FacebookShare to Pinterest
Labels: Berlin Bursts, Sheppard, The Given, Words Out of Time

Robert Sheppard : Writing The Given

an account of the writing of The Given (Knives Forks and Spoons: 2010), part one of the autrebiographies now collected by KFS as Words Out of Time in April 2015; buy here. (The Given is no longer available separately.)

This work began as a project – out of an existential dilemma – to deal with particular MATERIALS: the piles of journals, diaries, and less categorisable autobiographical writings that I have accumulated since 1965 when they began, and that I have periodically attempted to use for writing. In its opting for PROCEDURE it is thus a conceptual project, but is perhaps not quite an example of ‘uncreative writing’ as that term has come to be used, but is a creative ‘unwriting’, to adapt a term I have used to describe my earlier texts refunctioned or re-moulded from others. Perhaps the work might be thought of as an ‘unwriting through’ of the MATERIALS, but such proliferation of terms is only useful if it assists a gloss on PROCEDURE.

Part one began with a simple notion: that I would list – in an ironic reference to Joe Brainard’s influential anaphoric I Remember – all the events that I did not remember as I read through these records anew. I anticipated a ten page work covering 34 years. Instead I amassed 34 pages but I only reached 1979 (the end of ‘The Hungry Years’ and the beginning of ‘The Drowning Years’ in my personal periodisation)! Before beginning this project I had an unjustified belief in the accuracy of my memory; now I felt like Confused of Hippo, whose words I used as an epigraph to that first draft:

The re-discovery of a series of autobiographical fragments written in 1989, ‘Voices in White Noise’ provided a series of sharply delineated memories (some of them lost over the intervening 20 years) to counter the record of forgetfulness. I combined and selected from the two texts, using a stochastic method, aiming at concision and counterpoint, although the ‘I don’t remember’ sentences dominate. The simple PROCEDURE had thus begun to grasp the complexity of the MATERIALS with scant regard for autobiographical shape. The text is allowed to make its own history, to become the biography of a practice of writing rather than my autobiography, or ‘My Life’ to refer to the title of Lyn Hejinian’s text that had both inspired and hindered me over the years. So much for memory. (Part one is also published in The Alchemist's Mind  edited by David Miller - and I have also selected it as part of my Selected Poems: History or Sleep.)

Part two has a simple PROCEDURE – to ask one (difficult) question of the ‘hero’ of the text after reading each page of the MATERIALS, an intensely written lengthy, detailed journal. It thus distorts the passage of time, since only 1979-1982 are ‘covered’ in this exhausting paragraph. Not all the questions were finally selected and the order again resists, but does not obliterate, temporal sequence.

Part three deals with the most transformative years of my journal writing and the most rapid development of my poetics. The PROCEDURE adopted is largely that used in writing Letter from the Blackstock Road, which was written during this period (1983-1993) and is referred to in the writing: the accumulation of text and the working of that through a stochastic method of using guided chance, liberated choice, dice and eye, hand and mind, a kind of improvised textual performance at the desk. 2

The final section posed different problems. The diaries which stretch from 1994-2009 (supplemented by a few notebooks) are written in a deliberately non-literary style and often record banalities. I decided to settle on the months of May – season of elections in particular – and to account for each one (we had now moved into ‘The Age of Irony’ and ‘September 12’). I was thinking of the ‘mayday’ strand (1997-99) of Twentieth Century Blues which intertextualises these writings.3 An early draft – one paragraph accounting for each May – appears in Erbacce 18 (2009), but I wanted to disrupt chronology further to allow the MATERIALS to speak in their own new-found voice, and did so by re-adopting the PROCEDURE of one of the ‘Mayday’ texts themselves, ‘Report on Seaport’, which was written around the 1997 General Election and whose MATERIALS (sentences) were arranged in alphabetical order. (This is referred to in the text and thus it describes its constraint.)

These writings, even down to finding a title, have been the most troublesome that I have attempted. (At one point I intended to interleave between the sections other writings: the autobiographical piece ‘Malcolm Lowry’s Land’, 4 the critical article ‘The Colony at the Heart of the Empire: Bob Cobbing and the Mid 1980s London Creative Environment’, 5 and the meditation ‘Critical Tuning: Radio Interference and Interruption as a Poetics for Writing’ 6.) As the text attests at various points, this is not my first attempt, nor my second, at such a project. Despite the boldness of PROCEDURE the processes of editing have been as arduous – if not more so – than in other, less conceptual unwritings.

The Given is reprinted and now only available as part of my autrebiography Words Out of Time: see here and here. But  it's all still there!

Email ThisBlogThis!Share to TwitterShare to FacebookShare to Pinterest
Labels: autrebiographies, History or Sleep, Sheppard, The Given, When, Words Out of Time
Newer Posts Older Posts Home
Subscribe to: Posts (Atom)