Patricia's new book is out. Details below, but check out her new webpage if you haven't seen it here. Hear some of the poems read on the Archive of the Now here. 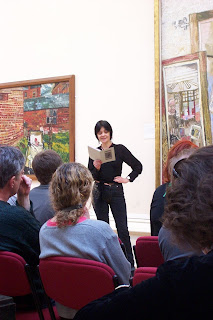 Published 15 January 2013 TODAY
"Patricia Farrell's latest collection engages in an extended thought experiment to test the philosophical veracity of language. Needless to say, language is found wanting, yet in these extraordinary enquiries something desirable is recovered. If 'the things I see when I read aren't real,' this investigation into subjects as diverse as scale, orientation, colour, light, time, animals, angels and death offers a complex and sceptical vision of a world in which 'there is only movement.' Via encounters with the troubadour poet Guillaume of Poitiers, Friedrich Hölderlin and the contemporary goldsmith Jivan Astfalck, Farrell offers 'new solutions / new songs,' whilst 'provoking new lines of thought.' This challenging work might make us feel 'hardly more than poets and not who we really are' but who cares when 'tongue play makes sense like this'?"
—Scott Thurston
Patricia Farrell lives in Liverpool. She is a poet and visual artist. She co-organised the SubVoicive reading series in London in the 1980s and was a member of the arts group New River Project. She has collaborated with other writers and artists, most notably Robert Sheppard, as well the installation artist Jivan Astfalck, on the project B*twixst, and with Jennifer Cobbing, and Veryan Weston on the dance piece, A Space Completely Filled with Matter. Her work is published in a range of magazines and collections, including A New Tonal language in the Reality Street "4 pack"' series, as well as individual pamphlets: most recently, Seven Bays of Spirituality (Knives Forks and Spoons Press). She completed a PhD thesis in 2011 on poetic artifice in philosophical writing.
http://www.shearsman.com/pages/books/catalog/2013/farrell.html

Posted by Robert Sheppard at 11:23 am

For about six New Year’s Eves now Steve and I have met up to improvise rough 'barrelhouse' piano and vocal jazz, blues and standards at Maggi Williams’ legendary parties upon the family’s increasingly out of tune piano (I can’t use my blues harps with this machine). Steve was the keyboard player and founder member of the Liverpool band The High Five in the 1980s and his latest band is gigging under the name Cat Sundies. We meet in pubs throughout the year, casually, and discuss the set, but otherwise it’s made up as we go. This song, Steve’s piano work and my rendition of lyrics lifted from the 1931 Barbecue Bob classic ‘Motherless Child’. It was somewhat later that usual, drink had been taken, and friends can be heard uttering ‘Steve’s turned up, so Robert’s happy,’ and ‘They’re reunited!’ as they take leave of the party! I did some jazz scatting and vocalese after this, prompted by Ian Perry’s Christmas present, a Kurt Elling CD. No trace of that influence here; a straight Joe Turnerish blues shout above the noise of the party.


As I put it in Twenieth Century Blues 53 (Midnight Ride 2, Smokestack Lightning 2, Unwritings 7): 'This romance surrounds you, this late century blues in an unplayable pack of quotations in quotes; crude effects play oddments’ tricks. They’ve got another bill, poisons of crimes, looking from musician to musician, transposing keys: a guerrilla tactic somebody’s aching fingers will track and hammer to death, night after day after night.'


This is rather different from my performance of 'Smokestack Lightning' here.

Posted by Robert Sheppard at 7:31 pm