My transposition of a sonnet by John Clare, from British Standards, is published on Beir Bua

I’m pleased to say another poem from British Standards, a ‘transposition’ of the poems of John Clare, the first of that set to appear, as text, I think, is published in Beir Bua.

Thanks to the noble editors involved. And you can check out the rest of the contents: journal – Beir Bua Press

Unthreading John Clare’s poems once or twice turned me into a bona fide animal poet (as the lockdown turned me, and everyone, into a bird watcher (and listener: the (possible) song thrush that appeared at 4.00 each afternoon finds his or her way into another Clare transposition, as do more common blackbirds, into another, with their ‘chup-chup’!)).

Here I am with a ‘flash of yellow-green’ in my borrowed hat reading the poem I love to see the old heath’s withered brake (or its draft) on the day I wrote it, 16th December 2020, looking daft for my draft, as it were:

It was my habit (ritual is a better word) to make one of these little videos and post them on this blog temporarily for a few days to signal the progression of the work. (And, it strikes me now, it was a way of dealing with the lack of public poetry readings during that period, though I would have done it anyway.)

words on the reference to Audubon's robin:

On the fallen ash stump, a

trill, all life in its eye –

out of the generation that

in a line’s quick fling.

Here’s a different robin (I think, though it could be the one he sketched at Greenbank) painted by Audubon: 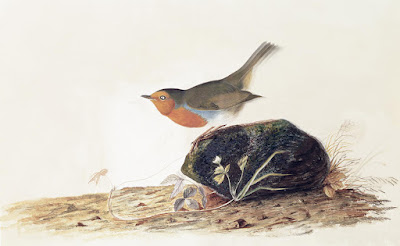 Although the Victoria Gallery was closed to the public when I wrote the poem, I remembered seeing in an exhibition there that Audubon had stayed in Greenbank House, which is just a few minutes’ walk from where we live, with the Rathbone family, and that he was love sick while there, AND that he had drawn a robin. I couldn’t re-visit the gallery, but I could have found it all online here (but used my memory of earlier visits instead):

The story of Audubon in Liverpool is told here:

(He’d also turned up in my reading of Denise Gigante’s The Keats Brothers. Cambridge, London: Harvard University Press, 2011, where he diddles George Keats out of all the money he and brother John had tried to extract from their ‘benefactor’. So he fluttered across two of my poets in British Standards). The dedication to Christopher Middleton benefits from explanation. Often thought of as one of our great experimentalists (correctly!) he was also a great writer of animal poems, and I was thinking of his poem ‘How to Listen to Birds’, with its terrific, and suggestive, ending:

It modifies the whole

Machine of being: this

(Neither is my poem, I'd like to hint.) I have written about Middleton a number of times on this blog, and off it too, and this link will take you to one of those with spiders’ web links to other posts: Pages: Christopher Middleton (1926-2015) i.m. (robertsheppard.blogspot.com). Here’s my take on his poetics, on ‘measuring experience’: Pages: Robert Sheppard: Inaugural Lecture PART 2: Measuring Experience (on Christopher Middleton).

‘British Standards’ is best described here:Pages: Transpositions of Hartley Coleridge: the end of British Standards (and of The English Strain project) (robertsheppard.blogspot.com)  where you will find links to other magazine appearances of parts of the unpublished 'book'. I transpose sonnets by Wordsworth, Coleridge, Mary Robinson, Shelley, Keats and others, as well as Clare. Posted by Robert Sheppard at 2:49 pm

You may now read my reflective essay on the Ern Malley ‘affair’, or rather on ‘our’ re-enactment of it in Liverpool in 2018, which I originally wrote about here: 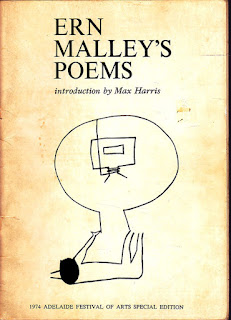 The new essay appears on International Times, and I thank Rupert Loydell (as so often) for selecting this piece, choosing some suitable illustrations, and for IT for following through with publication. It's called

Doubly Stolen Fire in his Prosthetic Voice: The Ern Malley Hoax and Fictional Poems in Liverpool:

Although I say it is on the Ern Malley affair, it doesn’t describe that (it’s an oft and well told story, which I summarise in a paragraph, but there’s loads online about it). It’s more a reflection on the nature of hoaxes, as carried out in this case, and as theorized by Charles Bernstein, AND a reflection on the difference between a hoax and a fictional poet. Of course, I’m thinking of my own use of fictional poets, and I refer to that. (Consult these webpages: Rene Van Valckenborch and the European Union of Imaginary Poets - Robert Sheppard (weebly.com) and European Union of Imaginary Authors (EUOIA) - Home (weebly.com)).

This essay comes from an assembling collection on the subject of authorship and ‘fictional poets’ and their mysterious hold (rather than hoax poets, with their sticky tricks to fit you up and empty you out). As Gerald Bruns says (and I’ve quoted this often): ‘A fictional poem would be a poem held in place less by literary history than by one of the categories that the logical world keeps in supply: conceptual models, possible worlds, speculative systems, hypothetical constructions in all their infinite variation.’

I hope you enjoy this brief take on the issue. Then you may read my other, later, reflections, which I have serialised on this blog, beginning, here:  https://robertsheppard.blogspot.com/2021/10/a-fictional-poets-notebook-entry.html, with a second series here: Pages: Reflections on Fictional Poetry and Fictional Poets (1 and hubpost for the sequence) (robertsheppard.blogspot.com).

The fruits of my ‘fictional poet’ explorations are published as A Translated Man and Twitters for a Lark, both accessible here: Sheppard, Robert (shearsman.com) (along with other projects).

In that second book there appears a poem by 'Robert Sheppard' which supplies the title of my essay. It may be read in the book, of course, but is also available here:  'Robert Sheppard - Spring 15 (blazevox.org)
Posted by Robert Sheppard at 11:42 am