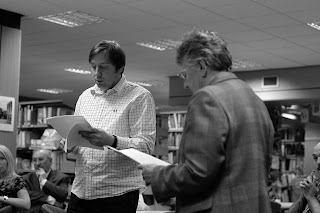 
This fifth series of Pages is dedicated to ‘poetry and the difficult thinking that surrounds poetry’ (Badiou) that comes from a group I coordinate at Edge Hill University: the Poetry and Poetics Research Group. We first met on 21 October 1999 and have been meeting, growing, contracting, branching out, ever since.

Our aim has been to discuss both our work and our poetics, sometimes connected with specific projects (several PhDs, finished and currently underway), and sometimes not. Several members have not been officially affiliated to the University, so we don’t see ourselves as an exclusively academic group. We have given readings together at the Rose Theatre at Edge Hill, at the Walker Gallery in Liverpool and at the Tate Gallery (the last two being under the auspices of member Alice Lenkiewicz’ Neon Highway imprint. We have published alongside one another (chiefly in Emergency Rations, an A4 pamphlet from Peggy’s Blue Skylight). We have recorded a CD (Points of Reference, copies still available £4). Many of us published in the People’s Poet special Edge Hill edition. As individuals, of course, the group has been active in many fields and I will leave it to members to introduce themselves in the subsequent Pages. They are, Cliff Yates, Andrew Taylor, Alice Lenkiewicz, Scott Thurston, Neil Addison, Dee McMahon (Click onto February 2005 for some of her work), Matt Fallaize, Daniele Pantano, Steve Van Hagen, Michael Egan, Colin Harris, Patricia Farrell, Angela Keaton, Tony Cullen and myself.

I notice John Seed wrote the following on his page for Shearsman: ‘In 1983 he moved to London and has taught History at Roehampton University since. Here for several years he was lucky enough to have Allen Fisher as a colleague. He was also lucky enough to find in the mid-80s, moving through the shabby upstairs rooms of various West End London pubs, the Subvoicive readings—and to be part of a discussion group which met for several years at the Tooting house of Robert Sheppard and Patricia Farrell.’ That discussion group was actually the blueprint for the current Edge Hill group, but this has developed into a different form.

GOING PUBLIC
This year is the tenth anniversary of the Edge Hill University Poetry and Poetics Research Group. There are plans for a series of events to mark this occasion during autumn 2009.

There are three founder members still active in the group – Robert Sheppard, Cliff Yates and Andrew Taylor. Cliff has a book forthcoming from Salt, Frank Freeman’s Dancing School, which will be launched at the Rose Theatre on Wednesday 11th November. The support will come from other members of the Poedtry and Poetics Research Group.

There will be a series of ‘open meetings’ where members of the group will discuss their poetics. A former member of the group, Scott Thurston, will also hold an open meeting.

Pages will be featuring work from members past and present. There will also be a special edition of erbacce (eds. Alan Corkish and Andrew Taylor) featuring members and former members, alongside an interview with Robert Sheppard in his capacity as chairman of the group.

There will also be an event to mark the publication of Troubles Swapped for Something Fresh: Manifestos and Unmanifestos, ed. Rupert Loydell, (Salt) which features poetics by Robert Sheppard, Cliff Yates, Scott Thurston and Andrew Taylor alongside others such as Jackson Mac Low, Sheila E. Murphy, Ira Lightman and Geoff Stevens.

To anticipate and accompany these events we will be posting work by the group and its associates between now and the end of the year.

We can be seen (some of us) in a group photograph taken by Peter Griffiths, while he was producing our CD: