Cianglini is a fictional poet I am writing on my own (unlike the others, such as Cristofol Subira or the Polish one whose name I've forgotten). That’s because she is one of the 5 fictional poets who actually appear in ATranslated Man. That’s also why she has a page here on the EUOIA website.


Thanks for Nia Davies for this one. Read Cianglini’s Poem Five of & in the latest edition of Poetry Wales (which was on sale at the Bangor gig mentioned in the last post).

(The ampersand is on the wall over from the Cork Coffee Shop and is still there; I saw it a month ago.) 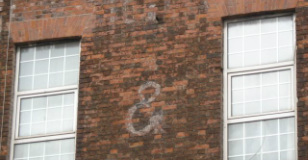 Here’s poem six – incomplete (and because it is 'incomplete', albeit fictionally, I doubt whether it could stand separate publication, unlike her Poem Five, which is powerfully present, structurally):


& the Downs Syndrome kid sets up in
scrapes the scribbles off the strings of his violin [del.] ‘fiddle’
& a man laughs in tears pointing in fathomless cruelty


& the beggar approaches us with a coffee cup of green twists
says ‘You seem like a nice lady!’ & I hold you closer
& a Korean slurps his way through porridge and Baileys [?]


& like the buried babies left by the vanished nuns [.] …


& my sister spouts anti [del.]-capitalist slogans so I sprout wings
she smiles that smug little academic one
& she jerks [?] in front of me until absorbed into the flow ‘of history’ [.{?}]


Posted by Robert Sheppard at 8:00 am