Bob Cobbing's ABC in SOUND: a new edition from Veer with an introduction by me 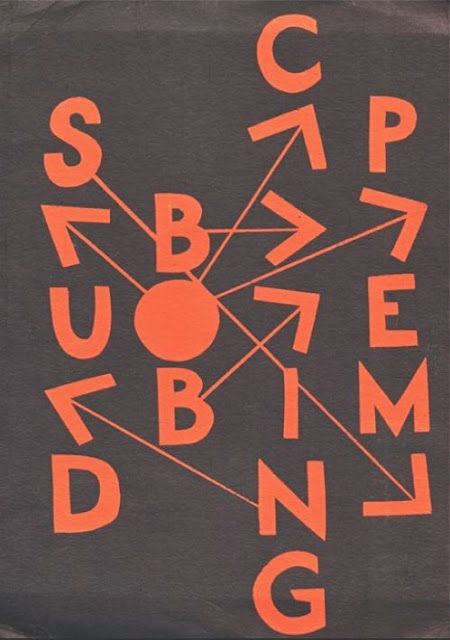 'This 8th edition of Bob Cobbing’s 1965 ground-breaking polylingual sonic abecedary unites Jennifer Pike Cobbing’s cover design for its original publication as Sound Poems with the typeset text of later printings and a new introduction by Robert Sheppard which investigates its character, pre-history and subsequent realisations in performance.' (Adrian Clarke)


Bob Cobbing’s ABC in Sound is the nearest thing we have in English to Kurt Schwitters’ Ur-Sonate (1923) which it resembles in being an extended, structured text, designed for sound poetry performance, although the mode of structuring is not musical, like Schwitters’ ‘sonata’, but fundamentally lexical, in being based upon the alphabet. As such it resembles various non-concrete alphabet poems (see, for example, Peter Mayer’s anthology Alphabetical and Letter Poems), but the alphabet is more often, though not exclusively, a cause of alliteration and consonance, less an occasion for semantic or logical ordering. Cris cheek calls it ‘a plurilingual abecedarian tour de force’.

My footnotes contain some web links which, of course, work better on this platform. They are
The present location of the BBC Radiophonic Workshop version of the ABC, and state is: ‘In the BBC Sound Archive on tape TRW 6373: “ABC in Sound: Alphabet Poetry (o o-Montage). 3 reels: 1: Makeup; 2: Premaster: 3: Sono-Montage. Completed programme inserts (master).”, although it exists in several archives of electro-acoustic music. (from
http://wiki.delia-derbyshire.net/wiki/An_ABC_in_Sound. (accessed 5th October 2014)


Cobbing's extended performance called ‘Variations on a Theme of Tan’ (and other works) may be heard at http://www.ubu.com/sound/cobbing.html (accessed 5th October 2014)


A group reading of the ABC at The Other Room, in 2012 may be accessed at http://vimeo.com/52068018.
Four individual performances of the ABC by Jennifer Cobbing made in 2013 may be seen at these sites: https://www.youtube.com/watch?v=s_qI7btPNAU;

I write about the Third ABC in Sound here:
http://robertsheppard.blogspot.co.uk/2005/03/robert-sheppard-bob-cobbing-two.html

and about the recent symposium on Cobbing's work here:

My book from Veer, Unfinish, may be accessed here.
Posted by Robert Sheppard at 8:00 am