Robert Sheppard: Bobliography: Make Perhaps This Out Sense of Can You: symposium on Bob Cobbing (set list)

Bob Cobbing (1920-2002) was a sound, concrete and visual poet, best known
for his performed works in which language was anarchically stretched through
shouts and hisses, interspersed between more recognisable tracts of spoken
word. He was also a prolific organiser and collaborator: one of the founders of
the London Filmmakers Co-op in the 1960s, manager of Better Books from
1965-7, and his imprint Writers Forum was amongst the first in the UK to
publish works by John Cage and Allen Ginsberg. 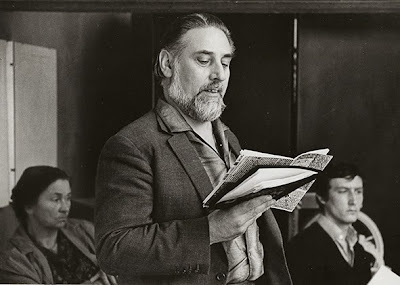 Make Perhaps This Out Sense of Can You contextualised Cobbing’s work as
a concrete poet as well as looking at his legacy as an organiser. What was surprising was the number of people there (130), mostly young and mostly none who knew or saw Cobbing. Although there was an emphasis upon Bob as a maker of images and maker of performances, there was less a sense of him as the maker of books (that the work wasn't art or music, but was literary). Paula Claire called Bob's texts 'triggers' rather than 'scores' and this distinction, made the night before, was referrred back to by a number of speakers. But the interest was encouraging. One fellow ex-Writers Forumite commented, 'Who would have thought this would happen?' (I like to think I would have.) It was good to meet academics like Fiona Becket who is coming back to this material, as is the wonderful Stephen Willey, and Rozemin Keshvani (the 'historian' of Better Books; see here), as well as muscians Hugh Metcalfe, whom I have not seen for years, and David Toop, who I met at Phil Davenport's pioneering Cobbing exhibition in Bury in 2005 (see a little-read post on that here), as well as Rosie Cooper and William Cobbing. Tim Fletcher who recorded late Bob; a man called Mark who has interesting plans, and the young man who liked my homage poems to Cobbing and who came to Bob's work through a secondhand LP!

I orginally called my piece (which I conceived and delivered as a performance):

We are both: a collage of writings about and for Bob Cobbing: autrebiography,
unwritings, poems, critical articles, stuff.

Then I called it 'Bits and Bobs'. Finally I entitled it BOBLIOGRAPHY.

I read pages, complete, from top to bottom of the prose, but the poems complete:

A: The Poetry of Saying p. 228
B: Far Language p. 61(includes my account of meeting Bob; reprinted here. Here's another account of my first encounter.)
C: poem: 'Codes and Diodes are both Odes':


D; from the Introduction to the Veer edition of ABC in Sound (newly published: buy here) p. 1 (a small fragment of it and more information and links here).
E: poem: The Magnetic Letter
F: ABC p. 2
G: Time Out for Words Out of Time Outtake for Bob Cobbing: (from my new book Words Out of Time):

I don’t remember writing to Bob Cobbing. I don’t remember that Bob Cobbing still wore knitted ties. I don’t remember Jeff Nuttall saying, ‘This place is death!’ as we cabbed it through Norwich. I don’t remember that William Empson had wind. Who is the American expert who predicts peace at least until 1985? Can he have guessed that Phil Minton would one day work with Bob Cobbing? Groundhogs ticket in his pocket: Cobbing plays him ‘e’. Exchange employment between time, shadowgraph, black holes. Lol Coxhill watches them perform, back against wall, bald head shining, Hawaiian shirt loose over white trousers, bottle in hand. Looking over the shoulder of the Angel of History.

H: ABC p. 3
I: poem: Verse and Perverse are Both Verses
J: ABC p. 4
K: poem: The Micropathology of the Sign. Which was the introduction to Bob's 'Processual'. Read here.
L: The Poetry of Saying p. 227
M: page from 'The British Poetry Revival', ening mid-sentence...

(The poems are from my first collaboration with Cobbing, Codes and Diodes,1991; our second collaboration, Blatent Blather/Virulent Whoops of 2000-2001, may be read here.) And there's a video of its last outing with me playing myself and Patricia Farrell reading the parts of Cobbing: here.

Bio for the occasion:


Robert Sheppard has just published Words out of Time, his autrebiographies
in which Bob Cobbing's knitted ties and his 'E' poem appear, from Knives
Forks and Spoons. A Selected Poems is due later in the year. Sheppard met
Cobbing in 1973 and has written on his work, collaborated with him, and
attended the Writers Forum workshops up until Cobbing's death. He has
recently supplied an introduction to the new Veer edition of ABC in Sound.

CATALOGUE2014, film, 20 minutes
Moving our attention between the near and the far, seriousness and humor,
Jennifer Pike (93) recites ‘ABC in Sound’ (1964) by her late husband, Bob
Cobbing.
Fiona Becket
The Poetics of the Machine: the example of Bob Cobbing
Fiona's paper addressed Bob Cobbing’s commitment to the
‘poetics of the machine’, and the relationship between the limitations and possibilities
of the technology in the formation of the text and its performance. , with plans to take
the exhibition to the Chinese University of Hong Kong in 2017.
Karen di Franco
Karen Di Franco is an archivist and a curator, based at CHELSEA space,
Chelsea College of Arts.
Oscar Gaynor
Oscar Gaynor is a writer and artist currently studying Critical Writing in Art &
Design at the Royal College of Art. He reworked a text originally written in response to the Bob Cobbing exhibition staged at Chelsea Space in December 2014, that combines the
experiences and ramifications of working in the archives of the (neo-)avantgarde
with the sound and images pioneered by Cobbing. For the reading, he
was joined by Henrik Heinonen to interpret the text, an artist predominantly
using sound, studying at the Academy of Fine Arts, Helsinki. It was all about worms.
Will Holder
Typographer Will Holder organises writing around cultural objects. Holder is currently developing a protocol and interface for a collectively compiled catalogue of the Bob Cobbing archive. He read conceptual writing drawn from Cobbing's fight with the housing people at the GLC.
Holly Pester
Low Loom Bleep Bleep
A play on sound poetry and poor language expression, in which Holly performatively explored the work of sound poetics in the context of deskwork.
David Toop
David Toop is a musician, author, professor and Chair of Audio Culture and
Improvisation at London College of Communication. He has collaborated with artists ranging from John Latham, Bob Cobbing,Carlyle Reedy and Ivor Cutler to Rie Nakajima, Evan Parker, Max Eastley and Akio Suzuki. He palyed recordings of Abana and Bob.
Steve Willey
Poetry is not about death, dying only: the Event as a Mechanism of Survival in
the Work of Bob Cobbing. From Six Variations on Typestract One, made for the Destruction in Art
Symposium (1966), to the collaborative version of Chamber Music, produced
for the annual Swedish Text-sound festival in Stockholm (1968), events played an central role in directing and shaping Cobbing's poetic practice.

The symposium was organised by William Cobbing and Rosie Cooper.

William Cobbing
Starting from a sculptural sensibility William Cobbing’s artworks encompass a
diverse range of media, including video, installation and performance. Grandson.
Rosie Cooper
Rosie is Head of Programmes at Liverpool Biennial. She also has an independent curatorial practice, and with William Cobbing, she has co-curated a series of events, displays and publications titled Bob
Jubilé that examines the legacy of Bob Cobbing, through the family archive

The symposium coincided with the Raven Row event Bob Cobbiiiiiiiiing Live, an evening celebrating the work of Bob Cobbing, with highlight performances by Hannah Silva (brilliantly performing along to Bob's HANNAH pages from the ABC) and David Toop (and students) and Paula Claire (the Joyce Grenfell of Experimental Poetry). Hansjorg Mayer spoke, which was incredible. That was the night before. Wednesday 20 May, 6.30pm

Here is an early post on Cobbing's Third ABC and DANS.
Posted by Robert Sheppard at 8:48 am