Robert Sheppard: The Cambridge Companion to British Poetry, 1945-2010 (me, it, and a writing exercise)

As an antidote to the subject of this post, I was pleased to find myself mentioned in dispatches in a new critical volume, edited by critic (and passionate anti-Brixeteer, if you follow Twitter) Edward Larrissy, called The Cambridge Companion to British Poetry, 1945-2010, as a critic (The Poetry of Saying and When Bad Times Made for Good Poetry both get listed, and I'm quoted once, and as an editor (Floating Capital: New Poets from London) but also as the Main Thing, as a Poet. (Capitals mine.) Simon Perril, in his compressed piece ‘High Late-Modernists or Postmodernists? Vanguard and Linguistically Innovative British Poetries since 1960’, mentions both Twentieth Century Blues in terms of the problems of the long poem (a whole paragraph), and Warrant Error (at last) is listed with other works that deal with the Gulf and Terror wars and he concludes that ‘it is a little observed fact that British vanguard poetry since the eighties has offered some of the most insightful and adventurous war poetry’… Thanks Simon. (Read about his creative work here.) 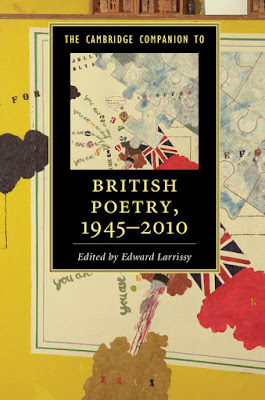 Sweeping the index I found no references to Lee Harwood, which was saddening and Bob Cobbing only gets one mention as bookseller and publisher. But otherwise, the coverage looks wide. As I said, it’s a new book, and it’s only just arrived. But by the evening I'd read half of it. Some great chapters, although Cornelia Gräbner's piece on performance is the one in which Cobbing gets not much of a mention even though he is absolutely crucial to the development of performance and sound poetries (no ABC in Sound!) (despite there being a list of later women poets, like Maggie O'Sullivan, who directly worked with Writers Forum - note no apostrophe). There was no cultural mandarin called Brian Mills. The critic means Barry Miles - and Dave Cunliffe's Poetmeat (I thought Tina Morris was also involved) hailed from Blackburn, not Blackpool... (See Geraldine Monk's Cusp, which Simon mentions.) These are localised irritations in an otherwise great book.

See my takes on Cobbing here and the British Poetry Revival here.

Even though he'd declared himself the Scott Walker of criticism, the Greta Garbo of reading, the Howard Hughes of literary theory, he couldn't believe his eyes. Barry Miles - the 1960s hustler and diarist - had become Brian Mills in this account of the Indica Bookshop, Dave Cunliffe's Blackburn had become Blackpool, and Bob Cobbing merely ran a press whose name had acquired an apostrophe that had been typographically dispensed with in its earliest years.

He threw the book down. (Actually he didn't; he placed it down gently. There were more precious pages than these in it.)

How many other mistakes did the chapter contain? To not realise the role of Cobbing in 'performance', the ostensive subject, was more than the carelessness suggested by the first two errors - this was a woman who couldn't read her own handwritten notes was his most generous construction of the disaster - it was a dereliction of the duty of the critic.

Had he never made such errors?

He had, but never so egregiously, he hoped, and he'd always noticed in time. 'The role of the critic is a holy office at the altar of books,' he found himself writing on his blog, poking 'Update' with more force than he'd intended.

Come on, he didn't believe that, surely? In fact, seeing his own book, The Forms of Meaning, through the press (somewhere he feared there was a de Bollas' he skimmed doing the index that he couldn't remember correcting in the proofs), he realised that this was the last book of literary criticism he intended to write (excluding collections of fugitive pieces and blog-posts). It was the last book with a thesis and theme. Walker, Garbo, Hughes.
Posted by Robert Sheppard at 8:00 am