Sweden’s Kajsa Bergström (1956-), co-created with SJ Fowler, a Nordic man himself, is one of the finest of modern, modest Northern European poets. Born into a gentrified family in Ornskoldsvik, she is one of the last to follow the ecstatic revolution in Scandinavian literature, after the likes of Ibsen, Hamsun, Garborg and Strindberg, and on then from Ekelöf, Martinson, Tranströmer. The outpouring of reflective, burdened personal emotion, of self-analysis, of the destructive power of civilised discourse, marks out the early poetry, as though she were living the works of those who had come before her. Bergstrom is indelibly marked by her father’s death while she was a child. Her mother, a member of the petty nobility, still retained the Bergmanesque protestant hardness of her forebears, and seems to have been indifferent to her daughter and, as had happened with Schopenhauer, this emotional isolation surrounded by wealth produced a superlative gift for the imagination for the young poet. Like Schopenhauer too, this became directed toward the Oriental, the Eastern mode, in her turning away from Christianity and European parochialism.

After brief periods studying in London and Uppsala, Bergstrom became a student of music in Paris and became familiar with the work of the Tel Quel group. She forever maintained their influence on her was limited. Her first collection Flak (1977) was not received with any particular fanfare. She described its writing as suicidal, a process of poetry amidst emotional upheaval, and indeed her use of cryptic linguistic constructions, etymological tracings, repetitions, seems to hark to the best of European experimental movements and yet, almost by design, seem utterly impersonal, impenetrable to the reader.
As her work transformed, she returned to Stockholm, and her esoteric embracing of the poetic medium began to become tempered by more direct images in the text work that appeared to be increasingly offset by the remarkable use of typography, as though she were literally breaking apart the limitations of the Swedish language to express direct thoughts and images. The high experimentation left its trace in her use of materials and the ever present relentlessness of her images. By the time of Songbook (1996) and Noli Me Tangere (2005), when she had moved to Malmø, her oscillation between obtuse mysticism and deeply personal intellectualism had won her great acclaim. She can't help any of this, but she still says Don't Leave the EU or the EUOIA. 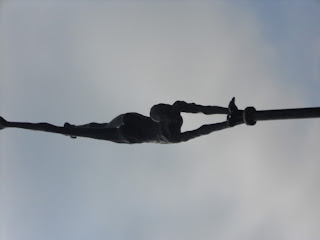 SJ Fowler has his own EUOIA post here. And here is a list of all 28 poets and links to biographies and poems.
Posted by Robert Sheppard at 8:00 am