Robert Sheppard: The History of the Other, part seven 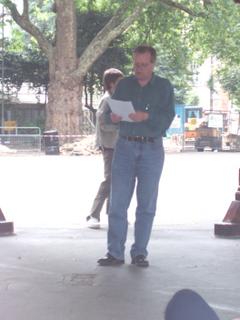 
Iain Sinclair’s anthology Conductors of Chaos (referred to as CC in the text) which I talked about last month, also reflects the growth of a specific ‘performance writing’. Not to be confused with the populist performance poetry to be found in most cities and towns (a distant descendent of the British Beats of the 1960s), this emergent practice developed out of the performance contexts of British poetry in the 1970s and 1980s analysed above. It found a temporary institutional home at Dartington College of the Arts, in Devon. Aaron Williamson, for a while a research fellow there, was witnessed in performance by Susan de Muth of the Independent in 1995:

When he bursts through the glass doors, it is like an explosion of noise. People step back, tread on each others’ toes, stumble; we’re assaulted by the violent cacophony of his roaring, screaming, jibbering, weeping and moaning.

Indeed ‘Cacophonies’ is the title of one sequence excerpted in Conductors Of Chaos. The poems are exacting explorations of the condition of profound deafness.

Stamping so that the floorboards resound, Williamson strikes a balletic pose and suddenly, from the echoes of this aural anarchy, brings forth a serene and lucid stream of poetry. The feedback from his wayward hearing aid produces an eerie accompaniment which could be the music of the spheres. Some people cry. The experience is overwhelming.

When Williamson says, ‘The words themselves, the modes of saying, are as significant as meaning,’ he is opening up his practice to ‘a more physical currency of accord’ that would try to avoid thematizing the text by re-casting it in a more performative mode. On the page the ‘Cacophony’ is a text of misheard ‘confused loads’, of corrections (‘yes that one’), and the existentially chilling, ‘you’ve lost me’ of the deaf. (CC, pp. 481-82) The text stutters, tongue-tied, breaks up language, lards the interstices between words with other words, word-parts and anagram, uses enjambement to prise open lexical items and suggests performance in its notation, in a manner reminiscent of Maggie O’Sullivan’s work. (Note: this should be centre-margined.)

The nature of identity, of the ‘U’, and the ‘participating hazards’ of identifying with a centre that seems defined by laws rather than roles and lores is contrasted to the ‘everywidewhere’ of elsewhere. Between these extremes, the facts, like the text in performance, tussles.
The similarly centred lines of ‘Stranger’ by cris cheek look so fixed upon the pages of Conductors of Chaos, that it is a surprise to hear performance variations on his own Skin Upon Skin studio CD, also released in 1996. Indeed one can hear the process of word transformation, as ‘tactic’ becomes ‘tic tac’ in the passage below, and one can then see how ‘stranger’ became ‘stringer’ in the printed text. Oral improvisation, transcription, computer screen design, and subsequent performance, are the acknowledged stages of creation. Yet it is also a meditation upon estrangement and alienation, focussing at times on the island of Madagascar, sometimes on its own processes and orderings. The recasting of Felicia Hemans’ famous lines of maritime catastrophe is only one of the most obvious verbal transformations, one which introduces the theme of nomadic movement:

The toy stood on the turning Wreck
Of climax and Closure.
To distract from a diversionary

Because to sequence the modern and get it ‘right’ in that
Sequence is not Necessarily order, right?

To distract from a diversionary modern tic tac
Or there isn’t time for letters and you can’t afford to phone – country road
- Going home. (CC, p.35)

(This text is centre-margined in the original.) Vocal techniques – breathing and throat sounds (reminiscent of the sound poetry of Henri Chopin), half-singing, full song (as in the lines from a country song above) – are heard against an intermittent chant and violin drone. The intonation patterns are not those of ordinary speech. Such effects are improvised from the text (or some variant) and range between the mimetic (the quoted song) and the random (sudden dips of tone or squeaky falsettos). The ‘text’ is also its performance and its subsequent transformations. The risk is that it might be performed or re-inscribed in less, as well as more, interesting ways, that climax and closure might not become integrated. But the text itself poses a question that (given its serial transformation) is oddly rhetorical among such transitions. (Again, this should be centre-margined.)


If we equate arrest with the Levinasian said and movement with the saying, which is in effect the argument of my The Poetry of Saying, this poetry opts for the constant promise of re-invention imposed by the transformations. But the poetry of moving must embrace the arrest (which is only a rest) in the material text upon the page, and even as sound traces on the CD.
Caroline Bergvall delivered a keynote paper at a 1996 conference concerning performance, at Dartington College, when she was the director of the performance writing programme. The questions she asks about the ‘concerted excavation of the intradisciplinarity of much textual work’ push the possible boundaries of what might be considered performance beyond the two examples above:

This is a stance that acknowledges that writing itself is performance, which is at once liberating and limiting for the question remains: what will not be performance? If everything is, what value and specificity can the category have? To include under this rubric, writing ‘activated for and through a stage, for and through a site, a time-frame, a performer’s body, the body of a voice or the body of a page’ authorizes experimentation in dozens of ways out from writing, but simultaneously directs attention to a kind of total artifice that emphasizes the materiality of any aspect of language and its propagation, since

everything about a piece of work is active and carries meaning. Any treatment, any font, any blank, any punctuation, any intonation, any choice of materials, any blob, however seemingly peripheral to the work, is part of the work, carries it, opens it up, closes it in, determines it.

Williamson, cheek and Bergvall herself have explored performing with musicians and dancers, but also have investigated site-specific installation work, and cheek has been exploring hybrid forms of writing. Brian Catling, for example, is also a sculptor, performer and book artist.
Sinclair’s anthology showcases Bergvall’s splendidly funny, typographically extravagant, post-porn (‘leg over’) (CC, p. 6) piece for two ‘kissers’: (‘come legs over legs suck armpits with tongue/come legs over neck press belly on butt’) (CC, p.7 ). The accompanying marginal gloss reads: ‘on remembering one's past suddenly’. (CC, p. 7) It is this bodily memory of sexual experience that informs what Drew Milne has called her ‘queer poetics’. The text (it is not easy to see what performance would unravel from the page) ends:

muscle-constructions do the archaeology of sex in one hundred and twenty situations [the text is entitled In Situ] and ah ah where you have just come from disperses in the growing background: so I’ll ask you once again what do you remember of what you know. (CC, p. 10)

Next month, a feature on the fate of women poets in the British Poetry Revival and Linguistically Innovative Poetry in Britain. For more of this history please see my The Poetry of Saying, advertised on Page 478.