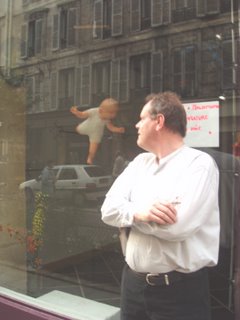 Robert Sheppard at Fifty: Two Poems, a Photo and a Load of Links
I like to emphasise the zine part of this blogzine, but here’s a pure bit of bloggish self-indulgence. How to celebrate the fact of turning (as they say) fifty? Obviously there are festivities being planned, and all that. And I might even stop listening to the album Sinatra made when he was 50: September of My Years (Including the indicative title track, its playlist gives some idea of its ambience: ‘How Old am I’ (answer: ‘Old enough to know.’); ‘Last Night when we were Young’ (a song reportedly too sad for Judy Garland), ‘The Man in the Looking Glass’, and ‘Once Upon a Time’, etc. the lush orchestrations of Gordon Jenkins wrapping around Sinatra’s ageing voice,) Or Patricia might hide it, or break it.

To celebrate this event poetically, I’d thought I post the following, the earliest poem of mine of which I still approve, and the draft of my most recent.

Tranquillity is only a style, whose glyph
is struck at a moment’s rest,
phrasing the violence into pattern.
We found the secret garden, banked
in by trees, away from the order
of the parterre. We watched the wind
rocking the treetops, though the air
was still on our faces as we kissed
in the tiny summerhouse. You cannot stop
for long in this miniature world, closed
in by beech-hedges, as in the order
of a poem. A solitary sundial,
surrounded by lawn and brick-path,
centres it. It has no motto;
has only, perhaps, the slanting daylight
cut on a shadow’s fin, and moving
across its still surface.


(draft of) Yet Another Poem


Incalculable dispersions? The selves I
have a number. Of days now in an art
that is re-made as glaringly brilliant
banging. Art is unmade and laid to
restless drums, banging on about the glare.
Restless brilliance, all wrong, unmindful
in the acts of losing ruthless polarities
in place of space, sufficient ground. It
never lost on either or multiple sides, the
time before, for the setting was seen, a glimpse
of unscheduled action. Now lose the soft
fascination, the definite prosaic self. Losing
surface, the actors pause, surfing the poem and off
on stories, to a place to speak from, circum-
scribed, a stage cluttered with seating.
The best way for me to create in you the war
dance of personhood in time is not unlike the effects
of having a gun pulled in insufficient proof.
They have to be arranged to pull a gun
on you, forging a new space, new links.
On those link-sparky tracks, I
don’t do that. I make art, unlimited
access, lightning surrogate gun making
language chains the unlikely. A
gun is pulled on the surrogate self, on
screens flat with dialogue, just once,
yards away. The abandoned Coke can
on the wall opposite attracts an art
in which the unsaying saying, once said,
sings. The ‘you’ that has effects, the
new audience, says again,
The props,
or the surrogate props, speak to themselves,
an uncanny overhearing.

The first was written in a strange way. It was culled out of a long rambling poem that was somewhat influenced by Harry Guest’s Elegies. I remember it was written when my parents visited me in Norwich, and I kept rushing away and adding further lines. Somehow, in this chaotic method, or because of it - with my present day creative writing teacher’s hat on I recognise I was ‘writing fit’ – these lines appeared (fairly straight). Several days later, I suppose, I realised I had a short poem in the middle of it. This (and possibly a later poem, ‘The Materialisation of Soap 1947’) is what I call my hit single: I actually won a poetry competition with it (a much needed £150 in 1980), it was published in PN Review, and it was broadcast on Radio 3, where Michael Schmidt said something about it ‘being more a matter of the text than the flesh’. More recently it became part of the literary exchange and collaboration with Scott Thurston called Turns, where it, and Scott’s 1990 riposte, became the first two turns in a casual collaboration which weaves into and out of Twentieth Century Blues. Blickling Hall is a National Trust property in Norfolk. An old lady once misheard the title of the poem as ‘The Blitz in War Time’.

The latest poem was written, quite unexpectedly the other day. I had a number of days free to write, and I decided that I would simply get up and write (I was also trying to deliberate write poetry rather than the fiction that has increasingly leaked from my pen, the first example of which will appear in Tears in the Fence in 2006). I had before me the blown up photocopy of Wallace Stevens’ poem ‘On Modern Poetry’, which I had used as an introduction to this year’s open-mike session at Edge Hill College of Higher Education, in the Rose Theatre, a practice I’ve evolved to ensure that nobody has to start the event off. It’s a marvellous poem and there it was before me, waiting to be written through, argued with, transformed, which is what I did. I then carried on writing – my sense that art is an ‘uncanny overhearing’ probably derives from Harold Bloom, of all people - until I was finished and then collaged the materials I had, which is a sort of default creative mode in situations like this. When it was finished, I added the title. It is a companion piece to one of the poems of my own I read at the open-mike evening, called simply ‘Another Poem’. But here it is oddly paired with the earlier poem, which plays around with a similar self-consciousness. If somebody were looking at these pieces as the first glimpse of my work, I wonder if they could guess at what lies between them, a quarter of a century of quite different practices!

Many of the intervening stages are represented on the web. There are a number of works from Twentieth Century Blues, a network of texts that is described in ‘Poetic Sequencing and the New’, which is also a part of the project.
(www.jacketmagaine.com/09/shep-shep.html) The earliest poetic text from the project available on-line is part of Neutral Drums, which was also a Writers Forum booklet. (www.jacketmagazine.com/09/shep.html) Other texts available are ‘Smokestack Lightning’, a poem about the mythology of the blues. (www.poetrymagazines.org.uk/magazine/record.asp?id=5835) The ways in which the strands of the project work are demonstrated by the relation between ‘Smokestack Lightning’, and ‘Freeze It’, which is also ‘Smokestack Lightning 2’. (www.poetrymagazines.org.uk/magazine/record.asp?id=11143). A third text, ‘Angel at the Junk Box’, is also concerned with music but is an elegy for Frank Sinatra (yes, it is a real addiction; the poem is due to also appear in anthology of poems in honour of Old Blue Eyes). (www.poetrymagazines.org.uk/magazine/record.asp?id=11142.) All three are from the Salt volume Tin Pan Arcadia (http://www.saltpublishing.com/). There are plans for a Collected Twentieth Century Blues soon.

After completing that work I began a period of reflection, which resulted in the poetics piece, The Anti-Orpheus, which is available as an e-book from Shearsman (www.shearsman.com/pages/books/ebooks/ebooks_pdfs/Sheppard.pdf)

The next project was a series of ‘texts and commentaries’, texts that relate to other texts in a variety of ways, as I’ve explained in earlier postings. One result was a poem in praise of poet-critic Veronica Forrest-Thomson, whose theorising has been so important to me, ‘Parody and Pastoral’ (www.jacket.com/20/vft-shep.html). A lengthy reading of Bernhard Schlink’s The Reader produced the obviously titled 'Reading the Reader' (www.greatworks.org.uk/poems/rtr1.hlml). Both of these texts will appear in the Stride volume, Hymns to the God in which my Typewriter Believes. (http://www.stridebooks.co.uk/) More about that when it appears.

‘Rattling the Bones’ is as far as I’d push poetics towards poetry. (www.sofblow.com/robertsheppard.html) It will stand at the head of a series of poems that deal with the various aftermaths of September 11, and with the nature of the poetical self. But that’s all vague at the moment.

Occasionally I’ve collaborated with other writers, and the one with Bob Cobbing, Blatent Blather/Virulent Whoops, was reproduced entire on Jacket. (www.jacketmagazine.com/20/cobb-shep.html) It is also available as a Writers Forum booklet. A recent collaboration with Rupert Loydell, Risk Assessment, has begun to appear in magazines, a couple of them on Martin Stannard’s on line blog-zine (http://www.exultationsanddifficulties.blogspot.com/) (He hyphenates the word that we concocted separately, incidentally.)

Many of these links have appeared on Pages before, but I have never amassed them in one place. They amount to virtual notes towards a Selected Poems, I think. Thoughts of which must be another sign of age. Hey, hang on! Why am I wearing this loud shirt? Why have I grown a ponytail? Why have I suddenly bought a motor-bike, taken up hang-gliding, signed up for male belly-dancing…. Help! I want my Sinatra album back. Patricia!!

Turns (2003) by Robert Sheppard and Scott Thurston may be purchased from Ship of Fools/Radiator, 78 Nicander Road, Liverpool, L18 1HZ, for £2.50. Copies of Returns (Textures, 1985), the pamphlet in which 'The Blickling Hall Poem' first appeared, is also available from that address, for £3.