Scott Thurston at the Poetry and Poetics Research Group 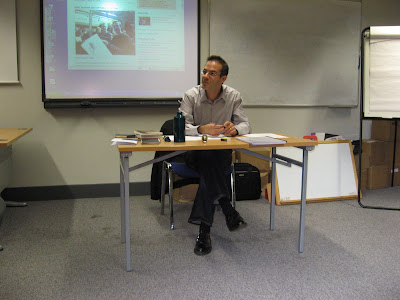 At Edge Hill last night, Scott Thurston launched our series of talks with a glimpse of the working processes behind Internal Rhyme, his book-length sequence of poems which can be read horizontally as well as vertically. After reading some of these poems (some in both ways) there followed a general discussion of this method, questioning how and why the poems manipulate temporal and spatial relations, or whether there is an assumed simultaneity in the method. The Journal of British and Irish Innovative Poetry enjoyed its first launch, the special edition of Erbacce featuring work by Scott and members of the group was launched, and many group publications were on sale.

Posted by Robert Sheppard at 1:34 pm