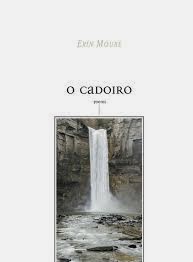 I am writing about the forms of translation and the translation of forms (to coin a phrase I could well adopt to describe what is going on in various works. The next up is Erín Moure’s O Cadoiro (2007), a book which explores the (literal) archive of the Galician-Portuguese troubadours, important for Moure for the reason that they were secular, and whose discourse was that of one person talking to another, or better: whose artifice was that of one person talking to another, for she constantly emphasises the formal. (See the ‘postface’ to the book which appears not at the end of the book but online,here.)

I bought my copy of the book when Moure read at Edge Hill University where I work, on Thursday 25th October 2007, a reading I organised for her as part of the series that has been running since 1998. My diary states: ‘Waited in the afternoon, for Erin Moure. She arrived and we talked translation, poetry, peanut allergy … and stuff, before the event began…. Moure was as fantastic as Lee {Harwood, I assume} said she was. Marvellously gliding between languages and with so many fresh ideas, that don’t owe to language poetry.’

‘Marvellously gliding between languages,’ I wrote, before I’d come across her word ‘transelation’ or had read the purchased books, of course. (Why I thought she’d ‘owe’ to language poetry I don’t know. I had been reading, or perhaps mis-reading, her work in the days before the reading, but probably only excerpts on-line.)

So now I am back admiring this work but a little hesitant before it. I’ve written an introduction which spells out the attitude to the project expressed in the ‘postface’, but the poems remain with their ‘frequency of lyric resistance’ as Simon Perril says of them in his Archilocus on the Moon (one of the next books I shall tackle).

Rob McLennan’s blog (here) has a post about the book (here), in which he describes it as ‘translating Galician-Portuguese into an argument about authorship’. That’s an interesting phrase and a description of the book that preserves the expanded sense of translation I’ve been taking on (The PetrarchBoys, Bergvall, see recent posts on this blog) that allows the term to stand for any transformative process. Thus poetry becomes an argument, but the argument of an aesthetic form like lyric (and Moure has no trouble with a term like lyric) cannot be established in syllogisms. If form is cognitive, if literary works embody knowledge, they do so in ways far distant from the knowledge of propositional knowledge, much closer to a Heideggerean notion of disclosed, unfolding, thought (though I can hear the armbands being tightened across the biceps as I admit as much, and it’s not a group of hypochondriacs checking their blood pressure). As Robert Kaufman argue

Lyric’s special formal intensity … arises from lyric’s historically constitutive need to stretch in semblance, via its musicality, the very medium of “objective” conceptual thought, language – to stretch language quasiconceptually, mimetically, all the way toward affect and song but without relinquishing any of the rigor and complexity of conceptual intellection, so that in a semblance-character vital to the possibility of critical agency, speech can appear as song and song can legitimately seem to be logical, purposeful speech-act’. (Modernist Cultures: 212)

If we amend McLennan’s phrase and typify Moure’s book as ‘translating Galician-Portuguese lyric into an argument about authorship’ we may see how ‘Lyric songfully stretches the linguistic medium of conceptuality’ into its own formally cognitive saying. (MC 216) (See my book The Poetry of Saying for the full implications of that term ‘saying’ in the way I use it here.) Lyric doesn’t speak conceptual language, but sings it, and in thus doing so, severs its links to conceptuality while seeming to use its language. McLennan comments:

There is an interesting way that Mouré uses the language, weaving a kind of lightness and wide range of worked speech, even while incorporating the weight of theorists such as Foucault, Agamben, Lacan and others, without letting the weight take over. How do the poems not collapse from such theoretical weight? How does the theory not simply get in the way of the poetry? How does the weight not take over?
Scattering her work with quotations from Foucault, Derrida, Agamben (in various languages, not always the original language if not in English translation) oddly does not infuse the work with conceptuality, ‘weight’ in McLennan’s formulation. The lyrics abutted to the quotations symbiotically entune them, as it were, release them into the status of poetry itself, ‘to make thought sing and to make song think’, in Kaufman’s words again. (MC 212) This can be achieved by page space and type face but this is no more obvious way than in the beautiful photographic pages in ‘Befallen’ which present supposed translations with strips of text woven across them, one per poem, which is a literal materiality that matches the materiality of the archives of the cancioneiros themselves. Excerpts from another archive, as it were, are stitched across the Galician poems (or Moure’s deliberately fictional poems written out of them). The poems are thus interrupted by the prose texts, although it is possible to regard the interruption as being the other way round. The poems interrupt the strips of prose writing. (It will depend in which you are reading at any given moment.) 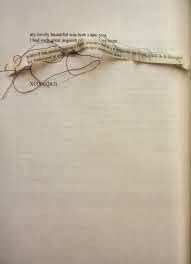 The text (at least in the case I will examine) is Derrida’s essay ‘Archive Fever’, delivered at the Freud Museum in London, in 1994, which considers Freud’s work as an archaeologist of the unconscious, an archivist of psychological data. He devises the term ‘archive fever’, on a par perhaps with cabin fever, and diagnoses this condition:

It is to burn with a passion. It is never to rest, interminably, from searching for
the archive, right where it slips away. It is to run after the archive, even if there’s too much of it, right where something in it anarchives itself. It is to have a compulsive, repetitive, and nostalgic desire for the archive, an irrepressible desire to return to the origin, a homesickness, a nostalgia for the return to the most archaic place of absolute commencement. (Archive Fever 91)

In my honesty, and curve
of my ribs around such heart I have
or lung for breath, and alive
here, wanting world as she
to be in me (Moure 2007: 87)

Death is never far away in the tradition, as we have seen (‘Mourii’ itself sounds akin to death), and neither is the central concept of the fall:

A creased grave-shroud is my foreboding
A careen or fall, and would you want me ever
world, for it is world I feel such weight for.

Here careen (‘v.t. and v.i, to turn over on the side, esp. for repairing or cleaning,’ or ‘n. a heeling position’ is equated with fall: toppled over for heeling, or to be worked on (the word suggests etymologically keel rather than heel, from Latin: carina, keel). Creased and careen echo. ‘Poisoned, delicate world. I love you still,’ the poem ends, balanced in address between lover and world. (Moure 2007: 87) The fall is a falling into the world, a falling in love ‘as she/ to be in me’, which points to and from the deleted Erín Moure to her other poetical analogues. Besides all the names of the troubadours, from Pero de Veer to the one female troubadour, María Balteira, through to yet another alter ego, again deleted, ‘Cálghaij M.’ whose signature carries the following note in small letters, ‘(for I cannot call her)’ where the word ‘call’ means both to hail and to name. (Moure 2007: 54)
Twisting and turning through these changes of name, persona, alter ego and/or heteronym, the poems themselves are the formal tracings of a refined version of ‘archive fever’: ‘It is never to rest, interminably, from searching for the archive, right where it slips away,’ as Derrida says (though Moure would have said falls away, I’m sure). 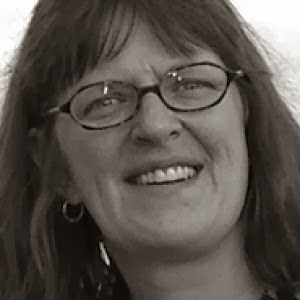 To see links to more extracts and excursions relating to my The Meaning of Form project, navigate here.

Posted by Robert Sheppard at 3:24 pm