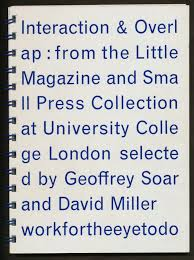 I am sad to have heard this morning officially of the death of Geoffrey Soar from his wife Valerie, though I had picked up the news in one of Lawrence Upton’s updates, and I find Ken Edwards has posted a remark on Facebook. He had been ill for some years.

Indefatigable supporters of radical poetry both, the Soars were often met at readings, events and parties (including ours) in 1990s London. Geoffrey had semi-retired, I think, then, from his post of librarian at the Little Magazine and Small Press Collection at University College London, a resource absolutely vital for tracing the history of innovative poetry in the Twentieth Century. He published and exhibited at least the following:

"Joyce and the Joyceans: an exhibition compiled by Geoffrey Soar and Richard Brown" (1982).

David Miller and Geoffrey Soar, Little Magazines and How They Got That Way, Exhibition Guide, 27 September-25 October 1990, Royal Festival Hall, London, draws on the Little Magazine Collection at University College, London, started by Soar and maintained by Miller.

Wolfgang Gőrtschacher, Little Magazine Profiles (Saltzburg: University of Saltzburg, 1993) is a full length study of the phenomenon of little magazines which owes to Geoffrey and features a full length interview with him.


Geoffrey was also a painter and Writers Forum will be publishing some work of his soon. Our thoughts are with Valerie.

More on the little presses here.
Posted by Robert Sheppard at 2:06 pm