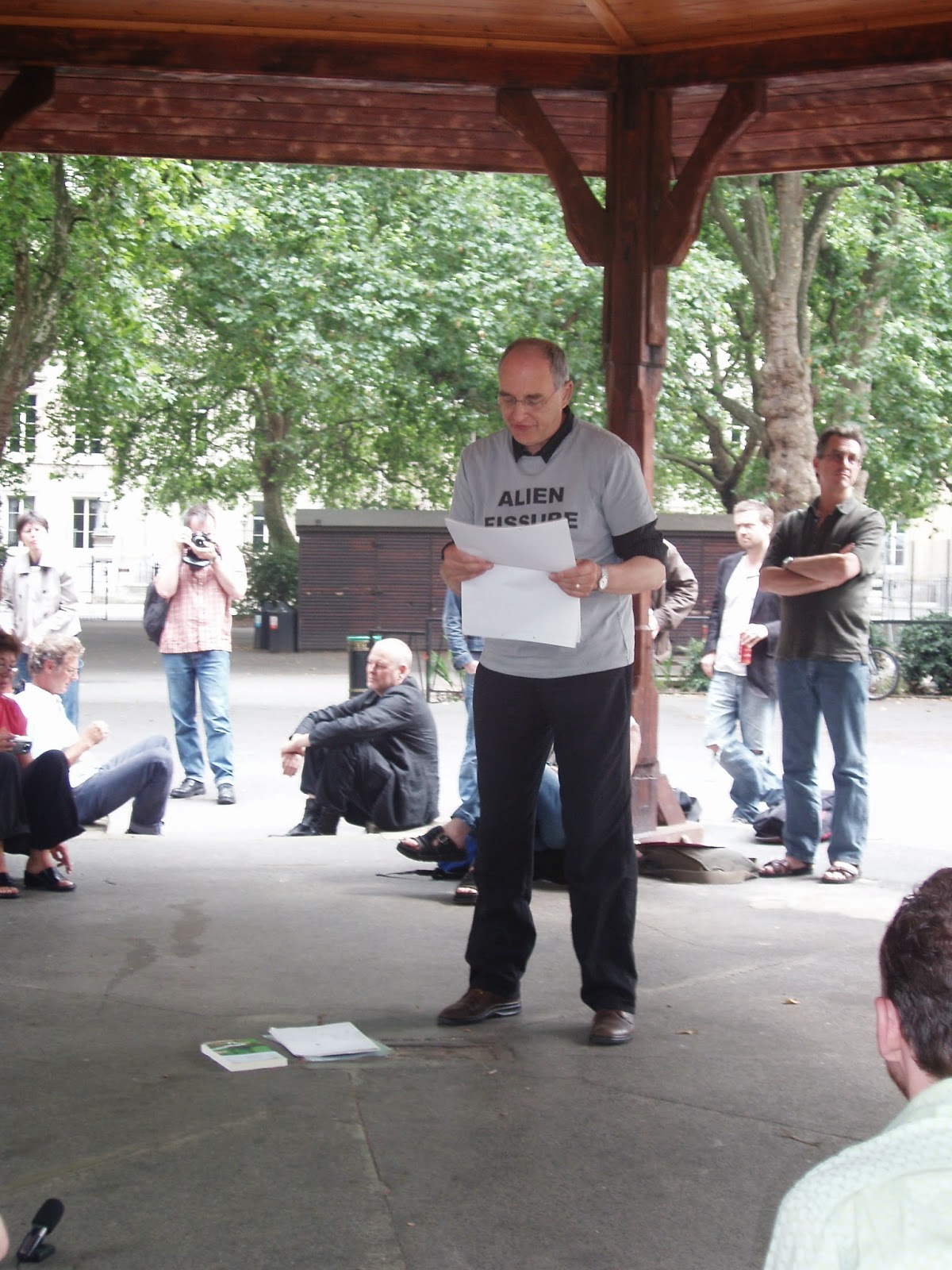 The two recently published books from Fisher’s Gravity as a Consequence of Shape (Gravity, Salt Modern Poets, 2004; and Entanglement, The Gig, 2004) give us the chance to assess about two thirds of the whole project. The performance text, ‘Mezz Merround’, on a previous posting/page of Pages, comes from the remaining third.

A ‘pertinent’ poetry, for Fisher, demands that it ‘deconstruct(s) consistent and chreodic memory’. The term ‘chreod’ – also spelt ‘chreode’ - comes from Waddington, in whose ‘biological terminology’, Fisher tells us, it means a ‘“necessary path”, whose charge is canalized once started in a certain direction’. Fisher both describes and enacts this process in the text Philly Dog, part of Gravity as a Consequence of Shape, published in 1995, but republished in Entanglement (p. 80) :

I am a homeorhetic system
of attractor surfaces of chreods, necessary pathways,
located in multi-dimensional spacetimes
in which crossovers correspond to catatrophes
Folds on the surface that suspend descriptive
referential functions and any temporal character
of my experience and lead into a world unfolded
by every narrative

Through techniques of textual rupture and jumps, Fisher’s texts ‘intuitively invent new memories’; reading is seen as a revolutionary act to divert consciousness along these new canals. Memory becomes a reinvigorated invention of perception. The techniques of creative linkage involve the reader in constructing otherness, from the different times and places of the text, along with a resultant polyphony of voices, or ‘plurivocity’ as Fisher puts it. Both of these things disturb the impertinent desire for consistency or a single referent in a discourse. The pathways of chroedic memory are disturbed by catastrophic crossovers. The world Fisher constructs for his reader in his own poetry is clearly modelled upon this poetics, as can be experienced in the discourses, times and places collaged in ‘Around the World’, republished in Gravity (p.15):

This gravitational song meted against displacement
The slow movement of holding you
By the lake, deep amid fir and silver poplar Dream sleep’s energetic function
During meditation each finger rayed in cactus spikes
Blake crossed out sweet desire, wrote iron wire
It was the discovery of human electromagnetism
made a sign, opened curtains, revealed the garden
Mouth perpendicular to mouth energized desire

In this poetry intertextuality becomes an image of experiential multidimensionality and plurivocity (as in Blake’s deleted ‘desire’ which hints at contemporary usages of that concept, such as Kristeva’s). As another of Fisher’s poems says, though in ironically painless lines:

The quantum leap
between some lines
so wide
it hurts.

The effect of the disruptive flow of many poems in Gravity as a Consequence of Shape is to foreground textual ‘cleavage’ as both the division and holding together of materials in the very metaphor of Fisher’s title: gravity. Without this textural energy or dynamic, everything flies apart. The speed of the shifts determines the pace. He calls Mottram’s technique of breaking syntax to produce rhythm in ‘phrasic positioning’ a ‘quantum-jump methodology’; in Prynne’s work, ‘the aesthetic of his selection tensioned in collisions of the same set (or line)’ in Down where changed, has a similar effect. These are precisely analogous to the flickering aces, the hinged lines, of Raworth’s characteristic practice, as well as Fisher’s own.

In a note on poetics, written in 1995, and published in West Coast Line, Fisher is particularly candid about his method of text-construction in Gravity as a Consequence of Shape. He describes the three overlapping stages of composition as ‘research, selection, and presentation’. I shall examine a short part of a particularly effective poem, ‘Birdland’, from the first, 1985, showing of the project, Brixton Fractals and republished in Gravity (p. 80). The volume’s title is almost an index of creative linkage. On the one hand, it denotes the troubled London borough that has furnished Fisher with much of his poetry of place. On the other hand, a fractal is an irregular action or shape, such as a cloud or a coastline, which is complex, though not now impossible to measure mathematically, and to establish the laws which govern its shaping. Fisher’s point is that the place in London where he lived through its years of deprivation and riots is traceable only by his irregular technique, particularly in ‘Birdland’, where he tries to connect the place in its sexual, ideological and linguistic shapings:


Endless destruction
makes Brixton
Call it coexistence of prohibitions and
their transgression
Call it carnival and spell out jouissance and horror,
a nexus of life and description, the child’s
game and dream plus discourse and spectacle.
On the edge
of death High Road, the Busker
starts up a reel, it begins as dance interlaced
with anger. I guess at the ridiculous partners
that perform. The busker dances with
her saxophone
‘Ideas of Good and Evil’ are subsumed into this nexus,
production knots and
unknots paranoia
Blake stands his ground
on the Common asks, Are
Her knees and elbows only
glewed together.

Shadowy traces of selected ‘research’ are perceptible: quotations from Kristeva as Fisher’s Mottram-like ‘resources’ confirm, and also the remark of William Blake, a notebook jest about marriage and sex. But the quotations are not isolated, as in the spatial collage of The Cantos or even of Fisher’s earlier open field Place. Indeed, ‘research is adumbrated and imbricated with personal research from an accumulation of notes from living experiences’ - in other words, the two kinds of discourse, the found and the ‘autobiographical’, overshadow and overlap one another. This mode of creative linkage is visible in the opening four lines, where notes on Brixton catch the faint echo of the choral lines ‘Call it ... Call it’, with their unannounced capitals and their authoritative academic identification of contradiction. The reader’s impulse towards syntactical cohesion allows the imbrication to occur, although this is only slenderly satisfied. Fisher is careful, in this creation of ‘new memories’ by creative linkage, to hold off the gratifications of seamlessly conventional syntax. In the best of these poems the linkage holds traces of its disjoining, the illusion complete enough for the creation of ‘new memories’ but never descending into the illusory; they are precisely ‘jumps from tensioned collisions’.

The Busker (one of the many ‘characters’ that haunt this almost-narrative) takes Blake into her strangely ambivalent performance, is questioned cheekily by him, even, and is positioned precariously ‘On the edge/of death High Road’, where the line-break (one of the decisions of the presentation stage) minimizes the obvious disjoining link whilst preserving its visibility. The edge of death is a moment not a place; on the edge of the High Road is geographically locatable. Time collapses into space. Throughout the poem contradictory actions, or contraries, such as Blake’s Good and Evil, ‘discourse and spectacle’, dancing and anger, all ‘ridiculous partners’, are situated, through creative linkage, in their ethical relations, in the paranoiac productivity that is Brixton. Busking itself is semi-legal, a literal ‘coexistence of prohibitions/and their transgression’. The ‘disruption of autobiographical voice through the use of many voices, aspiration to multiple and collage form through the pasting of many sources,’ is clearly visible, to create new, but artificial, memories of ‘many spacetimes’.

The reader witnesses a constantly interrupted narrative, yet sees text as textual, and sees the links which are simultaneously joining and disjoining, ‘process-showing’ as Fisher had earlier called it. Indeed, the whole process of the project Gravity as a Consequence of Shape has been shown to the reader. William Blake also provides one of the project’s structural homologies. Gravity as a Consequence of Shape is modelled on Blake’s Notebooks, which are mapped across the project; quotations from it (as in ‘Around the World’ and ‘Birdland’) are sometimes juxtaposed at the selection stage with other materials. The titles of the poems (and the order of the project) derive from an alphabetical list of 188 dances, drawn up in 1982. First published in Ideas on the Culture Dreamed Of, the list of titles runs from ‘Accretion’ and ‘Acuity’ to the recently completed ‘Zeitgeist’, ‘Zig Zag’ and ‘Zip’. Across this necessary path the project dances its variations; one thing is certain: the large scale self-interruptions necessitate that Fisher will not write them alphabetically. Thus ‘Mezz Merround’ is near the end of the writerly process, but not the project’s XYZ. The chreods’ pathways pointed towards complexity.