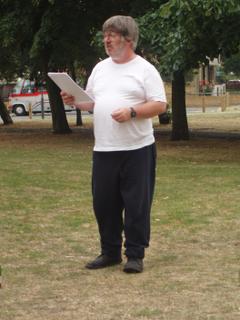 Lawrence Upton at the Poetry Buzz

Face of a sheep. Full face, head on and close up, becoming clouds, already fluff and without substance. White beard thick black pullover. One ear ring from an invisible ear. The other ear is a small darkness.

Of Mephistopheles, I think. Goatee chin divides a dress shirt. Ears decorative. The sounds they hear are rolls of velvet. Eyes fibre optic, through the snow, raising the temperature.

Despatch rider one way, chimpanzee the other. Two heads stuck into jelly. One skull. One life.

Earphones are the largest element. Sphere of the skull glimmers more than half transparent. Light from the west. It is daytime in the back of his head. I wonder what he's listening to. Hair short. Possibility of a beard.

All there was once has burnt up. His face is in woolly ashes. Jowls and a porous nasal cavity. Chin a frozen waterfall. Clouds in the eyes.

Her Royal Highness is accompanied by a rabbit. The rabbit is convincingly drawn. The Royal She is all hair and implication. Two ears stick up like a rude salute.


A blind monkey is tapping his way, brick by brick, over a garden wall. A policeman in overalls is standing below, watching, with his wife standing beside him. From out of their backs, electric cables run to a temporary junction box on the back of a delivery lorry.

The policeman stands a little forward of his wife and is more in the street light, while overhead the sun glows in a plain blue sky; and his cheeks are clearly broken by jagged streaks of tumbling water. He is covered by small streams; across his forehead, in outline, two monkeys groom each other on a river bank.

From the left, where there is poor illumination, despite the violent sun, come men with similar faces.

From the right, walks one man, obviously sighted, carrying a camera which he does not seem prepared to use.

A small jet just clears the end of the wall, as it cuts through a portion of the picture. Beneath it, a disconsolate man seeks to use a public telephone.

One window in the street is open. Inside are visible a bed; a mirror, tilted at an awkward angle; and a small caged bird attacking its own reflection.


Lawrence Upton is a poet who works in many forms. These two texts he read at the Poetry Buzz, but they only represent one aspect of his work. I have a bulging file of small booklets, large booklets, proverb-posters, folded sheets, birthday cards, etc, not to mention his collaborative works with Bob Cobbing (they are in a separate file). See also his Reality Street volume Wire Sculptures. 'Coldharbour Portraits' was published in endNote # 2 (Canada - edited Beaulieu) & On word 1 (edited Cobbing) 'Pictures/Cartoon Strips' is due out in a book of that title from Sound and Language.