Malcolm Lowry: From the Mersey to the World 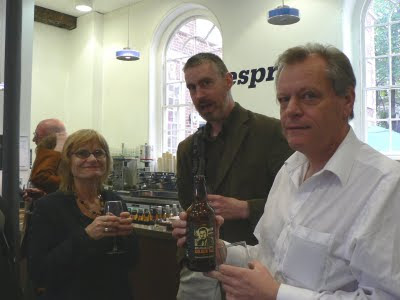 Celebrate the Centenary of Wirral-born writer Malcolm Lowry at the Bluecoat in Liverpool.

Their celebration of Malcolm Lowry (1909 - 57) features a special centenary exhibition and a programme of performances and events.

His Under the Volcano, set in Mexico and written in Canada, is considered one of the most significant 20th century novels, and has influenced painters, filmmakers, choreographers, musicians as well as writers.

This exhibition brings together artists from Merseyside, the UK, Mexico and Chile, each relating to Lowry in different ways.


An illustrated book, Malcolm Lowry: From the Mersey to the World, published by Liverpool University Press in collaboration with the Bluecoat and edited by Helen Tookey and Bryan Biggs, includes images from the exhibition and texts by Lowry's biographer Gordon Bowker and others, and was launched on Thursday. It includes two Edge Hill writing staff, Ailsa Cox and Robert Sheppard. Ailsa has written a short story. I've submitted an account of visiting Lowry's grave (in my native Sussex). See the image taken at the launch event at the Bluecoat on Thursday, above right, featuring Ailsa, Mark Goodall, another contributor to the book, and me holding up the specially-brewed Wapping Brewery Malcolm Lowry Golden Ale so that yet another contrubutor, Colin Dilnot, could snap it for his Lowry website, link below.


In 1979 I visited Lowry's grave in Ripe, Sussex, and wrote a long poem about the event, which I never published. Returning to the text thirty years later (it was part of my MA in Creative Writing at UEA) I have 'written through' it, commenting on the poem, and in particular on the unused notes left out of the piece (which seem to me more revealing). Adding to this, descriptions of photographs taken on the day, and several quotes on and about Lowry, it amounts to a celebration and critique of the 'clinker-built brilliance' of Lowry's writing, and a reflection upon writerly process, a poetics.

For further investigations of the local origins of Malcolm Lowry and its influence on his writings see Colin Dilnot's extensive blog Malcom Lowry At The Nineteenth Hole.
Posted by Robert Sheppard at 10:36 am