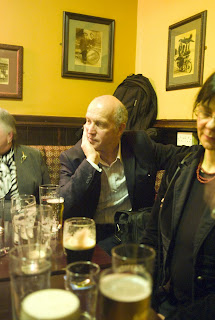 (Image (c) Tim Power). Tim Power's photograph of Iain Sinclair relaxing in the Buck i'th'Vine in Ormskirk was taken after Iain's reading at Edge Hill a year or so ago. Read previous postings:

And Robert Sheppard on the Social Poetics of Iain Sinclair which is accompanied by another photo of Iain, taken by Tim Power, at the reading itself, and is followed by Sheppard's writings on Sinclair's early poem Lud Heat.

Here is an account of Sinclair's later visit to Liverpool to help celebrate the work of Malcolm Lowry.
Posted by Robert Sheppard at 4:25 pm