Robert Sheppard: Say When (outtake from Words Out of Time)

Outtake of ‘With’ from When, third part of Words Out of Time to be published in 2015 by Knives Forks and Spoons. (Buy here.) 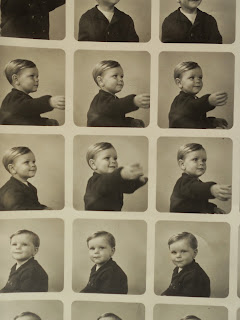 Even though these sentences are cut from the long conceptual piece using old photographs (not the one above), I wanted to share it with anybody who might be interested. It was originally in 'With', the first part of 'When', itself the third set of autrebiographies.

A Christmas chaos with wrapping paper carpeting the afternoon. Sea crash with storm clouds. My mother’s buried in sand, but looks as though settled into lunar dust with determination. With determination, children scurry up the scree. My aunt as a young woman takes off her sunglasses and sits in one of the low metal folding-chairs with her full skirt covering it. My father with me on the golf course, watching me putt. My mother, with cardigan wrapped around shoulders, emerges from the rocks. Between the caravan and the Triumph Herald my mother rests with a cup of tea. My aunt bends low to greet her niece, with the bouquet still in her hands. The crowd of children peep round the hidden bridesmaids as my mother poses with my father. My father’s shadow reaches my mother’s feet as she clears up the roadside picnic with my uncle and aunt. The prow of The Victory with its giant anchor. Is my father part of this pyramid of bathers with the mountains of 1940s Hong Kong in mist? My father sporting a compact moustache stands with my mother under umbrellas before arches of granite. My father sporting a sunhat indoors cooks with my mother in the improvised kitchen. My mother with TREGUTH inscribed on the thatched cottage wall above her, distant. A ghost house with phantom children on the steps. My father with me on the boat, letting me think that I’m steering. My father is the only person at the table with wine in his hand, his honest eyes twinkling cheers among the tax dodgers and spivs. My mother having trouble with the caravan key. My grandmother and aunt smile the same smile, with my mother looking down, embarrassed. My cousin picks confetti from her hair with knees shaking around her. My mother with my grandmother at Windsor Castle, the wind blowing her hair awry. My mother as a giggling girl, my aunt as a smiling girl, with the tall woman, the toddler on the wooden horse taking my mother’s resistant hand. My friend and I stand uneasy in our robes, hats not designed for long hair, with 1977 degree scrolls in our hands. A strip of unknown Observer in RAF uniform with a stripe of decorations. My mother crouching on a rock in her swimming costume with only a painfully rocky walk to the sea-weedy shore. Ornamental garden with copper beech. A rainbow parachute billows with life on the runway at Shoreham. Blurred Labrador with a collar. Colour slide of wedding with one red coat. Mugshots of my mother with attempts at poses. The First & Last House in England with its joyless flag, my father’s hands in his pockets. My mother with my grandmother dwarfed by blossoms. With jumper over one shoulder, bag over the other, my mother strokes a cliff-top donkey between the eyes. My mother sits with me on the ship, my nose and cheek the only features under hair and out of beard. In the Polaroid, I look sidelong at my mother with the eyes of a celluloid murderer. Camera round my neck, I’m ready, my mother standing under the thatch, with my father’s arm across her shoulder. I stand on deck, my face still, with my hair a thick tangle. Snow above ankles, I submit to snowballing, with my mother and aunt laughing from the steps. On Hove Lagoon my father and I look back to my mother on the quay, as he rows us out with ease and care.

Posted by Robert Sheppard at 5:22 pm