Robert Sheppard: ‘the tildes outside language were not pronounced’: Some Notes on the Transubstantiation of Geraldine Monk’s Poetics part one 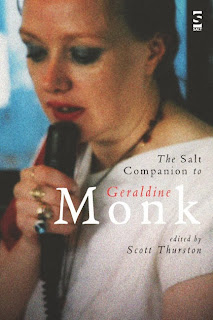 Poetics as a speculative, writerly discourse often concerns itself with how a text has, is, and will come into being, particularly in terms of form. This can be general, as when Charles Olson, in the canonical ‘Projective Verse’ essay tells us that in projective verse, as opposed to ‘print-bred’ poetry,  ‘Breath allows all the speech-force of language back in (speech is the “solid” of verse, is the secret of a poem’s energy)’. (Allen and Tallman 1973: 152). On the other hand poetics can be particular, as in the moment in Denise Levertov’s ‘Some Notes on Organic Form’ when she describes a potential poetic composition: the poet, she says,

is brought to speech. Suppose there’s the sight of the sky through a dusty window, birds and clouds and bits of paper flying through the sky, the sound of music from his radio, feelings of anger and love and amusement roused by a letter just received, the memory of some long ago thought or event associated with what’s seen or heard or felt, and an idea, a concept, he has been pondering, each qualifying the other; together with what he knows about history; and what he has been dreaming – whether or not he remembers it – working in him…. But the condition of being a poet is that periodically such a cross-section, or constellation, of experiences … demands, or wakes in him this demand, the poem.’ (Allen and Tallman 1973: 313) [i]

For Olson speech is the central energy of the poem; for Levertov, speech is summoned by experience(s), and triggers the need for the poem. One is a theoretic of composition; the second is a phenomenology of writing.[ii]

Geraldine Monk, in Insubstantial Thoughts on the Transubstantiation of the Text, takes a different form, though she expounds both principle and offers phenomenology (and the Olson-Levertov quotations have been selected not just for methodological contrast but for their relevance to Monk’s piece). As her title suggests she is concerned less with making a text than in its subsequent changes of form, its transformations, although the word ‘transubstantiation’ suggests that changes in form, however mysterious, are material processes; they are as suggestive as Levertov’s demanding poetics, but as ‘solid’ as Olson’s contentions about verse. Her poetics is less concerned with the moment of making, of poesis, than others. I take it that the italicised prose passage (and note how italics are used by all three) that appears five times intact at the head of each section (and again scattered throughout the text in echoic fragments) is describing the initiatory process whereby a poem comes into being, but with a bluntness and emphasis that contrasts with Levertov’s leisurely roll-call of potential influences:

More than meat or drink. Better than stars and water. Words birthed. Made flesh. Took wing. Horrids and enormities. Chantcasters. Daubing lunarscapes.
More precious than inner sustenance (food and drink) and outer sustenance (the sky and the earth), the poem comes into being, this suggests, but it is ‘made’ and remains obdurately material, substance, flesh. Released into the world – on wing – it gathers its subject matters (‘horrids and enormities’ both). The word ‘chantcaster’ (also used as the title of three poems in Interregnum) could describe either the poet, broadcasting a chant (with its suggestion of magic spell), or the poem in the act of dissemination, or both in the transformative action of poet-performance.[iii] The final phrase ‘daubing lunarscapes’ (also the final phrase of the entire text) is made substantial in the 2002 edition by Alan Halsey’s two illustrations of moon-like circles (though they appear scratched and speckled rather than daubed). It suggests the deliberate but not necessarily precise creation of an other(ed) world, literally a picture of another world. ‘There is actually no such thing, in the temporal movement of the poem, as an exact repetition,’ says Derek Attridge, that reminds us that the fivefold repetition reads differently in relation to its formal reappearance. (Attridge 2013: 48) Without itself changing substance, it formally transubstantiates at each re-encounter as the reader forms the poem. When we remember that phrases reoccur in different formations, then Attridge’s observastion that ‘every apparently new appearance, if it appears, is constituted or mediated by the familiar; every repetition, repeating itself in a specific here and now, freshly contextualized, is different.’ (Attridge 2013: 48)[iv]

The essential formal feature of this act of poetics is that it is also a poem, and therefore is a specialised kind of poetics, one that appears in the literary work itself, for here the entire poem is poetics. Frances Presley calls it ‘her verse essay on types of poetic reading’. (Presley 2007: 140) As a literary work it formally enacts what the poetics proposes. Perhaps the ‘insubstantial thoughts’ of the title are so, not because they are slender and lack ‘substance’, as we say, but because they have sunk the material of poetics completely within the formal flow of a poem. To read the piece only as a poetics statement as I have above commits the heresy of paraphrase since few of its contextual and formal poetic properties are acknowledged in such a reading. The Biblical ‘made flesh’ resonates with ‘transubstantiation’ of course. The very repetition of these clipped phrases throughout the rest of the poetics ensures that they are re-figured, even transubstantiated, by the fresh contexts, although they retain their distinct italics. The fact that the word ‘escapes’ may be heard echoing into the silence in the last two syllables of ‘lunarscapes’ suggests that the poem is not just finally othered as a single ‘lunar’ object, but ‘escapes’ finality, opening towards the possibilities of transubstantiation, one formal substance changing into others.

See all the links to my work in progress The Meaning of Form here. And here are raw links to the rest of these 'tildes' posts and to other pieces specifically relating to Monk and performance:

These posts are on music (and on an abandoned project on poetry and jazz) and on Monk’s collaborations with Martin Archer and Julie Tippetts:

http://robertsheppard.blogspot.co.uk/2014/05/robert-sheppard-listening-to-fluvium-by.html
[i] This description seems to owe to T.S. Eliot’s more famous poetics statement about the ‘mind of the poet’ which I elsewhere categorise as an example of the revelation of poetics in literary criticism.  Eliot’s essay ‘The Metaphysical Poets’ (1921) contains a memorable passage that describes the multifaceted complexity he located in John Donne, but in terms which are obviously constructing the poetics of The Waste Land, which he was then composing. The slippage from Donne to typewriter is a giveaway.
[ii] I am not suggesting that the essays as wholes demonstrate this dichotomy, merely the instances I have quoted.
[iii] See my chapter on Maggie O’Sullivan for a different take on somatic poetics, using Bakhtin, in The Poetry of Saying.
[iv] This reading, already lengthy, does not follow this effect through close reading.
Posted by Robert Sheppard at 5:28 pm