Robert Sheppard: All the Little Presses that Fly with the Phoenix in the Sunshine 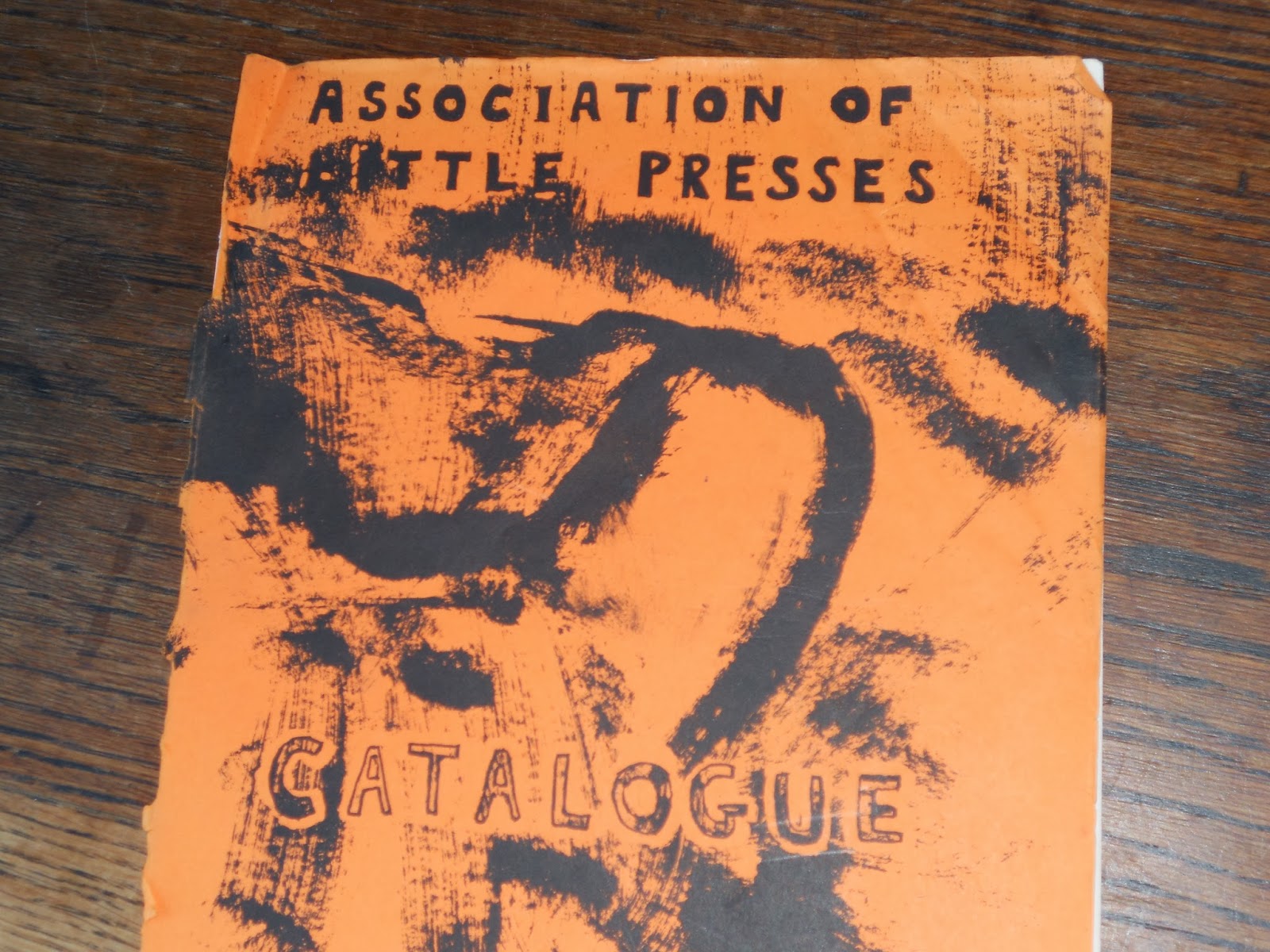 Parts of a Keynote Lecture at the ‘Writing and the Small Press’ Conference at the University of Salford, March 2012.

(There is a fine review of the conference by David Kennedy in Journal of British and Irish Innovative Poetry, Volume 4: Number 2: September 2012.)

I like and, as you’ll see later, I distrust, the arbitrary alphabetic democracy of the academic bibliography. It pleases me to see

in the ‘works cited’ that completes one of my essays;

or (to stay with Ken Edwards’ press Reality Street or its precursor Reality Studios, for a moment) to spot

This is a fugitive self-publication by Edwards, a Spartan mimeographic production, largely forgotten, rubbing alphabetically-contiguous slightly-foxed covers with an acknowledged classic of post-War poetic mediocrity, one re-designed smartly through many trade editions:

I like all this because it says: this small press book is as important to my essay or article as the one published by the mainstream press. Indeed, there is more on Fisher than on Goethe and definitely more on Edwards than on Larkin in their respective episodes in my book When Bad Times Made for Good Poetry. I like it simply because it allows Reality Street to announce its vital mediation of the work cited on a level field of literary production with OUP and Faber and Faber. I like all this because the names of small presses are often colourful compared to those of many commercial presses: they intoxicate the sobriety of the bibliography. As Nigel Wheale said: ‘The only opulence which small presses and magazines traditionally allow themselves is their name’. (9) For example (and in alphabetical order):

Talking about the small or little presses can feel like cartography of a peculiarly Borgesian kind: if you’re not careful, the map you make turns out to be the size of the territory; it’s all or nothing. Summary fails the totality. But I distrust the temptations of the publisher’s list, the enchantments of the alphabetic bibliographic, which leaves us insensible in the face of informational overload. Bibliographic democracy evades (for a moment only) the true configurations of the power relations of the poetry world, say between the respective economic and cultural capital of Reality Studios and Faber, their actual (though shifting) positions in the field of literary production. The academic representation of small presses, however masterly, as in Wolfgang Görtschacher’s two massive tomes, or in the recording of Mimeo Mimeo’s journal and blog, breaks down into publisher profiles, lists of published books and pamphlets, authors, dates, print runs, the minutiae of printing methods, paper quality, the all-important binding and – less often – statistics of sales, and accounts of distribution methods, the last two not always a good story. There are taxonomic distinctions between small presses and independent presses, private presses and commercial presses to be negotiated, between art books and small press books, in faintly fetishistic ways – and that doesn’t even begin to mention little magazines!
The archive or its burrowers provide additional addictive narratives: the technical histories of the little presses, with their branches in bibliography, librarianship, information science, in the Sinclairesque lore of second-hand and rare book selling, and in the practice and history of publishing generally. Such particularity is important for the complete mapping of an otherwise incognito bibliosphere, but this obsession with process and product (material production and material object) takes us away from the literature produced into hopeless business studies – by which I mean the study of largely hopeless businesses! The results are closer to studies of micro-breweries than to discussions of literary form or the poetics of contemporary writing, which is normally the focus of my work as a critic. (As a poet I’m obviously interested in the materiality of my books and booklets!) In short: I like all this detail, could wallow in it for ever, but I distrust its propensity to obscure the aesthetic, even where the aesthetics of book production itself is concerned. We build histories that are distinct from the history of writing, and from the practice of writing, at their perils.
However, before I attempt to bring history and practice together, I want to look back at an organisation called the Association of Little Presses, which was formed in 1965 by Stuart Montgomery of Fulcrum and Bob Cobbing of Writers Forum, and which continued through what I have seen described as the ‘golden age of the little presses’ – much under the influence of Bob Cobbing –  as a ‘loosely knit association of individuals running little presses who have grouped together for mutual self-help and encouragement’ (n.d 1990/1 cat), until December 1992 when Cobbing resigned (partly to spend more time with his family, or rather his family magazine: Cobbing Kith and Kin). ALP fell into almost immediate disarray despite having (by 1990) over 300 members, many of them publishing poetry. Two major casualties were the regular listings magazine PALPI (Poetry and Little Press Information) and the annual catalogue which carried publishers’ adverts and as comprehensive listings and addresses as was possible, and which was produced in editions of 500. In 1990-1991, I provided a concise introduction to the eleventh annual catalogue: it sums up much of what I felt about the little presses up to 20 years ago, and much since. Ken Edwards of Reality Street had preceded me 5 years earlier with his introduction in which he defined the small presses in terms that perhaps have more in common with Eastern European samiszdat than micro-publishing. The love – the sheer amateurism in its real sense – is what essentially divides the small presses from the professionalism of the big commercial presses, a world in which ‘market research has indicated the potential for another commodity’, in Edwards’ words. (1985) His themes – of community and commodity – are ones I consciously pick up in my introduction five years later, which is entitled ‘Perfect Knowledge’ and which was dedicated to the memory of the great publisher (and poet) Asa Benveniste who had died a few months previously.[1] 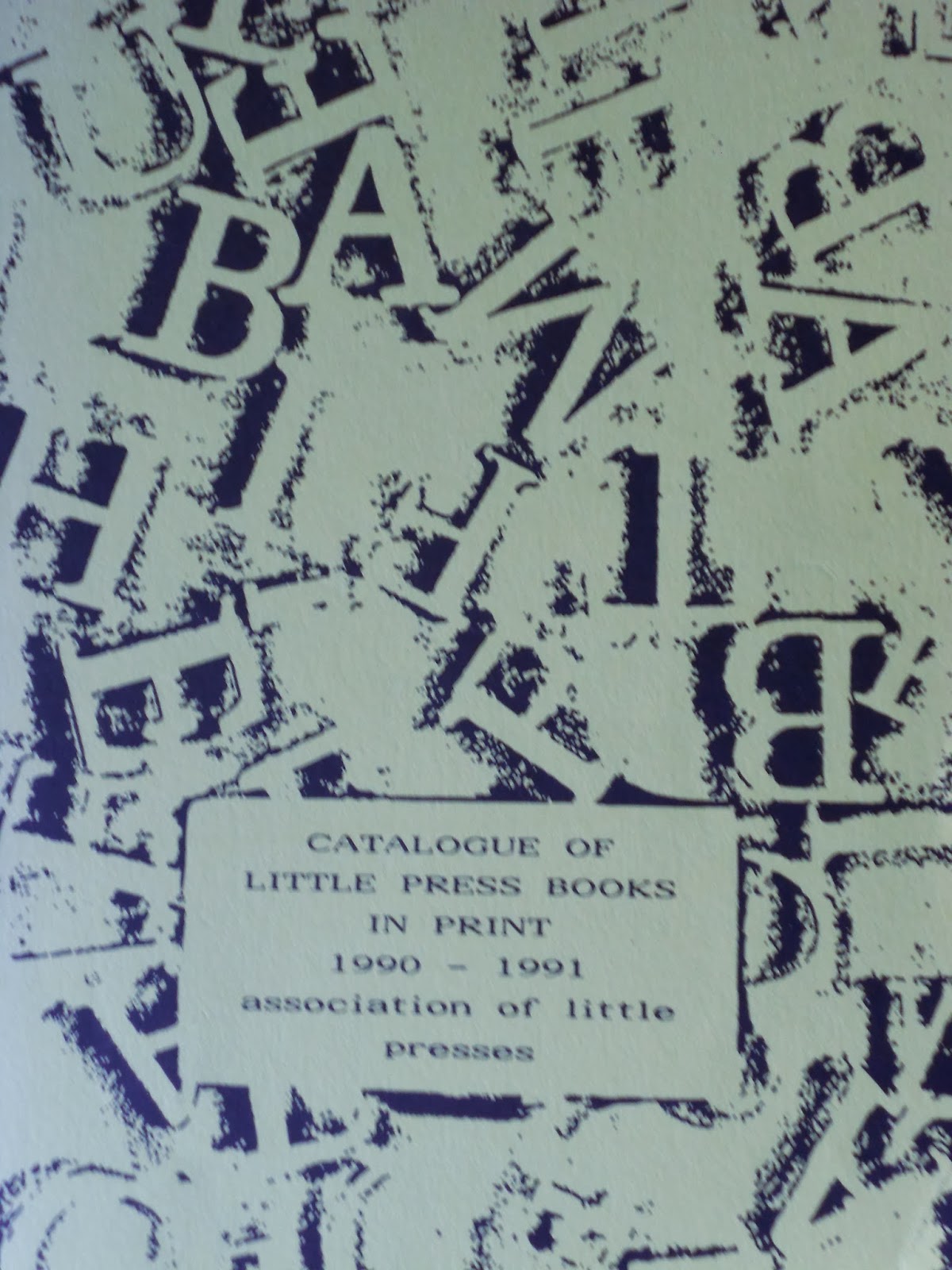 {At this point I read the document.}

The rest of the lecture was on the small press book forms of Bill Griffiths. Read it here.

Or link here for the full set of links to the emerging critical work (of which this post was prefatory) The Meaning of Form here.

You can read about my own recent poetry published by small presses here and here, and follow the links to points of online purchase. 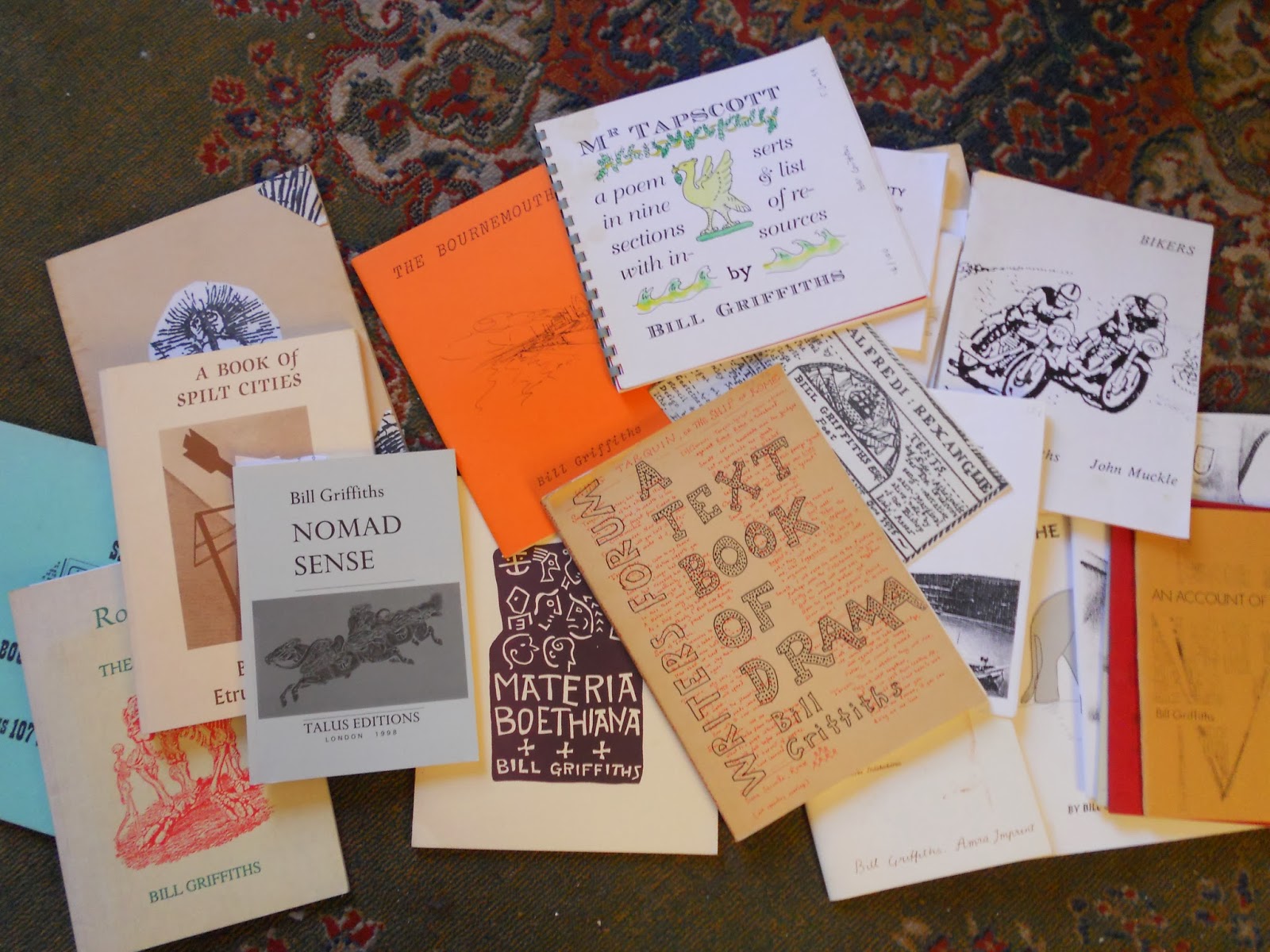 [1] Asa Benveniste of Trigram Press. Indeed, the issue opens with his Kabbalistic poetics essay ‘Language: Enemy, Pursuit,’ (1980) which feels out of place until you realise that ‘the black fire on white Fire’ of letter-press printing is part of his poesis, as he faces the bareness of word, the metaphysics of type, watching all that language falling to pieces, then thrown back together as a page of a book. I returned to Benveniste’s excellent selected poems Throw Out the Life Line Lay Out the Corse (1983) and wondered whether the impaction of the sequence ‘Dense Lens’ derived not just from a reading of Zukofsky but from the experience of typesetting sections of A for Trigram.

[2] Nigel Wheale sees it the other way round: ‘The current economic situation … has affected the publication of poetry by making established publishers unwilling to continue paternally with their poetry lists… This restriction has driven a good deal of writing into the arms of the small presses.’ (quoted in Brinton: 112)

Posted by Robert Sheppard at 1:47 pm