That’s the good news. There’s no bad news (so far as I’m concerned), but there is attenuating news: the paperback is no cheaper than the hardback. It’s £19.99. It is, however, over 300 pages long and is a bit more portable and compact in this form – and looks good! So thanks for Salt for doing this edition to replace the out of print hardback; its POD technology means it is available again (with the same great cover). 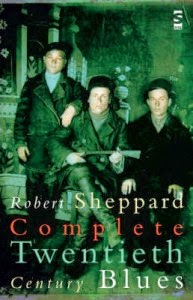 So if you missed it the first time round you can buy it here. Or here.

If you want to read my poetics piece about the intratextual poetics of the work, you can, here. This is an early take on a poetics piece that became part of the Blues themselves.

I read some of it here, at one of the early Other Room readings:

Robert Sheppard from The Other Room on Vimeo.

Todd Thorpe’s online review from Jacket is here. And here is a brief excerpt from the ‘Index’ to demonstrate how many of the texts are linked to others.

Twentieth Century Blues is a network (or ‘net/(k)not- work(s)’ as I called it) of texts that are interrelated by multilinear ‘strands’. That the project would seem open to the technology of hyperlinks has not passed me by, and I would like to utilise this in future presentations, although I conceived of the network’s design before this possibility, or its now apposite metaphor, became available. [Although I imagined it as a hypertext, the time-based nature of the project – the year 2000 as its limit - imposed a forward trajectory on its links which, it strikes me now, is alien to the multi-directionality of the hyperlink, which is why I call the work a ‘pseudo-hypertext’ in my ‘Introductory Note’.]
The strands are not sequences of poems in the usual sense and I doubt if they present interesting continua. (I’ve avoided constructing publications or poetry readings around such a scheme, except in the case of the ‘Killing Boxes’ strand, which was conceived and largely written as a performance work, in parts.) In any case, very few of the texts are only in a single strand, so to read through the strands would be as repetitive as reading the Blues in order. Strands are deliberately constructed or retrospectively discovered (dis)continuities between texts that I sensed as instructive. I hope a reader will consider them as part of the vast dialogic intratext of the project, but will not be over-directed by them. In fact, a few of the strands, as this full index shows, stretch back to texts written before Twentieth Century Blues. Their entanglements are part of the plot, as it were.

And here’s a poem in prose to demonstrate some of that:

The Book of British Soil

A suburb an airport a park, named after him; a refusal to mean this world. Beautiful tracer fire, the bosses sweating. Shadows of unbroken factories, streets called Alma or Trafalgar

Two holes enface her disguise. He planted a kiss in the gulf between her shoulder blades. He initialled her corpse, a statue to the Iron Terrorist

The colony at the heart of the empire gets the news before the news: immobilised eyes stuck in skulls, ragged wounds to be filled; bathing in self-evidence, a sigh of immense national relief

Dad’s big fist flooring Mum; she could be gouged from his forearms, burnt blue

There are no live casualties, soft-cruising over disused units

Look sexy for your sexy obituary. All the slips make the enemies friends, smudges of boot polish on the pillow

Each breath searches for its feeling. A rhythm of blows and kisses, she licks his thinking wound. He watches her sternly, selecting her skins from the shiny rails. Make up, making it up, with pencil and mirror, sweat erupting skin

Nerve agents work in a second. She kneels like a juddering protest whipped by rainbows. A nebula of blood cells behind her cloudy skin. His eyes, inland seas on a map of nowhere

A delicate hand waves farewell in the pane beneath the Union Jack. Recording tape hanging from the branches, the pop stars are re-building our sneers. Explanations airlift the empty hand of hand-shakes

Legible fear. STAB HALF BREEDS faded on the kerbstone

Tell this to the crying pilots: there are hulks of desertedness. At the stroke of nine, you reach the phone and the humming begins: Petrol is censored: Whitehall sealed off, eerie with snow

(NOTE: Twentieth Century Blues 28 means it was the 28th (out of 75) of the parts of the poem. The other ‘titles’ are strands: Duocatalysis 14 means this was the 14th piece illustrated by Patricia Farrell, a limited silk print edition; For Jo Blowers 2 means this was the second piece for collaboration with the dancer (with whom I am hoping to work again soon); Killing Boxes 5; ‘Killing Boxes’ was a strand of texts relating the FIRST Gulf War (not to be confused with Warrant Error years later); Unwritings 5: ‘unwritings’ is loosely my term for texts made out of my own earlier writings, in this case notes left over from writing the original ‘Killing Boxes’ poems, e.g., this one:

Take off to William Tell’s
turkey shoot the script aims
and again the litany asserts
mundane miracles and monsters revving
into tomorrow wishful thinking in
inverted commas the roads are
impassable even here where the
apple spit hits my neck).

Posted by Robert Sheppard at 12:19 pm